Back in 2018, YouTube ordered a series pilot for a television adaptation of the indie darling The Edge of Seventeen. The film starred Hailee Steinfeld as high school junior Nadie as she deals with her own awkwardness, the trials and tribulations of teen life, and the complications of her best friend starting to date her older brother. But the YouTube series pilot brought in Orphan star Isabelle Fuhrmann to play a new character named Mira, who would have endured some of the same struggles. Unfortunately, YouTube won’t be moving forward with an order for the Edge of Seventeen series.

News of the Edge of Seventeen series being canceled at YouTube comes from pilot writer Annabel Oakes by way of a response to a comment on Instagram. On a recent post completely unrelated to Edge of Seventeen, a fan anticipating the series asked for an update, and Oakes delivered the disappointing news about YouTube opting not to pick up the show. Here’s the comment thread, brought to our attention by Caillou Pettis on Twitter: 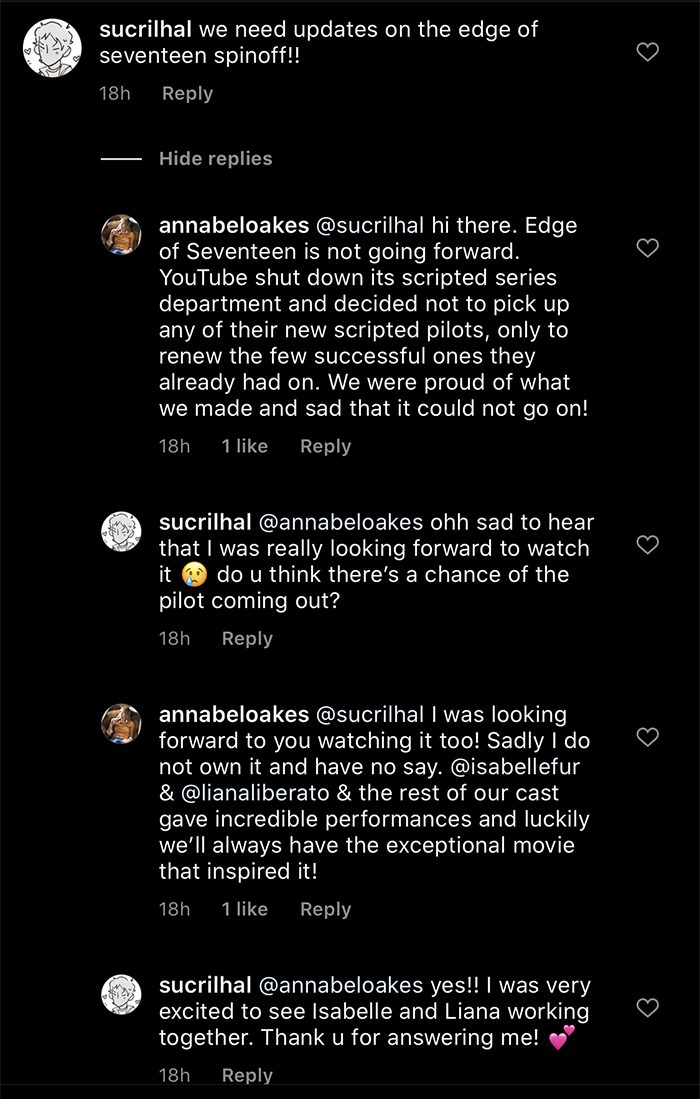 Here’s the official synopsis for the Edge of Seventeen series when the pilot was announced back in 2018:

Mira is a whip-smart underachiever trying to survive high school until the moment she can escape her hometown and loving, but messy, family. Socially, she’s a floater, along with her best friend Lou. A clique of two. But when things start to shift in their friendship, Mira will have to search her world for other connections to help her endure her seemingly endless adolescence.

Along with Isabelle Fuhrmann, the series had Liana Liberato (Hulu’s Light as a Feather) cast as Mira’s best friend Lou, and the series would have been executive produced by Kelly Fremon Craig, the director, writer and producer of the original coming-of-age movie.

Perhaps YouTube will be able to sell the pilot for the series to find life elsewhere. Or maybe that’s up to STX Entertainment, who was behind the movie and perhaps owns the rights to the potential series. It would be nice if this series didn’t disappear simply because YouTube couldn’t properly figure out how to get people to watch their scripted content. Perhaps another streaming service will get a chance to do a new version of an Edge of Seventeen TV series. Until then, at least we can go back and watch the fantastic movie, which is currently available to stream on Netflix.