Buffy Summers may have flunked the written, but the first Buffy the Vampire Slayer Mondo poster passes with flying colors. Two colors, in fact, as the gorgeous poster by artist Sara Deck, which depicts the iconic confrontation scene between Buffy and the Master from the season 1 finale, “Prophecy Girl,” comes in a dark purplish regular version and a bright red variant version. The Buffy the Vampire Slayer poster, alongside a new pin and a new Rich Kelly print of John Carpenter’s Big Trouble in Little China, go on sale at Mondo today.

Buffy the Vampire Slayer is one of the most beloved teen horror-comedy shows of the past 20 years, and yet it’s never had an art print commissioned for Mondo. That changes today, with Sara Deck’s “Prophecy Girl” print, depicting Buffy’s iconic prom dress and leather jacket combo that she wore in the season 1 finale to fight the Big Bad, the Master.

“The finale of Season 1, ‘Prophecy Girl,’ remains a pivotal moment for Buffy,” Sara Deck told Mondo. She is finally ready to face The Master, and despite knowing that her death has been prophesied, she is willing to sacrifice herself for the greater good. In this episode she discovers a well of strength and resilience within her far greater than she knew she had. Here she has truly embraced her destiny as THE SLAYER, and that was really important for me to capture with this poster.” 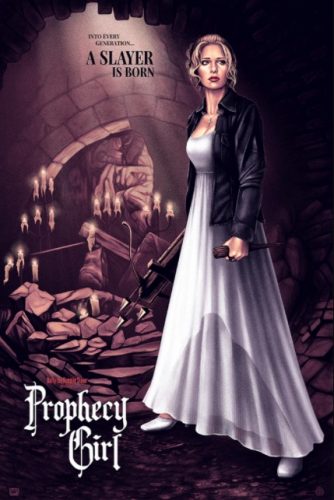 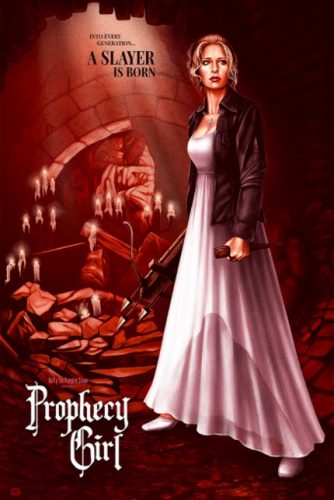 The regular and variant versions of the poster go on sale today on MondoShop.com at 11:00 A.M. CT. The regular version is a 24″x36″ screenprinted poster limited edition of 175 prints that can be purchased for $50. It’s expected to ship to the US and and other countries in July 2020.

The variant version is a 24″x36″ screenprinted poster limited edition of 75 that can be purchased for $75. It’s also expected to ship to the US and and other countries in July 2020.

To top it off, Mondo is also selling a new stained glass-styled enamel pin by Transylvanian illustrator Xul1349. The design shows Buffy holding a stake with The Master placed below in a die-cut tombstone-style packaging.

The Mondo Shop is also selling two new Big Trouble in Little China items: a new poster by Rich Kelly and a T-shirt designed by Paige Reynolds. The Rich Kelly 24″x36″ screenprinted poster is a limited edition of 250 and can be purchased for $55. The shirt, which is available in unisex sizes XS-4XL, is $25. You can see the Buffy pin and Big Trouble in Little China items below.

We’re super excited to reveal our first poster for BUFFY THE VAMPIRE SLAYER by @sara_deck_art & enamel pin by @Xul1349, plus a new poster for BIG TROUBLE IN LITTLE CHINA by @therichkelly & t-shirt by @paigereynoldsart. On sale tomorrow at 11am (CT) via the Drop. Link in bio.

The post Take a Bite Out of Mondo’s First ‘Buffy the Vampire Slayer’ Poster appeared first on /Film.