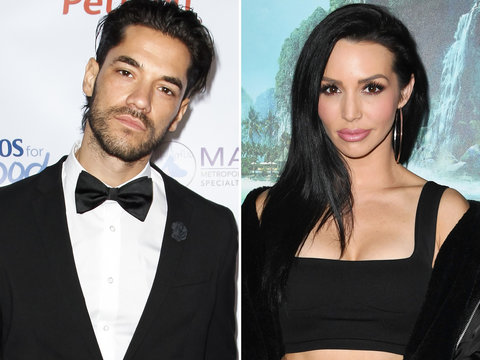 "Vanderpump Rules" star Scheana Shay is responding to her co-star’s claims that she’s a bad kisser.

Newcomer Brett Caprioni took Season 8 by storm when he said in the comfort of his very first confessional that he did not enjoy his one and only makeout sesh with the veteran Bravo star.

When TooFab caught up with Scheana at the "Fantasy Island" premiere earlier this week, she said she and Brett had recently spoken about the comment after running into each other at an event hosted by a mutual friend.

Scheana said Brett agreed, and the two ended up talking for four hours. "It was great," she said. "And I got back to a really good place with him."

"I think it was just — there was a lot going on for him last year," she said, careful to note she wasn’t necessarily excusing his remarks. "But he was just thrown into this, and I’ve been doing this for eight years, so I’ll give him a pass this one and only time. One chance."

Will Ferrell Spills on Snoop Dogg, Shaq and Prosthetic Testicles While Crying Over Hot Wings

During the same hour Scheana was labeled a bad kisser, she was also called "boy crazy." It’s not the first time Bravo cameras have zoomed in on her dating life, and when we asked how she felt she was being portrayed this season, she laughed ominously and said, "Am I allowed to answer that?"

"Here’s the thing," she said eventually, "I don’t wanna say it’s how I’m being portrayed, it’s just what you’re seeing I’m disappointed with because for the last three years I feel like you see me at SUR and with a boy. The only thing that changes is the style of the SUR dress and the boy. And there’s just so much more to my life over the last few years, especially, that you haven’t seen."

"Since my divorce, I have been through so much and I’ve grown so much and living in Vegas for half a year, headlining out there, my podcast for the last couple of years," she went on. "So it’s just kinda disappointing that fans don’t get to see all of my life. But I mean, everything I say on the show that you’re seeing, I said it, I did it. So it is me."

The reality star is currently dating a burly, long-haired lad who Andy Cohen recently described as a "big, Australian rugby player." His name is Brock Davies, he hails originally from New Zealand and is said to be 6’1, 250 lbs.

BiP's Chris Randone and Krystal Nielson: The Way They Were

Things with Brock are "so good," Scheana told us. "He is amazing. We’ve been traveling a bunch together. We’re working on a couple new projects soon that will be announced. And I’ve honestly never been happier. I feel like I’ve actually never been in real love before because I’ve never felt like this."

Above everything else, Scheana said the way the athlete treats her is his best quality. "He just makes me feel so loved, and I have not felt insecure for one second in this relationship," she said. "I just had to date outside of America, I guess."

Unsure if he’d make a cameo on a potential ninth season of the Bravo series, "assuming I’m still on it," Scheana said they would "cross that bridge" when they got there.

"He’s not like, ‘Oh my God, I wanna be on the show!’ But he knows if we’re still together next season, I mean yeah, that is something that would be important to show," she explained. "But he also doesn’t live in L.A. He has a business he runs in San Diego seven days a week. So if there is a Season 9, you’re probably not gonna see too much of him, but you never know! We’ll see."

Since we were at the premiere of a film about a vacation gone wrong, we asked Scheana if she’s ever experienced one.