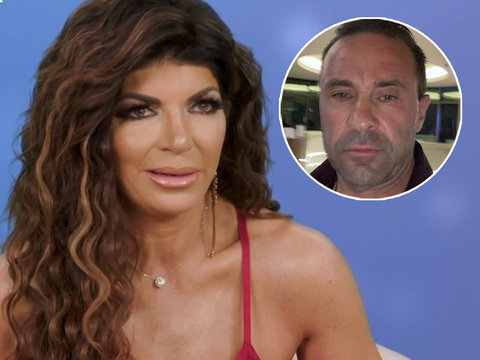 Teresa Giudice shocked her "Real Housewives of New Jersey" co-stars when she said for the first time on Wednesday’s episode that she believes Joe cheated on her during their 20-year marriage. She took the allegations a step further on the "RHONJ After Show," saying she actually confronted the alleged mistress.

The bombshell revelation came after Tre told her co-stars she found a "separate cell phone" Joe had been using to communicate with his ex-girlfriend’s sister back when their oldest daughter, Gia, was 3 years old.

"He just said it was to talk to this one person because they grew up together," Teresa told an off-camera producer on the After-Show. Seated next to her was co-star and childhood friend Dolores Catania, who was seething. She turned to Teresa and said the woman, whose name Bravo bleeped, "went out with Frank, too, okay?"

"Yeah, she gets around," Teresa replied, as both women shook their heads in disgust. To make matters worse, Tre added that the woman was also "training me at the time."

"I never had proof. I asked!" she explained. "I confronted her. I confronted the girl, and she denied it, of course. So I never got proof, so that’s why I got over it. But now, because of everything that happened, I play it in my head. Like, this, this, this, this."

The excuse Teresa said she got from Joe was that he was simply "helping" the woman after her divorce by "trying to sell her house." Teresa believed it outwardly and locked away whatever hurt or sadness she felt to keep the peace and her family intact.

The two went on to have three more daughters together, but the rumors of Joe’s infidelity never stopped.

"Listen, I don’t think it’s news to anybody’s ears that Joe was cheating on Teresa," Melissa Gorga said in a show confessional last night, before Bravo showed two incriminating clips from over the years. The first was the time Joe referred to Teresa as his "bitch wife" and a "c–t" while he was making a mysterious phone call in Napa Valley in 2013; the second was in 2015, when "RHONJ" alum Jacqueline Laurita told Tre at a reunion taping, "Honey, you walked in on your husband when he had someone on the desk in his office! You told me that!" Joe denied cheating in both instances.

As Melissa pointed out during the episode, "the news here is that Teresa’s finally admitting it."

"The Real Housewives of New Jersey" airs Wednesdays at 8 p.m. on Bravo.