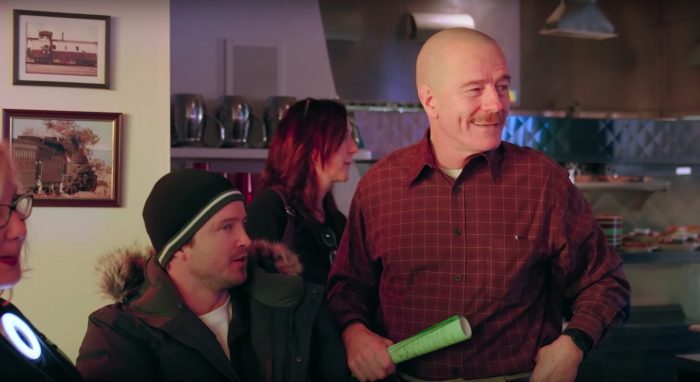 AMC has been playing a marathon of Breaking Bad in preparation for the on-air debut of El Camino: A Breaking Bad Movie this Sunday, but nothing hits that nostalgia harder than Bryan Cranston in a bald cap, warmly talking about reuniting with his longtime co-star Aaron Paul.

Netflix has released a new El Camino featurette ahead of the film’s AMC debut, which comes four months after the Breaking Bad movie premiered on the streaming service in October. The featurette goes behind-the-scenes into how that buzzy Breaking Bad reunion came together, and just what was underneath Cranston’s voluminous bald cap. Watch the featurette below.

One of the buzziest moments of El Camino when it premiered in October was the unexpected Breaking Bad reunion between the dynamic duo of Bryan Cranston’s Walter White and Aaron Paul’s Jesse Pinkman. In a flashback that took us all the way back to season 2, when the science teacher and his former student teamed up to cook meth, Walter and Jesse quietly pondered their situation while Jesse wolfed down pineapple. Apart from Cranston’s distracting bald cap, it was a pitch-perfect recreation of the warily affectionate dynamic between the two, and a nice dose of nostalgia amid Jesse’s suffering through the events of El Camino. And according to the behind-the-scenes featurette, both Cranston and Paul felt the same torrent of emotions.

“It felt cool sitting down with Walt at the diner and having the RV in the window,” Paul said in the featurette. “It was so surreal. I mean, Bryan and I, in between takes, just wanted to look at our old workshop where we spent so much time.”

“You’re doing the scene, and you look up and Vince is talking about a beat or a moment, and whoa I just had a flashback to when we were doing the series!” Cranston added.

The featurette comes just in time for El Camino‘s cable debut on AMC on February 16, 2020, four months after the Breaking Bad movie premiered on Netflix in October 2019.

The post ‘El Camino’ Behind the Scenes Featurette: Inside the ‘Breaking Bad’ Reunion With Bryan Cranston appeared first on /Film.