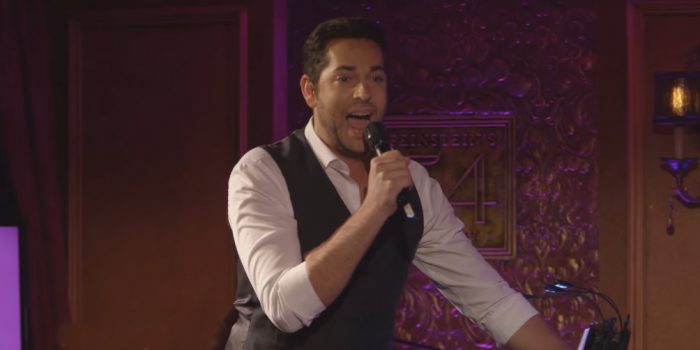 Zachary Levi went from being a nerdy spy in Chuck to a kid-turned-superhero in Shazam!, and now he’s about to become an aging rocker desperate for a paycheck.

Undercover is a new music-driven family comedy from Lionsgate and Mandeville Films that will have Zachary Levi joining a wedding cover band led by Riverdale star Cole Sprouse, one-half of the twin brothers (now grown up) who starred in Big Daddy with Adam Sandler.

So stoked to announce my latest project “Under Cover”, starring (so far) the uber talented @colesprouse and myself, and to be directed by my pal #StevePink! Y’all, this is gonna be a real humdinger! ? A big thank you to @lionsgate @mandfilms @liebermantodd et al for believing in this project, and trusting me to lead it. It’s gonna be chock full of heart, humor, and some of the most iconic tunes of the last 50 years, that I get to SING!!! Let’s party. ???

Zachary Levi announced the Undercover movie on Instagram, but Deadline has some extra details on the story. Levi will star as Jack, a down-on-his-luck rocker and father who secretly joins a wedding cover band in order to make ends meet. The young musicians are led by the misfit Ben (Cole Sprouse), and surprisingly, the band starts gaining a reputation. But of course, Jack can’t keep the secret forever, and he’ll learn some life lessons while also teaching Ben to see himself as more than a misfit and really find his voice.

Even though being a family comedy comes with the potential of being slapsticky and hammy, Lionsgate Motion Picture Group President Nathan Kahane’s mention of School of Rock in an official statement sounds encouraging:

“Like School of Rock and Pitch Perfect, Undercover is a movie that unites audiences with the way the cast interprets and performs familiar songs. Not only is it hilarious and charming, but it’s going to be a blast to see personalities like Zachary and Cole own their performances of so many classics.”

Those are two great music-centric comedies to reference, but that also gives Undercover a lot to live up to. However, it helps that the film will be directed by Steve Pink, who has given us some great John Cusack movies like Hot Tub Time Machine, High Fidelity and Grosse Point Blank, the latter of which he wrote. But this time, the script comes from Amy Talkington, with revisions by Jonathan Igla, Diablo Cody, and Chris Hazzard & Michael Fontana. Plus, Jonathan Levine is serving as an executive producer along with Alex Young at Mandeville Films. The Muppets producers Todd Lieberman and David Hoberman are also on board, so this isn’t a bad group of talent at all.

As for Zachary Levi playing a rocker, you might not know this, but he’s a rather talented singer. Not only did he do his own singing for the Disney animated fairytale Tangled, but he also earned a Tony nomination for starring in the stage musical She Loves Me in 2016. Here’s Levi singing his heart out at the 70th Tony Awards:

The post Zachary Levi Will Rock Out with Cole Sprouse in ‘Undercover’ appeared first on /Film.

9 This Is Us Tissue Moments Ranked: Everything Boils Over and Explodes at the Cabin
Casting Cole Sprouse Comedy Lionsgate Films Musical Steve Pink Undercover zachary levi