Chris Chibnall the overcompensating writer is back with “Can You Hear Me?” — a bloated Doctor Who episode that fumbles its message on mental illness with retro callbacks and far too many mysteries.

The seventh episode of season 12 ends the hot streak that Doctor Who had been on lately, due to showrunner Chibnall, who co-writes the episode with Charlene James, reverting to his worst tendencies: overstuffing and overcomplicating a promising premise. “Can You Hear Me?” is about dreams, but’s also about mental illness, but it’s also about mythic figures tapping into our primal fears. In the end, the story is about none of these grand ideas and we’re left with a jumbled mess of an episode. 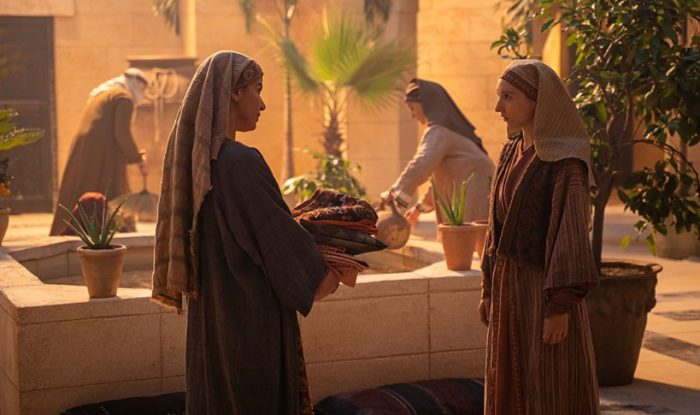 The episode starts off on a promising note, opening in Aleppo, Syria in 1380 with a spunky young woman Tahira (Aruhan Galieva) frantically insisting that the hospital, where she is being treated for her mental health, will be attacked by monsters that night. Though her warnings fall on deaf ears, she is proven right when her nurse is captured by the monster while Tahira cowers in fear — just in time for the Doctor to find her in the aftermath of the attack among the ransacked remains of the hospital, after having dropped off Team TARDIS back home. The Doctor is startled to find the monster lying in wait, but is even more disturbed to find that it doesn’t register with her sonic screwdriver. While she puzzles over this mystery, she is interrupted by calls from all three of her companions — from Yaz, who had seen a strange man appear in her living room after she had dozed off; from Ryan who had witnessed his friend get kidnapped by that same man; and Graham, who had received visions of burning planets and a woman with white hair begging for his help. The Doctor realizes all of these things are related, and brings Tahira along with the fam to locate the burning planets that Graham saw in his vision.

This isn’t the first time that Doctor Who has equated fears with dreams, but it’s the first time that it has attempted to interweave mental illness into a story involving those elements. Tahira is struggling with the loss of her family, while Ryan’s best friend Tibo (Buom Tihngang) had been slipping into a depressive state since Ryan stopped responding to his texts. But the episode’s treatment of mental health is clumsy, essentially boiling down to the resolutions of “overcome your fears!” and “talk to your friends!” It’s an overly simplistic approach that would have benefited from giving Tibo more screentime — the hints at his mental state with his messy apartment and dozens of locks are put on the backburner to introduce Tahira, whose own emotional issues aren’t addressed either. I was intrigued by the setting of the hospital in Aleppo, particularly its supposed “enlightened way of treating mental health,” because its a rarity to see any positive depiction of Syria onscreen, much less with such a rich production design, but it feels like a wasted location, with the Doctor only using it as her final battleground with the episode’s Big Bads.

‘Rumble’ Trailer: Wrestling Monsters Get Ready to — Well, You Know 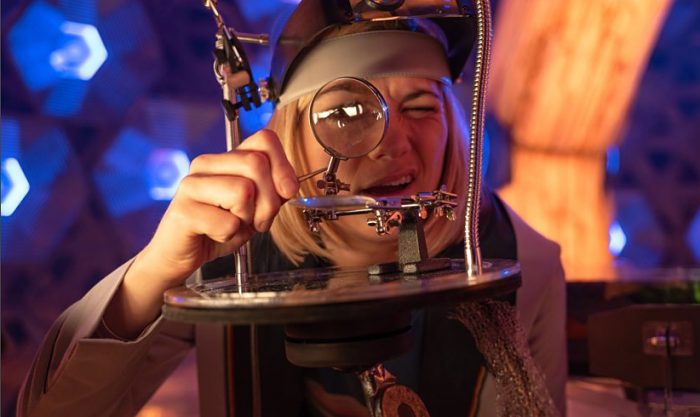 Can’t Put My Finger On It

The episode is quite intent on hiding its reveal of who the real Big Bads are underneath a monster that plays very little importance to the actual story. “Can You Hear Me?” layers mystery upon mystery in an incredibly scattershot narrative — is this a surreal dream episode? An subversive fable about mythic figures? Or a closed-space horror movie? The episode tries to be all three, and succeeds at none of them. There are elements of the dreamy Rubix Cube season 5 episode “Amy’s Choice” and even some of the mythic awe of “The Satan Pit,” thanks to a particularly stunning animated sequence that tells the story of two immortal gods who pit planets against each other in a game of fates. But the campy nature of the villains, who are revealed to be immortal nightmare gods Zellin (Ian Gelder) and Rakaya (Clare-Hope Ashitey), feels like the episode has been plucked straight out of a ’90s sci-fi series. That may be inevitable, considering the implied ties to Classic Doctor Who baddies the Eternals, the Guardians, and the Toymaker, but it doesn’t help the episode’s twisting, inconsistent tone and unimpressive impact, which puts it more along the low ranks of “Night Terrors” or “Fear Her.”

Zellin had been manipulating people’s dreams to feed to Rakaya, who had been imprisoned in an orb trapped between two colliding planets, and had lured the Doctor to the space station at the far reaches at the universe in order to free her. With the Doctor’s accidental help, Zellin and Rakaya escape, to wreak havoc on Earth’s inhabitants. Why Earth of all the supposed planets and alien races in the universe? Who knows? Grasping at a core message in this episode is impossible because of the story’s needlessly sprawling nature. It gets too wrapped up in its mysteries and secrets, up until the big reveal, that the central plot feels like a listless disappointment — especially when the gods’ reign of terror consists of them walking down a dark suburban street looking like X-Men rejects while wisps of CGI smoke float around them.

Duffy says horrific assault led her to withdraw from public

The episode’s saving grace is Team TARDIS, who find themselves trapped in dreams by Zellini and Rakaya. Ryan finds himself on an Earth on fire (in a nice nod to canon with the Dregs from “Orphan 55”) and his friend with white hair, a vision of abandoning his life for his travels. Graham dreams of Grace, who informs him that his cancer has returned. And Yaz dreams of her impulsive teenage self, who had run away from home and had only been saved by a kindly cop who had been called by her sister. The dream sequences are surreal and stunning, and effective at seeding some of the doubt that the companions are starting to have — Ryan of continuing to travel with the Doctor, Graham of his rrepressed fears about his sickness returning and his still-present grief over Grace, and Yaz, who wonders whether she is actually giving into her teenage impulse of running away from her life. The dreams are wonderful pieces of character building for the companions, who have never been better this season, but they feel at odds with the rest of the unfocused episode. 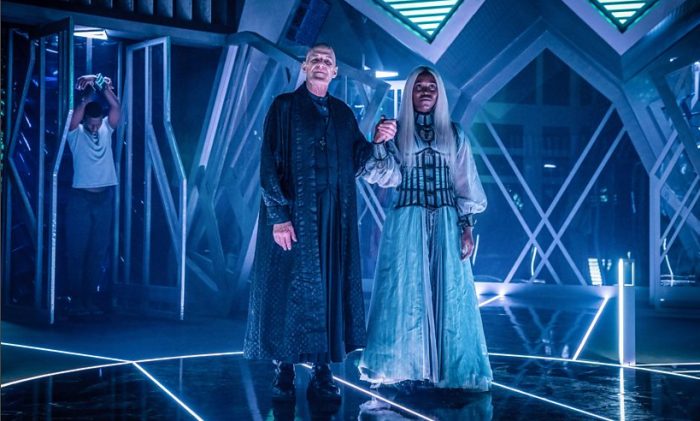 Who Are the Eternals?

Chibnall has taken a huge 180 since last season, where he was positively allergic to any references to the past, to this season, where his adoration of Classic Who canon may be his downfall. This episode has a lot of problems (an inconsistent tone, an unfocused narrative, a wasted historical location and character), but the major one lies in its villains, which are a big retro nod to characters first introduced in the era of Pete Davison.

Both Zellin and Rakaya are introduced as members of an immortal alien race called the Eternals, amoral god-like beings who have existed as far back as William Hartnell’s era, but were formally introduced in the 1983 serial “Enlightenment” with 5th Doctor Pete Davison. Per the Radio Times explainer, the Eternals manipulated mortals, who they disparagingly called “ephemerals” — which Rayaka makes a reference to in the episode, saying, “What do you think it feels like for them, to be such, tiny, ephemeral, flashes of existence?” The origins of the Eternals are not known, but they are said to live “outside of time, in the realm of eternity.” In their first Doctor Who appearance, they participated in a race through space arranged by the Guardians, another group of immortals that played a large part in the 4th Doctor Tom Baker’s era as well as Davison’s.

What does this all have to do with the episode? Well, Zellin mentions the Guardians by names and name-checks one pseudo-Guardian, “The Toymaker,” one of the oldest Big Bads who first appeared in a Hartnell-era serial, “The Celestial Toymaker.” All these clues, combined with the Doctor’s own dream that gives us a glimpse at the long-hinted “Timeless Child,” suggests that the season-long mystery may be related to the Eternals and the Guardians, and that this child herself may be one of those immortal beings. It’s all intriguing world-building stuff, but the episode suffers for it — Doctor Who is best when tapping into primal fears like this by making the monsters like something out of fables, not out of a campy ’90s sci-fi show. The easy way that the Doctor dispenses with Zellin and Rakaya too, by simply turning the nightmares back against them with Taheera’s ability to control the monster by “conquering her fear,” was anticlimactic. But this seems to be building to a finale that will tie in Classic Who canon, and perhaps bring about the beginning of the end of the current iteration of Team TARDIS. 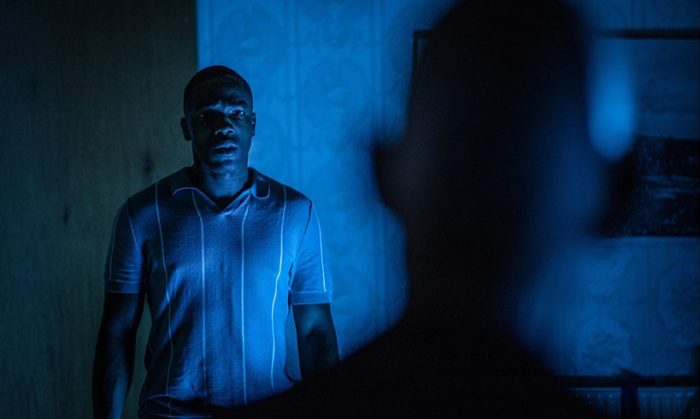 Tidbits in Time and Space

The post ‘Doctor Who’ is Dreaming of a Better Episode to Tackle Mental Health Than “Can You Hear Me?” appeared first on /Film.