Following Ridley Scott’s acclaimed sci-fi horror sensation Alien, director James Cameron had the difficult task of following it up and somehow raising the stakes and upping the ante. As we all know, he was successful with the simply titled Aliens, and the sequel brought an ample amount of incredible action thanks to an unit of US Colonial Marines trying to ascertain what happened to a space colony on the moon LV-426. Now you can recreate the battle against the nasty xenomorphs from the comfort of your home with a new Aliens pulse rifle prop replica from Sideshow Collectibles. 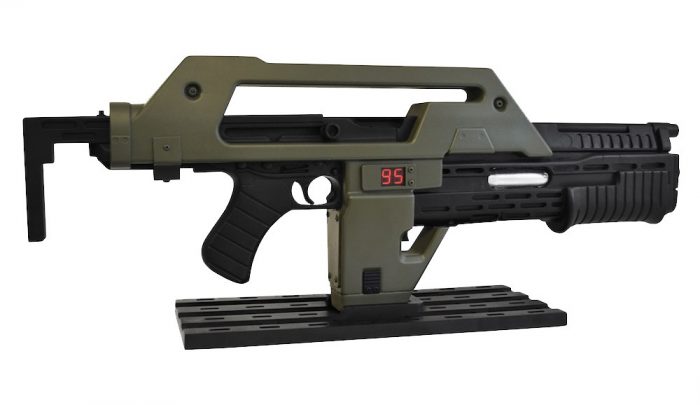 One of the most Iconic movie weapons ever to blast its way onto the big screen, the Pulse Rifle is the weapon of choice for the US Colonial Marines in James Cameron’s Oscar winning Aliens.

Several “Hero” Pulse Rifles were created, mainly for the live firing sequences, but most of the time what you see on screen are lightweight “stunt” versions – the hero versions weighing in at a hefty 20lbs or so!

To create the definitive Pulse Rifle we obtained one of the few surviving Hero Pulse Rifles, meticulously measured and photographed every detail and then painstakingly recreated this exactly. The result is the most accurate replica ever produced, a “must have” for any Aliens fan!

Our Stunt version Pulse Rifle remains faithful to the ones seen in the movie, with accurate shrouds the same dimensions as the “hero” versions, but has no moving parts and weighs only 5 ½ lbs – ideal for display or cosplay!

This prop weapon looks incredible, and it even comes with a themed tabletop display stand.

‘Jurassic World 3’ Might Bring Back Another ‘Jurassic Park’ Character

If you’re looking for another cool prop to give your US Colonial Marines cosplay another special touch, Sideshow Collectibles also has a M314 Motion Tracker prop replica you can still pick up over here.