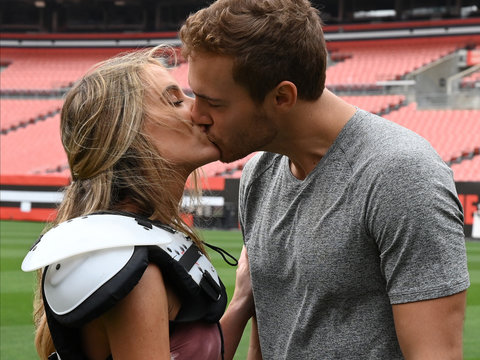 It is so early into this season of "The Bachelor" for it to be so messy already, and you have to wonder how much of this is producer manipulation. Certainly, musical guest Chase Rice seems to have heavily implied that his dirty laundry seeping into the show was more than just an unhappy coincidence.

And yet, Chase’s prior tryst with Victoria F was the least of the show’s chaotic drama this week. It wasn’t even the most interesting thing involving a Victoria. At least if former lovers were going to return, it wasn’t a "Bachelorette."

Why Country Singer Chase Rice Is ‘Pissed’ at The Bachelor Producers

In fact, despite Chase’s obvious frustration at being roped into the drama of the season when he just wanted to promote some of his new music, man, his involvement actually turned out to be a pretty subdued affair. It was all really simple and actually no big deal at all.

It turns out Chase had gone on a date — that got more than a little frisky — with Victoria F prior to the show. And so it was a little awkward when Chase stepped out to perform for Peter and Victoria. He then chatted with his ex (who didn’t want her to do the show), encouraging her to come clean to Peter.

She did, he didn’t care because, you know, he’s had sex in a windmill and life happens. So that was a total non-issue that we were led to believe was going to be a big issue. But maybe that was to throw us off the scent of the night’s real big issue … which was all about Victoria P.

This Victoria may or may not have lied about knowing ousted contestant Alayah from their days together on the beauty pageant circuit, but why lie about it? And then why get all weird when Peter asked if her if she lied about it?

This all came about because Alayah came back after a brutal football-themed date to "frickin’ set the record straight" about all the trash-talking that had been done about her, and specifically from Victoria P.

Let’s see some of what Victoria P said this week (it’s worth noting that she did not participate in the group date, instead spending one-on-one time with Peter and then after the game when the girls decided MVP Shiann should get to "steal" him first, Victoria P stole even more time, so she may well be that girl).

"You can believe that or you can believe me, but I’m telling you that my truth is the truth, and I have been so honest with you, and so vulnerable with you, and the most difficult parts of me, Peter." Uh, that’s a classic misdirect, trying to change the subject from honesty to vulnerability.

"Like I gave you my whole heart, every bit of it, and…I’m frustrated." What does that have to do with honesty?

Farrah Abraham ‘Scared’ to Use Vagina After Rejuvenation (Exclusive)

We love that Peter came back with, "I’m not talking about that." Maybe he should be a debate moderator!

Victoria’s final way to convince Peter she’s being truthful? "I don’t know what story you’re hearing. All I know is that there’s so much I want to share with you." Maybe she should go into politics because that is again nothing to do with honesty or even the story he’s hearing.

It didn’t get much better when Peter pushed the issue by having Alayah and Victoria P (who was trash-talking Alayah behind her back but loving her to her face). It got ugly and awkward, and then the girls collectively got pissed when Peter gave a rose to Alayah, welcoming her back into the fold.

They think it was all unfair because she didn’t even get bruised playing football, but he thinks it was totally fair because he only let her go because they convinced him not to, so this is him correcting what he sees as a mistake last week.

But then Alayah went and took advantage of her time at home between shows to reveal that she totally knew about Victoria F and Chase Rice and she got a little ugly about that and maybe all of these women are horrible.

But there’s hope. Some of these women are so much window dressing at this point. Maybe they’ll emerge as likable and exciting people in future episodes after some more of these trainwrecks go home. No one did this week, but next week brings two new episodes, and some thinning with it.

For now, Bachelor Nation had plenty to get excited about this week (way more excited than these girls were to go to Cleveland!):

Heartbreaking Reason Kobe Bryant Insisted on Flying in Helicopters, In His Own Words

All of the girls in the house to Peter right now….#TheBachelor pic.twitter.com/5eEIceYFMT

Did the women on #TheBachelor just unionize and demand better conditions?

Peter: “I feel like I’m doing this all wrong”
Bachelor Nation: #TheBachelor pic.twitter.com/oaUyDqluOo

You know who would NEVER have given us a season of pointless drama… #TheBachelor pic.twitter.com/i3Cs4l8V7S

this is the “i should’ve left w hannah b when i had the chance” face #thebachelor pic.twitter.com/5BuqSPSDeN

You know who would stick with their decisions and not bring back someone they sent home already? This guy. #TheBachelor pic.twitter.com/G2SbVwEBoA

Peter: You know I feel good going into tonight… this has been a really good week for me … I have 100% full confidence that I know what I’m d—
All of the women, immediately:#TheBachelor pic.twitter.com/s1U8lW5Vec

WAS PETER READY BE THE BACHELOR? #TheBachelor pic.twitter.com/lGMOZhrGl5

"The Bachelor" continues with five hours next week. First up, a three-hour follow-up to this mess on Monday at 8 p.m. ET, followed by a standard two-hour episode on Wednesday at 8 p.m. ET on ABC._

‘Brahms: The Boy 2’ Clip Reminds You to Not Let Your Kids Play With Creepy Dolls