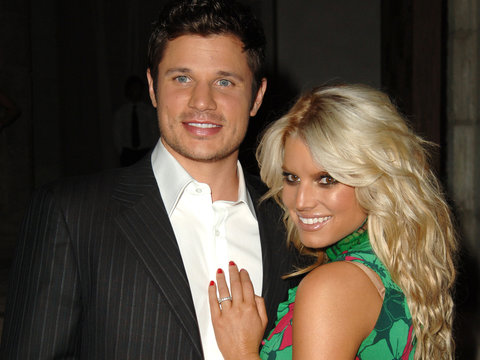 Nick Lachey and Jessica Simpson’s marriage provided some incredible entertainment for anyone watching "Newlyweds," but behind the scenes, there was a lot more going on than Chicken of the Sea confusion.

With her new tell-all, "Open Book," dropping in early February, People just released even more excerpts from the memoir — and these ones are totally focused on her relationship with her ex husband.

The two met at a Christmas Party in 1998 and got engaged in 2002. In the book, she calls Nick her "first love" and says he was attracted to "the fact I was so strong in my faith and that I had this wide-eyed innocent approach to life."

That "wide-eyed innocent approach to life" was partly due to the fact she was only 18 when they met and the two shared an 8-year age gap.

"I respect Nick very much. I was really young and my success hadn’t really begun. He knew me as this young innocent 18-year-old that had never been introduced to the world in so many ways," she writes. "I went straight from my father to him. Nick’s very smart. He was eight years older than me, but he was also young."

Saying that she "didn’t know myself" at the time they were together, things cooled when the cameras weren’t on them.

"We were young and pioneering our way through reality television, always miced and always on,," she explains. "We worked and we were great at it but when it came time to being alone, we weren’t great at it anymore."

‘A Quiet Place Part 2’ TV Spot and Featurette Both Want You to Keep Your Voice Down, Please

"We really got crushed by the media and by ourselves," she added. "I couldn’t lie to our fans and I couldn’t give somebody hope that we were this perfect golden couple."

She asked for a divorce in 2005, saying that at the time they "were not even speaking to each other."

While it didn’t work out in the end, Simpson said the two "meant a lot to each other and we always will." She also didn’t want to slam him too much in her book, saying, "I want to be very respectful because I married him for a reason and we were together for seven years for a reason."

She added, "He has a family now and I would never say anything to disrespect that."

Lachey is married to Vanessa Minnillo, with whom he shares three children. Simpson later married Eric Johnson and has three kids with him as well.