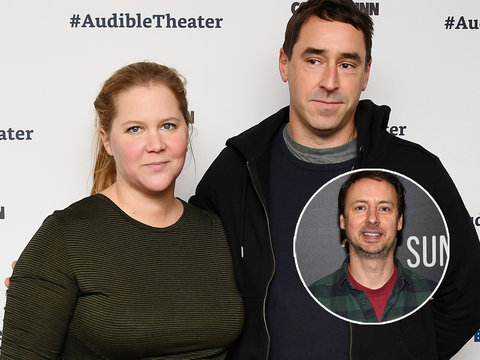 Amy Schumer must be one of those cool exes.

During the latest episode of "The Howard Stern Show," comedian Kyle Dunnigan revealed he is currently living with the actress — whom he previously dated — and her husband Chris Fisher. Oh, and their eight-month-old son Gene.

"I’ve been there for a month and a half," Kyle explained, noting he made himself a little too comfortable at first. "I got so entitled, like the first two days. Like the soap was low and I was like ‘Why is the soap low,’ so I had to check myself."

A bemused Howard asked, "And she’s not pissed off, like you’re not leaving?"

"No, she’s been very cool," Kyle said, before explaining he was crashing there while helping to write her new show "Love, Beth" for Hulu.

He said he has his own room and a "marble" bathroom.

As to whether he avoids Schumer’s husband — who married the "Trainwreck" star in 2018 — in case it’s too awkward, Kyle said they rather enjoy each other’s company "playing chess" and finding time to "bro out."

Plus, "all the food is really good and free," he quipped. "I’m supposed to leave in three weeks, but I don’t think I’m gonna."

But Kyle did admit he should be looking for his own pad soon. "I’ve gotta get outta there, ’cause this is suspended adolescence."

Kyle — who says he dated Amy "a while ago and it was brief" — collaborated with the mother-of-one on her Comedy Central sketch show "Inside Amy Schumer," which won him an Emmy in 2015 for the parody song "Girl You Don’t Need Makeup."

Watch Kyle spill all the details on his living arrangement above!