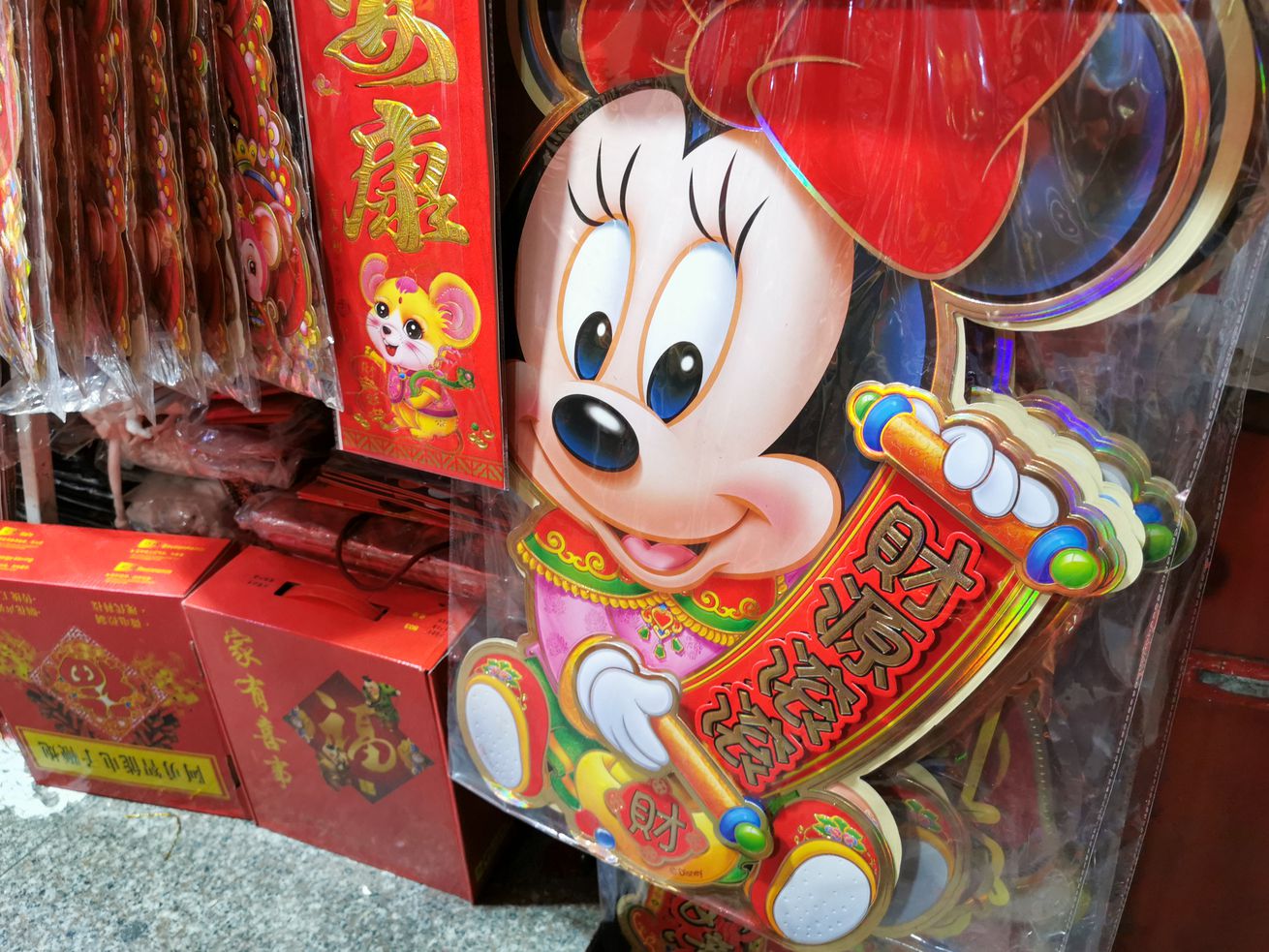 Gucci, Nike, and Sephora have released new merchandise for the Year of the Rat.

The stretch of time between end-of-year celebrations and Valentine’s Day is usually bleak. People are physically and financially drained from the holidays, and there’s not much to celebrate — a dry spell that has led brands to create a deluge of fake holidays like National Shortbread Day (January 6) and National Shop for Travel Day (January 14).

Within the past decade, a spate of brands both luxury and affordable have adopted a new holiday into their calendars, one that’s already celebrated by more than a billion people annually: Lunar New Year. In the US, the holiday is generally referred to as Chinese New Year, but Lunar New Year seems like a more accurate description, given that the event is also observed by non-Chinese people.

What is Lunar New Year?

While Lunar New Year 2020 officially falls on January 25, the holiday is celebrated across multiple days and even weeks in places like China, Hong Kong, Singapore, South Korea, Taiwan, and Vietnam. Under the Gregorian calendar used by most countries worldwide, the new year starts on January 1. Lunar New Year is the celebration under the lunisolar calendar — which is based on cycles of the moon — and typically falls on the second new moon after the winter solstice.

The specific celebrations and formal dates encompassing the holiday vary by country and culture, but it’s an important day reserved for festivities to ring in the new year. Celebrants host elaborate meals with extended families, exchange money or gifts for good fortune, party in the streets, and set off fireworks. Lunar New Year in China, which is called the Spring Festival, has 15 days of festivities, South Korea’s Seollal celebration lasts 12 days, and Vietnam’s Tết Nguyên Đán is a week long.

There are numerous other lunar calendar-based celebrations that fall later than January 25, usually during or after the spring equinox. For example, Losar, the Tibetan new year, begins on February 24, while Cambodia starts its new year celebration on April 14.

It’s likely that the growth of Asian immigrant populations in the US, especially those of Chinese, Korean, or Vietnamese descent, has contributed to the overall popularity and cultural awareness of Lunar New Year. The largest celebrations from these communities typically occur in urban centers like Los Angeles, New York City, or San Francisco.

Why Japan, in the face of the climate crisis, is building more coal plants

Lunar New Year is a holiday steeped in tradition. It’s also an occasion to spend.

As with most holidays, Lunar New Year has become an opportunity for retailers to sell shoes, jackets, or handbags on the premise of being culturally observant. While there are various other lunar-based celebrations in the months that follow, Western companies have notably latched onto Lunar New Year, given the scale of its celebration.

Well-known Western brands like Apple, Gucci, Nike, and Sephora have launched new advertising campaigns and capsule collections overseas, primarily aimed at Chinese customers, but these activities have also bled into the American market. Malls, shopping centers, and entertainment venues in major US cities are hosting attractions tied to Lunar New Year. Despite the financial gains made from it, however, Lunar New Year is not yet a federal holiday.

The commodification of major holidays and events is nothing new. Brands have long had a corporate incentive to pander to customers by aligning themselves with certain political and social goals. Yet there’s a stark disconnect that emerges when brands try to commercialize a holiday, especially one tied to cultures that celebrate it abroad like Lunar New Year.

Despite the financial gains made from it, however, Lunar New Year is not yet a federal holiday

“There’s this flattening of the world taking place in regards to marketing trends and themes,” Deb Gabor, a brands expert and CEO of Sol Marketing, told Vox. “It mostly started with the luxury brands, but we’re seeing more and more mainstream brands doing this,” like Sephora and online beauty companies.

Lunar New Year appears to be yet another branded holiday where products are marketed with culturally specific colors, themes, and motifs — with the intention of courting an Asian market that holds significant spending power. Brands, especially luxury retailers, are actively chasing China, which will be the world’s largest apparel market by 2030. The “Lunar New Year effect,” as Gabor called it, is reflected in how American retailers are participating in Chinese shopping events, like Singles Day.

According to China’s Ministry of Commerce, Chinese consumers in 2019 spent $149 billion across the week-long Chinese New Year holiday. China is also a hot spot for luxury retailers, spending about $7 billion each year on brand-name goods, according to McKinsey.

Every year, retailers have the opportunity to create new merchandise that correlates with the 12 animals of the Chinese zodiac, which symbolizes a given year. A person’s zodiac sign depends on their birth year, and even American consumers have a semblance of knowledge of the zodiac, if not their affiliated animal. Given our collective enthusiasm at identifying ourselves through unscientific, ambiguous ways, brands are relying on zodiac imagery to sell their products.

sees what you’re up to Apple. Alot of the emoji engraving options also match the Chinese Zodiac animals so you can engrave the year of your birth. pic.twitter.com/kxvM21ltfw

2020 is the Year of the Rat, which might not be the cutest animal on earth, but that hasn’t stopped fashion retailers and makeup brands from releasing rat-related merchandise: Gucci and Adidas Originals have both partnered with Disney on capsule collections that feature Mickey Mouse, arguably the most famous rodent in the world.

Evil stepmother jailed for savagely beating up stepson, 6, leaving him with black eyes and horrible injuries

Rag & Bone has a pizza rat sweater, and Moschino released products with its Mickey Rat logo (which looks like Mickey Mouse but with a long jagged snout). Other retailers have opted to use more traditional motifs, like Nike, which has a series of subtly intricate shoe designs inspired by traditional Chinese paper cutting.

Despite their best efforts, Western companies haven’t escaped the inevitable criticism (mostly by Western consumers) that they’re commodifying a cultural holiday for their bottom line. In addition to Lunar New Year, brands have also capitalized on China’s Mid-Autumn Festival and the Muslim holiday Ramadan.

In a 2015 piece for Racked, Fareeha Molvi wrote about the slow commercialization of Ramadan, and about grappling with how her culture “could be the next lucrative frontier,” like other holidays before it. “At its core, Ramadan is about doing more with less. Literally, you’re asked to do more good deeds while physically consuming less,” she wrote.

When companies try to co-opt a cultural holiday for material gain, they risk subverting or even trivializing the tradition behind the event. Despite Lunar New Year’s deep-seated traditions, it has devolved into somewhat of a consumerist holiday: It’s tradition for people to buy loved ones gifts or exchange money (which encourages spending), and it’s even considered good fortune to ring in the new year with new stuff.

For the most part, Asian consumers abroad don’t appear to take issue with the cultural marketing. Nike and Apple have received praise for releasing poignant ads that focus on family and tradition. However, foreign customers are quick to notice failed marketing ploys and point out where brands have erred. For example, Burberry’s Chinese New Year campaign in 2019 featured stoic, heavily stylized family portraits, which Chinese netizens found creepy and tone-deaf.

Amid tensions between China and the US over trade and geopolitics, however, Chinese shoppers might not be as receptive to Western brands’ Lunar New Year efforts. They’ve become especially wary of American companies and critical of international retailers overall, according to a Wall Street Journal piece on how America is losing the Chinese customer.

“This past Christmas is a good indication that [retailers] don’t have much up their sleeves besides promotions and discounts,” Gabor said. In a way, Lunar New Year has been a saving grace for some retailers, another opportunity to get more customers to buy.

That might change in the future, as surveys show how Chinese shoppers prefer to buy from domestic brands, partly for patriotism’s sake. On Singles Day, the country’s largest shopping holiday, up to 78 percent of respondents surveyed said the trade war would affect their purchase of American brands. It doesn’t help that a string of missteps in 2019, which left companies scrambling to scrap together corporate apologies, has soured China’s perception towards Western brands.

It was just in 2018 that a Chinese fast-fashion company had to set up shop in London to gain appeal in Beijing. The opposite effect might be taking place now. Analysts predict that Chinese shoppers alone are expected to spend as much as $156 billion on new year festivities. Still, it’s uncertain whether it’ll benefit the bottom line of Western companies.

Sign up for The Goods newsletter. Twice a week, we’ll send you the best Goods stories exploring what we buy, why we buy it, and why it matters.