Apple TV+ presented panels on the last day of the Television Critics Association winter press tour. The streamer finally announced premiere date for the long-awaited reboot of Steven Spielberg’s anthology series Amazing Stories. The revival of the series has been one of the cornerstones of Apple’s originals slate, but this is the first word we’ve gotten on when the show will arrive, and it also came with an Amazing Stories first look photo.

Amazing Stories will premiere Friday, March 6 with the first five episodes, including “The Rift” for which Apple released a new image, which you can see below. Mark Mylod directs “The Rift” starring Kerry Bishe, Whitney Coleman, Trisha Mashburn, Austin Stowell, Ed Burns and Juliana Canfield. 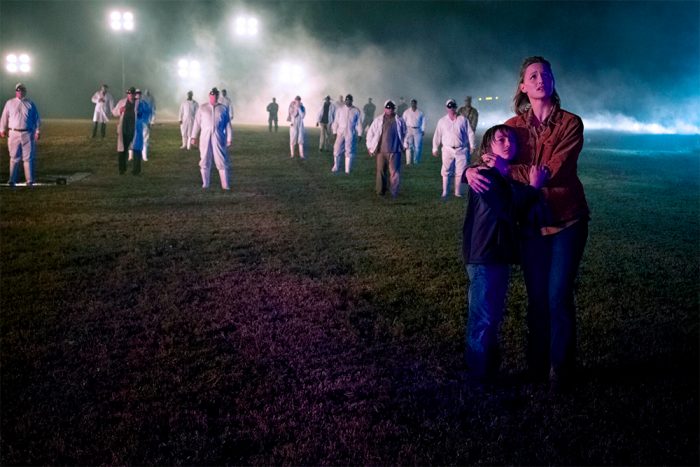 We see Bishe standing with a young boy, likely her character’s son, standing in a field full of men in white suits and visors. They’re all looking up at the sky, giving us Spielberg vibes akin to E.T. The Extra Terrestrial and Close Encounters of the Third Kid. Unfortunately, Apple did not provide a synopsis of the episode, so we’re left wondering what they’re gazing at.

Steven Spielberg’s Amazing Stories lasted two seasons from 1985-1987 and had memorable episodes like Santa Claus getting arrested and a teenager getting magnetized by a meteor. Each episode was a standalone half-hour story, like Twilight Zone, but the twists usually had a more hopeful message and resolution than Rod Serling’s dark twists.

Other Amazing Stories stars include Dylan O’Brien, Victoria Pedretti, Josh Holloway, Sasha Alexander and what will be the final performance given by the late Robert Forster. Directors include Chris Long, Michael Dinner, Susanna Fogel and Sylvain White.

Amazing Stories has quite the legacy to live up to since it features stories directed by the likes of Joe Dante, Martin Scorsese, Clint Eastwood, Irvin Kirshner, Robert Zemeckis, Brad Bird, Tobe Hooper, and Spielberg himself. But there must be something good happening behind the scenes since Apple announced they’re renewing the series for another season already. So tune in this spring and see some new amazing stories.