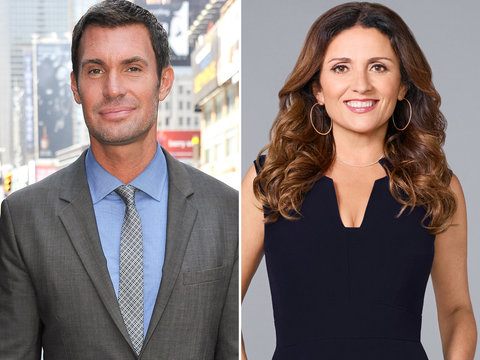 Jeff Lewis rang in the new year with a fresh perspective on things, particularly his fallout with once-best friend and "Flipping Out" co-star Jenni Pulos.

The loose-lipped interior designer just announced on his SiriusXM radio show that he extended an apology via text to the woman he likened to a sister, hoping they could start to mend their relationship for the sake of their "long, long" history together.

And it was actually a fellow Bravo star who inspired his attempted reconciliation.

"I’m gonna start off the show by letting everyone know that about a week ago, I had lunch with ["Shahs of Sunset" star] Mercedes Javid and Heather McDonald," Lewis began Monday’s episode of "Jeff Lewis Live," noting they stopped for coffee after their meal at Katsuya.

"So during the Starbucks conversation, Jenni Pulos came up," he explained. "And Mercedes was saying, ‘Look, you guys were friends forever. Ups, downs, she’s like family to you. Are you ever gonna reach out?’ I said, ‘Well, actually, I’ve thought about it for months, reaching out.’ I think I’m a good apologizer only because I wait ’til I’m actually really sorry. Do you know what I’m saying? If you’re forcing me to apologize right now for something that I just don’t feel like I should apologize for, I’m not gonna be a very good apologizer."

"Sometimes, it takes me weeks, months, a year to really reflect and realize what my role was in something. And I felt like it took many, many months," he went on. "And I think maybe it’s because we had such a deep, loving relationship, Jenni and I, that there was a lot of hurt. And I think it took me a very, very long time to really take a look: ‘Okay, what did you do, Jeff? Why did she react this way? What did I say?’"

See Also :  This Week In Trailers: Jasper Mall, Wake Up, DAVE, Run This Town, The Pharmacist

Pulling out his phone, Lewis read aloud the text he sent Pulos on Sunday: "I wrote, ‘Hi, Happy New Year. I hope you and your family are happy and healthy.’ I did this yesterday, by the way. ‘Would you be open to meeting with me some time? I don’t feel good about what happened between us, and I’m very sorry for my role in it. Jeff.’"

"I’m hoping that she gets back to me," he said. "I would love to sit down and talk to her. Now, I don’t expect anything in return from her. So I plan on clearing my conscience and telling her everything that I’m sorry for, but I’m not gonna do it and be like, ‘Okay, well what are you sorry for?’ You know what I mean? That should happen in her own time — or not!"

Reiterating that he had "no expectations" attached to his apology, Lewis said he wanted at the very least to have a cordial and polite relationship with Pulos, especially because they run the risk of running into one another.

The fight that ended their pair’s long-time friendship actually took place in early 2018. During the Season 11 finale of "Flipping Out," Lewis fired Pulos from Jeff Lewis Design, then claimed she filed a complaint about workplace abuse. Pulos insisted she never did.

He’s gone on to speak about their strained relationship on both "Jeff Lewis Live" and "Watch What Happens Live with Andy Cohen," while Pulos has remained relatively silent.