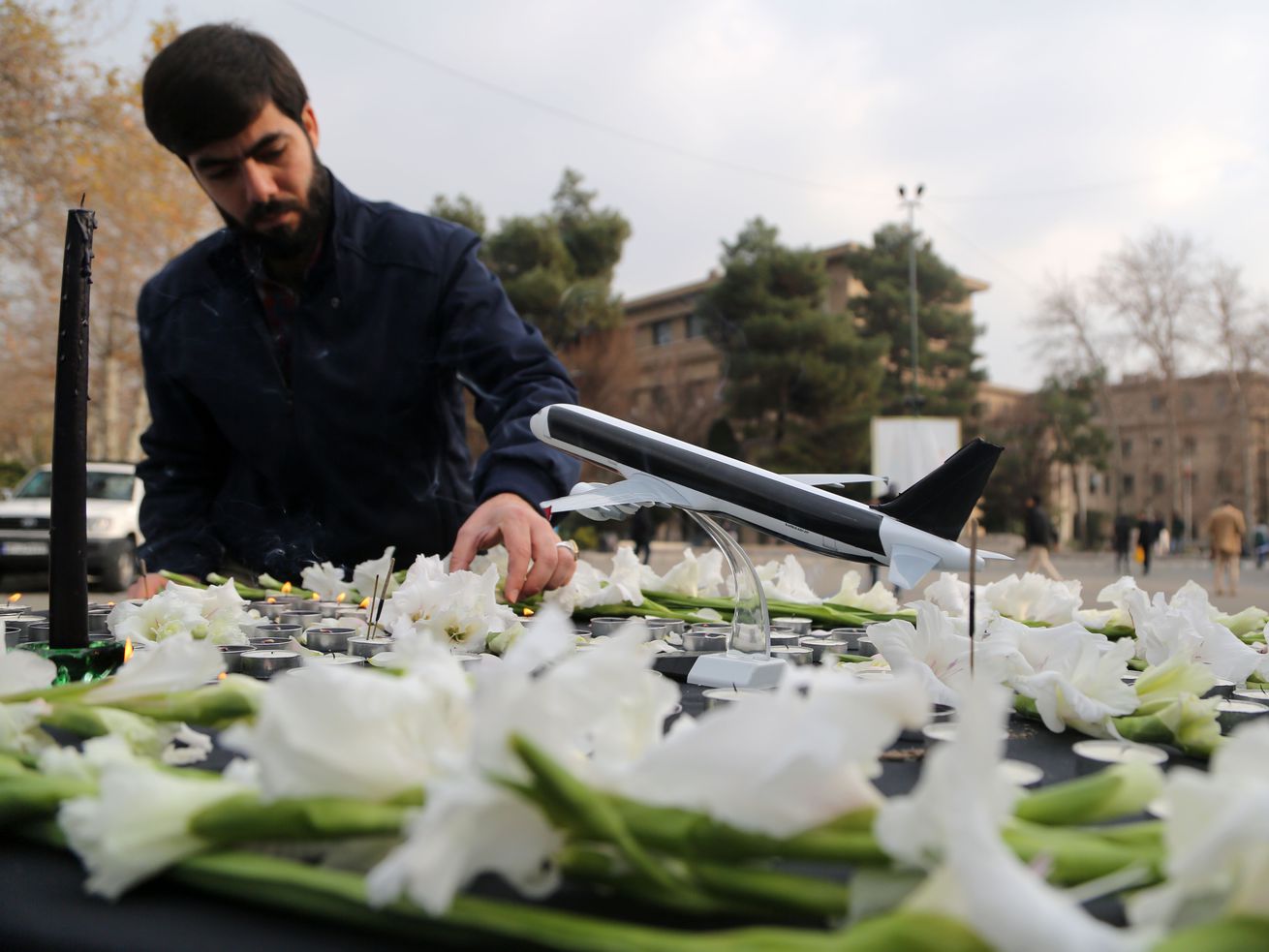 Iranians attend a vigil for Qassem Soleimani and the victims of the Ukrainian airplane crash near Imam Khomeini Airport. | Anadolu Agency via Getty Images

Iranian President Hassan Rouhani: “It was the US that caused such an incident to take place.”

Days after admitting it accidentally shot down a Ukrainian passenger plane carrying 176 civilians, Iran has announced that those responsible have been arrested.

It is not yet clear how many were arrested or who they are; they may be members of the Islamic Revolutionary Guard Corps’ airspace unit. Following Iran’s admission of guilt for downing Ukraine International Airlines Flight 752, the head of that unit, Gen. Amir Ali Hajizadeh, said, “If there was a mistake, it was made by one of our members.”

In a televised speech on Saturday, Hajizadeh said, “I accept all responsibility for this incident,” and told the Iranian people that whatever punishment courts or authorities decide he should face, “I will accept with arms open.”

Iranian President Hassan Rouhani suggested Tuesday that the government has rejected Hajizadeh’s offer to bear the weight of the tragic error alone. “The responsibility falls on more than just one person,” Rouhani said, adding that those found guilty of wrongdoing “should be punished.”

Unlike Hajizadeh, or IRGC commander Hossein Salami — who told Iran’s Parliament Sunday, “I swear to almighty God that I wished I were in that plane and had crashed with them and had burned” — Rouhani did not say whether he feels he is at all to blame for the civilian deaths.

The president did, however, say he wants to “form a special court with a ranking judge and dozens of experts,” because “this is not an ordinary case. The entire world will be watching this court.”

Iran shot down the plane early last Wednesday, following an attack on US positions in Iraq that was launched to retaliate for the US’s assassination of Quds Force leader Maj. Gen. Qassem Soleimani. The strike on US forces was reportedly carefully managed to avoid casualties in an effort to limit further escalation of conflict in Iranian-American relations. However, in the hours after that attack, Iran mistook flight 752, destined for Kyiv, for a military plane, Iranian officials said, after it “took the flying posture and altitude of an enemy target.” All 176 people on board — including 82 Iranians, at least 63 Canadians, and 11 Ukrainians — were killed.

Iran originally claimed the crash was caused by a technical failure rather than military action, and said US and Canadian claims otherwise were “lies.”

However, by Saturday morning Iranian officials said the act was the result of “human error,” and Rouhani apologized in a statement on Twitter, writing, “The Islamic Republic of Iran deeply regrets this disastrous mistake. My thoughts and prayers go to all the mourning families. I offer my sincerest condolences.”

Amid anger over the civilian deaths, Iran blames the US for the crash

Despite these apologies, the admission of fault led to new anti-government protests, which were encouraged by the US government. It isn’t clear how large or widespread the protests were; the semi-official Iranian news agency Fars reported that at least 1,000 people protested Saturday. On social media, some users reported violent crackdowns by Iranian security forces Sunday.

See Also :  Venezuela’s opposition leader failed to depose Maduro. He explains why he’s not giving up.

The protests also have led to increased tensions between the UK and Iran, as Vox’s Jen Kirby has reported, due to a British ambassador being arrested at the site of a protest at a university in Tehran Saturday. That ambassador, Rob Macaire, said he’d come to attend the vigil for the dead that the protest began as.

2/2
Detained half an hour after leaving the area. Arresting diplomats is of course illegal, in all countries. See comments by Foreign Secretary @DominicRaab. https://t.co/djpr99iSwI

Macaire was released and Iran apologized, but a number of others who were arrested remain jailed; Tuesday, Iranian officials said 30 people in total had been arrested over the weekend, and that only some had been freed.

In the wake of unrest, Iranian officials have begun to argue that although the country’s military shot down the plane, and although they chose not to close Tehran’s airport, it is the US that is to blame for the civilians’ deaths because all Iranian military action the night of the crash was in response to US aggression.

The US has maintained its killing of Soleimani was justified. But Iranian officials argue that even before the killing, the heightened tensions after the US pulled out of the Iranian nuclear deal created a dangerous atmosphere that made deadly accidents possible.

Even as Salami told his fellow Iranians that he wished it was he who’d died in the crash, he reminded them, “We were at war with America and we still are. We are soldiers of this nation and devotees of this people. “

See Also :  Incredible moment freediver gets up close and personal with huge humpback whales — and even MIRRORS them