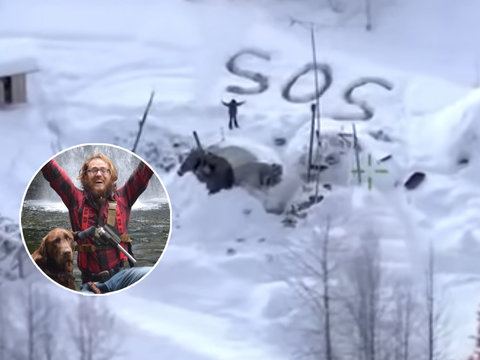 A 30-year-old man who survived three weeks in the Alaskan wilderness has described his ordeal.

State troopers posted a video of the moment helicopter rescue crews spotted Tyson Steele on Thursday, next to the giant ‘SOS’ message he had stamped in the snow.

In a scarcely-believable account, Steele explained the ‘huge mistake’ that had burned down his cabin, as well as how he managed to stay alive in temperatures that dropped to minus 40, after virtually every one of his belongings had gone up in smoke.

Leonardo DiCaprio Proves You Don’t Even Need A Floating Door To Help Someone, Rose

He also described how his only companion at the remote mountain homestead, his chocolate Labrador named Phil, died in the fire.

"It started with a pretty hasty mistake," he explained. "The mistake I made, I got hasty and I put a big piece of cardboard in the stove to start the fire. Which I knew was a problem, I’ve had wood stoves all my life. I knew that you don’t do that. So, it sent a spark out through the chimney which landed on the roof."

Steele said he had purchased the Quonset hut — situated 20 miles from his nearest neighbor — from a Vietnam vet who had "built it out of just one-bys and tarps."

He described the night everything went wrong (December 17 or 18, he wasn’t sure which as he wasn’t keeping very close track), when he was woken up at 1AM or 2AM to freezing cold, and fiery drips of molten plastic dripping down from above.

"So, I go outside to pick up some… snow and I just see that the whole roof’s on fire," he recalled.

He was wearing boots with no socks, long johns and a wool sweater, and that’s it.

"It goes up into flames faster than, like, I can even imagine. It just, like, from the point of going back and seeing the roof on fire, going back in, like, smoke everywhere," he said. "There’s this image that keeps coming back in my mind of a swirling flame coming sideways for my face."

Choking up, he then described the worst moment of the whole ordeal: "My dog was in there, asleep by my side. Day after day for the last six years he, he’s six years old… Best dog in the world. So, so happy. I just can’t even describe."

"He was so scared of the fire and in my thinking I’ve gotta grab Phil and I’ve gotta grab some stuff to sleep in so I basically… I grabbed everything that was on my bed."

Knowing the next split second decisions he made would determine whether or not he even survived until morning, he ran back into the burning building and managed to grab anything that was on his bed: the blankets, some coats and sleeping bags.

His next thought is to grab his rifle around the other side of the cabin, and as he does Phil starts howling — but from inside the burning building.

"And I thought he was not inside. And that’s when there was… I was hysterical. Right? I had no logic. Nothing. I have no words for what sorrow; it was just, just a scream. Just a visceral – not angry, not sad, just, like, that’s all I could express – just scream. Felt like I tore my lung out."

Any thoughts of going back in to save him were literally shot down when he realized all his ammo was all inside the fire too.

"The bullets were in an ammo box exploding," he recalled. "Pow, pow, pow, pow, pow! It was like a war zone. It was just 500 rounds going off all at once. I don’t know if I can even approach the cabin to put it out. There’s 500 rounds of ammunition going off!"

His next thought was with his two-year food supply — but it is stored next to the exploding ammo, and the propane tank that exploded next.

"So, there’s explosions going everywhere. The fire is just a huge, massive grease fire," he said. "Every shovel of snow that I throw on it – I’m hysterical trying to put it out and it’s not doing anything. And I worked up into the morning, into the light trying to put out various sections of the fire."

After losing almost everything to the fire, by the morning Steele realized he needed to keep some of it going for heat (to give an idea of how cold it was, he described how the bucket he peed in would freeze within minutes just feet from the stove).

His first task was to do an inventory: he salvaged 60 cans, which he knew he could survive on for 30 days by rationing two a day. Some of them had popped open in the heat and tasted of burnt cabin; others, such as his plastic jars of peanut butter, had melted into the contents — these he kept til very last.

He built himself a snow cave to sleep in for the first few nights, before building a makeshift shelter around the still burning stove from leftover tarp and scrap timber.

He also wrote out his SOS message in the snow using charcoal — having to redo it every time it snowed — knowing that air traffic overhead was minimal.

He knew his best shot at being rescued was friends or family becoming worried at the lack of contact; unfortunately, because of his "crappy phone" his parents had gotten used to him not checking in.

Before arriving in September he had bought a brand new phone, but didn’t realize it had charging issues until he got there.

"It made me break another rule that I’d established for years, and that was to be strict on my communication weekly – call my parents and let them know I’m good," he lamented. "But, because it was just crappy, I maybe would not do it on the weekend. I would do it a few days after. I’d call up and they’d say yeah, we were a little worried, and I’d say it’s this crappy phone."

He decided that if he hadn’t been rescued by day 35, he would attempt to trek the 20 miles to Skwentna. But with some days snowing three feet of fresh powder and both pairs of snow shoes now ash, he knew it was a long shot.

And if his loved ones did send the charter flight to pick him up, it was up to him to make sure the frozen lake it lands on was thick enough to bear it.

"I didn’t have a map and I knew I didn’t have enough knowledge of the whereabouts. I could have said oh, [let’s go] that direction. But I have no idea what waterways stay frozen enough for me to walk through – I could fall through the ice. They bend around so much I could lose my direction," he said in his incredible report.

"I only have six hours of [daylight] travel. I had a headlamp for maybe 10 or 11 days, but I only had the batteries that were in there. So, I ran out of light."

Luckily for Steele, he never had to make the trek; Alaskan State Troopers were asked to perform a welfare check and on January 9, approximately 23 days after the fire, the helicopter rescue crew spotted him alive and well beside the ruin of his cabin and his SOS message.