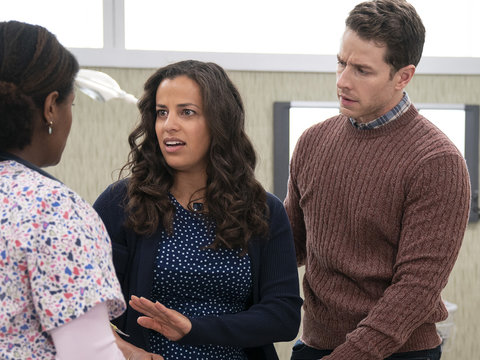 Things are evolving on "Manifest" in a hurry, and these Callings seem to be taking on a life of their own, and possibly another as well.

While we’ve got plenty of questions after this latest episode about the continuing changes in these Callings, as well as the new Captain at Michaela’s precincts, and what the hell is going on with Grace, there’s one development we have no questions about … but plenty of concern.

Olive is a character who’s kind of been unmoored by everything happening around her, and the shocking twist revealed in this episode (we’ll get to in a minute) has left her feeling more adrift than ever. Honestly, it’s a bit hackneyed of a reason to drive her to Adrian’s Church of the Believers, but the writers needed a way to rope him back in.

By the time she musters up the nerve to actually attend one of his services, we can see that he’s really upgraded from when Ben first found him in a rundown storefront. So is Adrian the real deal, or is he a shyster taking advantage of people who see something spiritual in what happened to Flight 828? And what will happen now that he has a Stone under his roof?

We’ve had an icky feeling about him since the beginning, so while we don’t have any questions yet about what Olive is sure to find there, we have a huge sense of foreboding about her stepping foot into that church. And not just for her, as he seems to be gaining followers and influence and (apparently) funding at a rapid pace … just like the Major.

Another arena that doesn’t offer much to poke at just yet is Vance’s revelation that the Major doubled her financial pool in the last week. The only change we’ve noticed in that span is the growing intensity of the Callings, and this bizarre Flight 828 crashing Calling that Cal and Michaela and Zeke are sharing for some reason.

And that does get us to some of our burning questions:

What is the Connection Between Michaela, Cal and Zeke?

So far this season we’ve seen this shared calling that Cal and Michaela are having with Zeke, but we also learned that they aren’t exactly sharing it completely. Rather it appears to be a combined Calling that isn’t quite connected until the episode’s closing minutes. Cal and Michaela are in their seats as the plane is crashing, but Zeke is standing.

For one, he was never on the plane. For two, he’d never be standing in a turbulence situation like that, so more than likely his Calling has him somewhere else (we don’t get his POV on this). So the question is why are they sharing this Calling and why have the three of them been so connected throughout this show’s run.

Granted, Cal seems to share a connection between lots of passengers, and Michaela and Zeke have been connected since Zeke first stumbled into that cabin, but what is it in particular about this trio that is so important? And while we’re at it, what is this Calling about? The plane never crashed … unless it did … and Zeke had nothing to do with it.

Why are Callings Intensifying Physically?

The Callings have been dangerous before, with Cal almost dying last season due to his stronger connections with them. Now, though, it’s not just him having strong physical reactions. The plan Callings this week had Cal, Michaela and Zeke all visibly shaking here in the real world even as they were having this intense plane crash vision.

Are the Callings intensifying in general, or just this one in particular? Perhaps it’s indicative of something getting closer or the passengers getting stronger with whatever abilities Flight 828 gave them. If the Callings are from an ouside source, is that source closer? Or perhaps they’re closer to some fixed time that’s important. "Death Dates" perhaps?

Why Did Zeke Plead Guilty?

Speaking of "death dates," Zeke’s is coming up first out of all the returnees, so what exactly is he doing pleading guilty to everything and throwing himself in prison rather than fight for his freedom? In what way does he think this is going to help Michaela or anyone figure out what’s going on. Does he know about his "death date" now?

It’s possible there is nothing more to this than what it appears on the surface; Zeke feels guilty for the screw-up he’s been most of his life and he’s tired of running and hiding from the mistakes he’s made. And so he’s ready to face the consequences of his role in Michaela’s shooting. Or is there something more?

Since we’re not privy to much of his thoughts, perhaps Zeke is having a calling that sees him in prison, and so he’s putting himself there. Perhaps he’s even standing in his prison cell during the 828 Calling (from his point of view), so he is serving the greater vision by doing this.

Is There More to Captain Bowers and Troy Davis?

Another question we may be looking deeper at than is altogether warranted is the new Captain Bowers at Michaela and Jared’s precinct. A real hard-ass, she’s really coming down on Michaela for all of her solved cases with anonymous tips (i.e. Callings). Jared knows what’s up with those, but he had Michaela’s back here.

That said, Captain Bowers is fed up with both of them, and is keeping a very close eye on Michaela. Perhaps too close of an eye. Could she be in league, in some capacity, with the Major?

See Also :  ‘Dispatches From Elsewhere’ Trailer Discovers Something Hiding Behind the Veil of Everyday Life

We were almost positive that lab tech Troy Davis was working for the Major, considering his obsessive interest with Saanvi at work, but now we’re not so sure. He’s overly interested in her work, which is suspect, but the Major has a direct line to Saanvi through their therapy sessions, and didn’t seem to know about the DNA sequencer until Saanvi brought it up in session.

Troy already knew about it, as he’d helped facilitate the requisition. So if he’s not in with the Major, who is he in with? He’s just too interested to be what he appears on the surface, which is just somebody interested in Saanvi on a personal level. The dude is giving off creeper vibes, so we think he’s trying too hard to get in good with her because something or someone is wanting him to do that.

Are the Callings Genetic?

The big question of the week is whether or not the Callings are genetic. The hour opened with Grace having a calling ("Stop!") right before a blood test. Is that because she’s carrying Ben’s baby? If so, and if that means Callings are passed on, this is a huge discovery because there will then be entire bloodlines of people with Callings, growing in numbers with each generation.

Also, it’s worth noting that it appears the Calling probably came from the baby and not Grace herself. We can’t confirm that, but it would make more sense than her somehow permanently inheriting this ability because she got pregnant by Ben. But if all 828 passengers are carrying this potential, the Major could purposefully impregnate women by them to try and gain control of these abilities.

Or, it might not even have to be impregnation, if the blood markers are an indication of something in their DNA. A simple blood transfusion could have the power to transfer Callings, then. Or there may be a completely non-scientific reason Grace had a Calling, or Ben’s baby inhereted them.

The narture of the Calling ("Stop!") would seem to simply indicate it was important that Grace’s blood not be drawn by a traditional doctor. That tells us that her blood might now be altered from carrying Ben’s baby, which means all returnees would have unique blood. Saanvi found a marker in the blood of Cal and others, so does Grace have it now? If so, perhaps she would keep the Calling ability even after giving birth.

Is the "Death Day" Genetic?

That leads to Olive’s biggest fear, now, which is that the "Death Day" could be genetic as well. After the death of the returnee who wasn’t gone very long, that theory has haunted the family; the idea they could die five-and-a-half years after they disappeared … and Zeke much sooner considering he disappeared much more recently.

See Also :  Caitlyn Jenner Explains Why Her Kids Didn't Greet Her As She Left 'I'm A Celeb'

So, with how crazy all of this is, Olive’s fear of losing her entire family — and Aunt Mick — at the exactly same time is pretty well-founded and something that would weigh crazy on her. Maybe what she needs to do is go out and get pregnant by an 828-er. Wow, that was dark. We never said it!

Do the Callings Care About the Passengers?

This episode’s case-of-the-week introduced a college kid who lost everything on Flight 828. His mom committed suicide via overdose while he was gone and the college threw out all of his stuff. And yet, the Callings appeared to do him a huge favor.

Granted, it took Ben pushing Michaela to dig deeper into the case so Jared wouldn’t throw TJ into prison for a college girl’s murder, but it was good news in the end. A calling led TJ to her body, which led Michaela to her dorm room where she discovered that the girl (an artist) had salvaged TJ’s belongings and repurposed them into art.

He had lamented that he had no pictures of his mother, and suddenly here was a beautiful collage of the two of them together the girl had created before she died, not to mention a lot of his other belongings.

So this Calling was about stopping a predator, sure, but was it more about doing a kindness for TJ? And if so, does this mean the Callings care about the passengers? We haven’t really seen this side of them before. Or maybe the characters haven’t been discovering the kindnesses the Callings are trying to send their way.

Or maybe this is another manifestation of how they are intensifying, in both positive and potentially negative ways. Or maybe, and this is way more likely, we’re overthinking this and a lot more and this show just isn’t this deep.

We can accept that, though we had a Calling that we’re probably onto at least something here.