IRAN has warned the US strike that killed its top general on Friday counts as an act of WAR – as a second rocket attack near Baghdad reportedly left at least six pro-Iran militants dead.

Majid Takht Ravanchi, Iran’s UN envoy, said in a chilling CNN interview on Friday evening the “assassination” of elite commander Qassem Soleimani was “tantamount to opening a war against Iran.”

The ambassador earlier told the UN Security Council that Iran reserves the right to self-defense under international law.

In a letter, Ravanchi said the killing of Soleimani “is an obvious example of State terrorism and, as a criminal act, constitutes a gross violation of the fundamental principles of international law, including, in particular … the Charter of the United Nations.”

Soleimani, 62, was blown up in a guided missile strike near Baghdad Airport in Iraq as he plotted attacks against American citizens, according to the Pentagon. 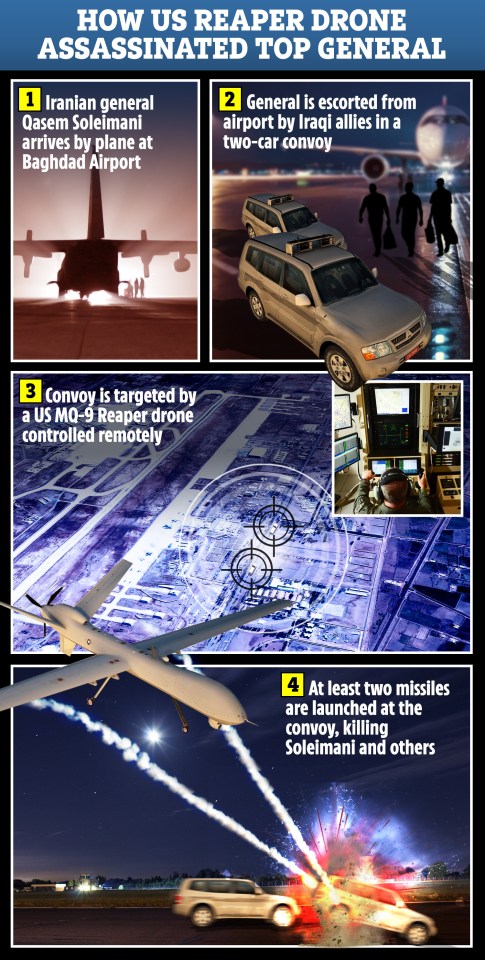 He headed the overseas arm of Iran’s Revolutionary Guards and was regarded as the country’s second most powerful figure after Supreme Leader Ayatollah Ali Khamenei.

Almost 24 hours after his killing, a second rocket attack struck a convoy of Iranian-backed Shi’ite militiamen north of Baghdad.

Dramatic images broadcast on local TV showed a wall of flames erupting from a distance as bystanders watched on in horror.

There were conflicting reports on the number of casualties, but an Iraqi military source said at least six people were killed, while three others were injured.

Iranian-backed militias in Iraq known as the Popular Mobilization Forces confirmed the strike on an alleged medical convoy – but insisted none of its top leaders were killed.

Two of the three cars making up the convoy were found burned out near camp Taji north of Baghdad at 1.12am local time on Saturday.

The American military did not carry out the reported attack, according to an anonymous US official who spoke to the Associated Press.

But other Pentagon officials told Newsweek the strike was a US operation targeting Imam Ali Brigades – with a “high probability” its leader Shubul al-Zaidi had been killed.

China’s Uighur Muslims ‘are being thrown into detention camps for having beards, wearing veils and using the internet’

Neither the Pentagon or US Central Command have commented on the latest strike. 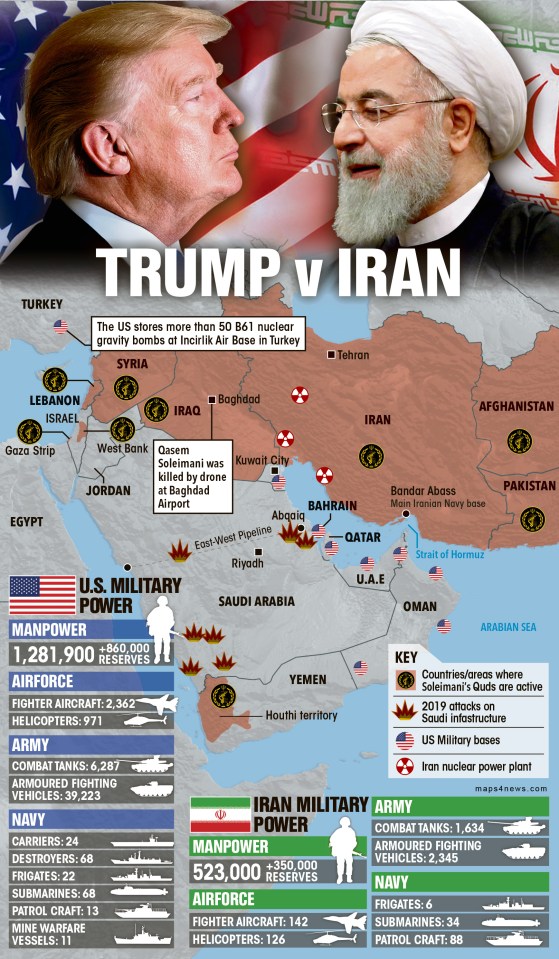 It follows US President Donald Trump’s order’s to “terminate” General Soleimani – an order Mr Trump defended last night as a defensive act to “stop a war” rather than start one.

Speaking on camera on Friday for the first time since the airstrike, President Trump tried to restore calm by saying: “We took action last night to stop a war. We did not take action to start a war.

“Soleimani was plotting imminent and sinister attacks on American diplomats and military personnel, but we caught him in the act and terminated him.

“Under my leadership America’s policy is unambiguous to terrorists who harm or intend to harm any American.

“We will find you. We will eliminate you.

“We will always protect our diplomats, service members, all Americans and our allies.”

President Trump yesterday deployed 3,500 US troops to the Middle East in retaliation to threats from Iran – amid serious concerns the execution could cause the outbreak of World War Three.

WHO WAS QASEM SOLEIMANI?

QASEM Soleimani became head of the Quds Force in 1998, a position in which he kept a low profile for years while he strengthened

He was known as ‘The Shadow Commander’ by his enemies, spending most of his career as a recluse and a spook.

The Quds Force, tasked with carrying out operations beyond Iran’s borders, shored up support for Syria’s Assad when he looked close to defeat in the civil war raging since 2011 and also helped defeat ISIS in Iraq.

Soleimani had survived several assassination attempts against him by Western, Israeli and Arab agencies over the past two decades.

He was the second most powerful person in Iran behind the Ayatollah Ali Khamenei at the time of his assassination.

He was hailed as a national hero by many in Iran and was awarded the Order of Zolfiqar medal, Iran’s highest military honour, last year.

General Soleimani had landed after travelling from either Syria or Lebanon at around 12.30am when he was met by Abu Mahdi al-Muhandis, deputy commander of the pro-Iran Popular Mobilization forces in Iraq.

As the cars passed through a cargo area for an access road leading out of the airport, the vehicle was struck by at least two missiles by a US MQ9 Reaper drone which was being controlled remotely.

Security cameras filmed as at least two missiles were fired at the vehicles – killing all those on board including the general, who could only be identified by the distinctive ring on his severed hand.

The dramatic attack came after months of tensions between the US and Iran during which Tehran shot down an American military surveillance drone and seized oil tankers.

Protesters attacked the US embassy in Baghdad this week, clashing with US forces at the scene.

Major US cities – including New York and Los Angeles – say they have already ramped up security in the aftermath to prevent any reprisals.

Australia fires map: Where are the bushfires in Australia now?

Westerners 'should leave Dubai immediately after killing of Iran general'

There are fears the Iran-backed Hezbollah militant group may already have sleeper cells in the US ready to pounce.

The group – deemed a terrorist organisation by the US – could potentially have targets in its sights, a former CIA operations officer warned.

Sam Faddis said: “Based on what we know we must assume they do and that they can hit targets on US soil at anytime without warning.” 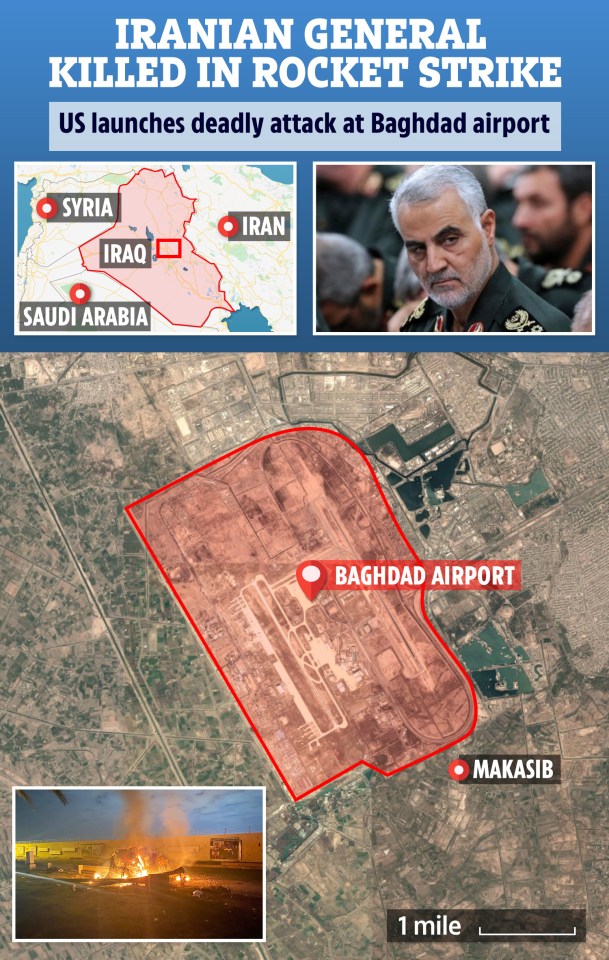 Soleimani is seen wearing a similar ring in this picture[/caption]

THE world is a far better place without war criminal Qasem Soleimani.

He was the truly evil mastermind of the slaughter of countless innocents in the Middle East and had the blood of many British and US troops on his hands.

Naturally, there are worries that ­Donald Trump has lit the fuse for fresh ­violence. But Iran and its proxies unleash constant savagery already, until yesterday under Soleimani’s personal direction. He was the architect of ­horrors in multiple countries.

He will be mourned only by Iran’s Islamic fundamentalists and, of course, by Jeremy Corbyn and his hard-left anti-American nitwits.

But UK Foreign Secretary Dominic Raab’s reaction was mealy-mouthed too. Of course it would be good for both sides to “de-escalate”. True, “further conflict is in none of our interests”. Mr Raab might have added a full-throated condemnation of Soleimani, effectively the world’s No1 terrorist, whose victims outnumber those of Bin Laden or al-Baghdadi.

Yes, the US should have warned Britain of the drone strike, given the heightened danger now to our 900 troops in Iraq and Syria. But it had to act rapidly.

Iranian reprisals may be inevitable. But standing back hasn’t done the West much good. The mullahs at least now need to factor in a US President who’s more ruthless than the last.

Three days ago Ayatollah Khamenei taunted him over the storming of the US embassy in Baghdad. “You can’t do anything,” he sneered.

Trump’s put him straight there.