#Hawkehive, this one’s for you.

We’re giving away three Blu-ray copies of Adopt a Highway, this year’s moving Ethan Hawke drama from Blumhouse that marks the directing debut of actor Logan Marshall-Green (Upgrade, Prometheus). Our review from the South By Southwest Film Festival called Hawke’s performance “equal parts tragic and triumphant,” and three winners will be able to check it out themselves courtesy of a free Blu-ray from RLJE Films. Find out how to enter below.

Here’s the trailer, in case you missed it earlier this year:

Here’s a longer excerpt from our review:

Hawke’s timid yet powerful performance devours sympathy as fuel on altruistic levels of rediscovery and reprogramming. Watch as he shuffles out of his prison cell, darting eyes like an animal freed from captivity. He only wants to do right and live generously, and he never complains about eating condiments between bread as meals. Russell is shy and wounded, but never deterred…

Adopt A Highway is as naked, vulnerable, and warmly fulfilling a debut as you can ask for. Pacing beats could undergo minimal tweaking, but Ethan Hawke’s performance as a convict spat from America’s prison system is equal parts tragic and triumphant. Twenty years lost, but not forgotten. This is a rare film that spirals upwards despite grief and depression being much easier motivational fruits to pluck, and that’s what makes Logan Marshall-Green’s breakout feature such a confident rambler’s ballad written from the unchained heart. It’s patient, forgiving, and effortlessly feel-good. 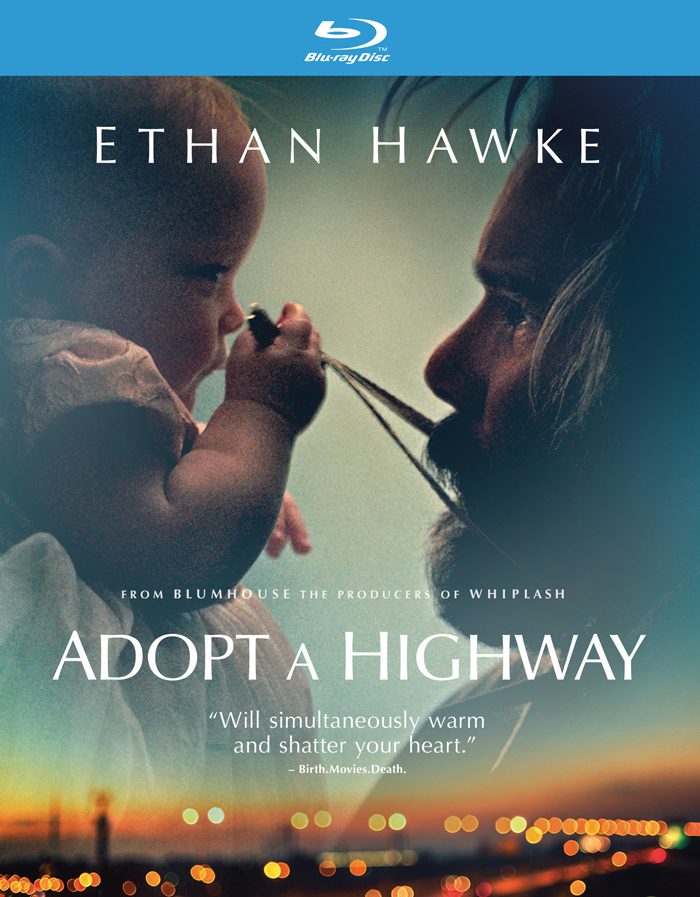 To win a copy of the film for yourself, all you have to do is send us an email at [email protected] with “Adopt a Highway Contest” in the subject line, give us your favorite Ethan Hawke performance, and explain why it’s your favorite. That’s it! You must send in your entries by 11:00am PT on Tuesday, December 17, 2019 to qualify. We’ll select three winners and forward the winning entries to the publicists, who will ask for your address so they can ship the Blu-ray directly to you.

In Adopt a Highway, Russ Millings has just been released from prison after serving 21 years for a 3rd strike conviction for possessing an ounce of marijuana. As he tries to adapt to a world he doesn’t recognize – including trying to learn how to use the internet – he finds an abandoned baby in a dumpster behind the fast food restaurant where he works as a dishwasher. Unsure of what to do, and caught between impulses of kindness and panic, Russ soon realizes this could be his chance at redemption.

Adopt a Highway officially arrives on Blu-ray and DVD on December 24, 2019.

The post We’re Giving Away Three Copies of Ethan Hawke’s ‘Adopt a Highway’; Here’s How to Win appeared first on /Film.