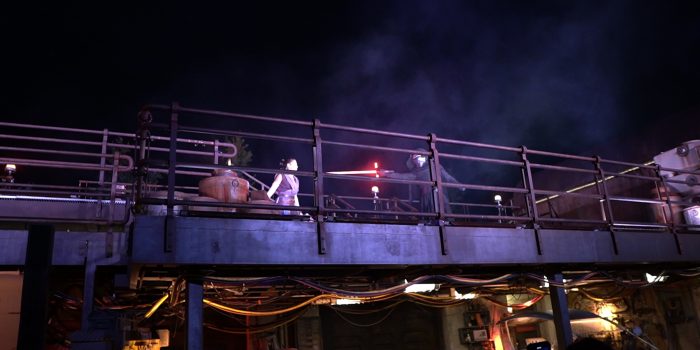 Last week I traveled to Walt Disney World in Florida to experience the grand opening of Rise of the Resistance, the new ride in Hollywood Studios’ Star Wars: Galaxy’s Edge. For the opening dedication, Disney closed Batuu’s Black Spire Outpost for a grand party, which included life-size X-Wing drones, a lightsaber battle stunt show, fireworks and much more. It’s all part of an unfolding narrative Star Wars story that took place at locations around the land throughout the night, giving us a peek at what Galaxy’s Edge should be like every single night.

When Galaxy’s Edge was first announced, they promised an interactive Westworld-style storyline taking place throughout the land that we’ve yet to see fully implemented. I’m hoping the opening night experiment is a peek into the possible future of storylines in Galaxy’s Edge because it should be like THIS every single night. Galaxy’s Edge is already awesome but this would put it over the top. Until then, you can watch my video to get a look at the entire storyline (I was able to run around the land and capture it all).

You can also watch our previous coverage of the new Rise of the Resistance ride, which is incredible.

Or catch our coverage from opening day, including a look at the new Rise of the Resistance merchandise and more:

See Also :  End of an Era! Hank Azaria Will No Longer Voice Apu on 'The Simpsons'

Thanks to Disney Parks for hosting us for this trip. They provided us with travel, accommodations, park tickets, and some food. #hosted

The post Video: ‘Star Wars: Galaxy’s Edge’ Should Be Like THIS Every Night: Lightsaber Battles & Flying X-Wings appeared first on /Film.