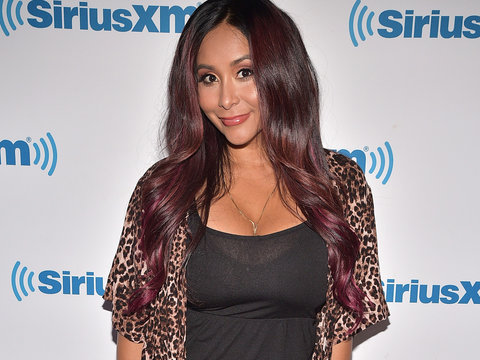 Nicole ‘Snooki’ Polizzi said the moment she realized she wasn’t being her authentic self on ‘Jersey Shore‘ was when she knew she had to leave.

"I think when I was, like, actually forcing myself to be in a situation that I wasn’t happy in. Like, I was forcing myself to be ‘happy,’ and I’m like, ‘That’s not me. I’m not genuinely happy,’" the reality star, 32, said in a clip from her January appearance on The Mel Robbins Show (via Us Weekly).

But the decision was still a difficult one to make as the New Jersey native has been on the MTV show since the beginning for almost a decade.

"It was really hard, but I had to think about my happiness and where I really wanted myself to be, and it’s being a mom and being [with my] kids and not drama and drinking — and drama," she explained.

Snooki shocked fans earlier this month when she announced she would not be returning to ‘Jersey Shore Family Vacation’ Season 4, if there is one, on her December 6 episode ‘It’s Happening With Snooki and Joey‘ podcast.

"And there’s a lot of reasons why, but the main reason is — I just can’t do it anymore," Snooki said. "Our show, Jersey Shore, is about family and making fun of each other and having a good time and laughing and just knowing that it’s all in good fun. Lately, everything is so serious."

"I don’t like the narrative of anything, I’m removing myself, I love you guys so much, I love my roomies to death, they know that, I’m not going anywhere when it comes to them and them being my family," she continued

You know, when I leave my kids and I film the show, like, I want to have a good time,” she admitted. “And I’m putting myself out there, and I just wanna come off as a good person. And lately, on the show, it’s just been very drama.”

The decision comes amid a feud with costar Angelina Pivarnick, prompting speculation the drama was part of Snooki’s decision to split. Angela’s wedding reception didn’t go as planned as Snooki, Jenni "JWoww" Farley and Deena Cortese made a controversial speech that included jokes and jabs at Angela.

TooFab confirmed that the ladies’ speech left Angelina feeling "upset." We’re told Angelina "was upset and stormed off" and the women were not speaking to each other after the affair.

The Ladies of ‘Jersey Shore’ Take to D.C. to Help ‘Free Sitch’