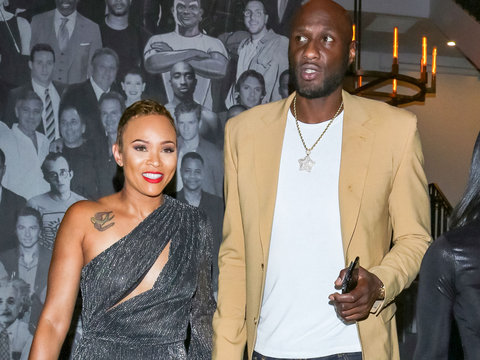 Lamar Odom and his fiancee Sabrina Parr are abstaining from sex before marriage, which she says was his decision after he went into recovery for his drug abuse issues and found a mentor in a pastor.

So the pastor suggested abstaining from sex before marriage as a test to his sobriety and devotion to Sabrina.

"He really made the decision to not have sex with me until we get married, which is kind of why he wants to rush the marriage," Sabrina revealed. "But I’m just in no rush."

She sure as heck isn’t as there is another catch to the pair walking down the aisle together.

Sabrina told the publication she will push back the big day until Lamar fixes his relationship with his son Lamar Odom Jr., who publicly called out his dad last month in an angry post claiming he found out about the couple’s engagement online.

Lamar Jr. later deleted the post and issued an apology, saying, "Last night I was emotional seeing my father got engaged through social media."

"I was hurt and caught off-guard. At the end of the day, I am a teenager that is becoming a young man. I have to be responsible for what I post, I have nothing but love for my dad and want what’s best for him," added the 17-year-old.

According to Sabrina, the father and son have not yet met to reconcile.

"But, I know everything has to happen on their time, so I don’t want to be the enforcer of anything because I don’t want to come off as if I’m rushing their process," said Sabrina.

"I literally will push the wedding to however long back, however far back it has to be, until they become in a really good space. And a space where they’re excited about being a part of wedding," she vowed.