Donald Trump has lashed out at teenager Greta Thunberg after the environmental activist was named Time magazine’s person of the year – claiming she needed to “work on her anger management problem”.

However Mr Trump – who has previously attacked the teenager for her the stern rebukes she has issued to the international community – referred to the move as “ridiculous” on Twitter.

The president wrote on Twitter: “So ridiculous. Greta must work on her Anger Management problem, then go to a good old fashioned movie with a friend! Chill Greta, Chill”.

Mr Trump was also on the shortlist for the title alongside US house speaker Nancy Pelosi –  but did not win the prize has he previously had done in 2016, his inaugural year in office.

Greta has not responded directly to the tweet – but has changed the description of herself on her Twitter profile to “A teenager working on her anger management problem. Currently chilling and watching a good old fashioned movie with a friend.”

The tweet marks the second time the president of the United States has picked on the teenager for her emotional state.

The 16-year-old has been diagnosed with Asperger syndrome, a variant of autism which can effect a persons relation to social and emotional cues while also having an impact on communication. She describes the condition as a “superpower” that she says “sometimes makes me a bit different from the norm”.

See Also :  Woman, 60, dies during cake-eating contest after ‘shovelling’ one into her mouth 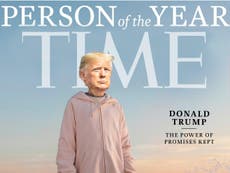 In September the president attended the same event as Greta, who furiously told world leaders she would “never forgive them” for letting down her generation on climate change. In response Mr Trump tweeted “She seems like a very happy young girl looking forward to a bright and wonderful future. So nice to see”.

Greta responded at the time as she did to the latest attack – changing her twitter page’s description to “A very happy young girl looking forward to a bright and wonderful future.”

The president’s long-standing interest in the accolade and the magazine stretches back to before his time in the White House.

He complained about not having been listed in the magazine’s top 100 people in 2012, while in 2017 claimed that he would have won the award two years running but turned it down. Time magazine denied the claim.

In the same year he was chastised by the magazine for having hung fake Time covers with his face on them on the walls of his Mar-A-Lago golf course.