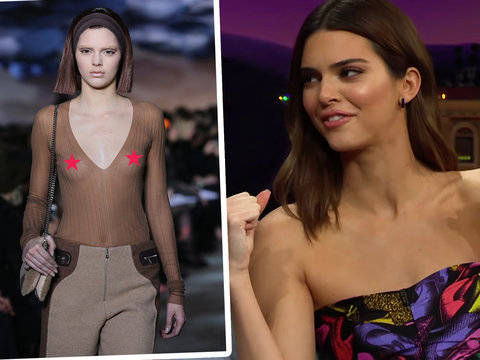 Kendall Jenner had a trial by fire in the beginning of her modeling career, as she was asked to really show her stuff for her high fashion catwalk debut.

During a stop by the “The Late Late Show” on Wednesday, the supermodel dished on early runway days she traded war stories with veteran model Tracee Ellis Ross, much to the chagrin of guest host Harry Styles who attempted to keep all the stories straight.

“Yea, my boobs were out the first show I ever did. I had just turned 18 and they were like ‘Take the shirt off,'” the 24-year-old reality star confessed while throwing her arms over her head. While she had done runway work in the past, she walked her first show as an adult at New York Fashion Week in 2014 for Marc Jacobs in a totally see-through top.

The reveal was prompted by Tracee telling the story of her first runway show, walking for Thierry Mugler in Paris alongside Naomi Campbell.

“I was terrified cause my boobies were out and I was 19-years-old and my mom was going to be furious,” the “Black-ish” star detailed.

“That’s the best part. My first show, my tits were out!” Kendall chimed in.

Tracee said she broke down in tears in front of Naomi because she “didn’t know what to do” and the iconic British supermodel told her if she wanted to be a model — “you wear what they give you.”

See Also :  This Week In Trailers: Jasper Mall, Wake Up, DAVE, Run This Town, The Pharmacist

Kendall and Kylie Jenner Have Different KUWTK Contracts Than Their Sisters

Kendall has come a long way since those early days of photo shoots and catwalks as she banked $22.5 million in 2018 to be named the highest paid model of that year, edging out Karlie Kloss who earned a mere $13 million.

The Ladies of Bombshell Are Radiant at Los Angeles Premiere