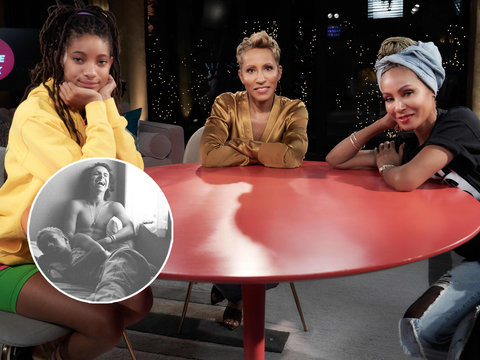 Though it was not a fun time for the family, the 2014 Child Protective Services investigation into the Smiths brought them closer together than ever before.

On Tuesday’s Ask Us Anything episode of “Red Table Talk” on Facebook Watch, Jada Pinkett Smith, daughter Willow Smith and mom Adrienne Banfield-Jones opened up about what it’s like to fight back against rumors in the public eye. While Jada believes most of the time it’s “just not worth it” to fight back, the CPS investigation and the incident that sparked it really got to her.

The conversation begins around the 8:00 mark.

This all went down back in 2014. Willow was 13 at the time and CPS got a call accusing Will and Jada of starving their daughter. The investigation took place immediately after the family got backlash over a photo of the teenager in bed with shirtless, 20-year-old family friend Moises Arias.

“It started with the whole Moises thing,” Willow recalled. “The boy basically lived with us,” said Jada, adding that Moises and his brother Mateo were “like her brothers” and were “always in this house with their shirts off.”

“There was no sexual intonation in that picture whatsoever, but I find that other celebrities — females who aren’t black, who are younger and who do post things that are way more sexual with that — they don’t get any backlash,” added Willow. Jada said the backlash over photo was “the first time I’d ever got furious” and made her realize “there’s a difference here.”

“There’s something about black skin and anything sexual and the fact of what’s considered if you have black skin and inappropriate versus white,” she added.

With CPS visiting the home shortly after, Willow recalled thinking to herself, “You could be helping so many kids right now and you’re wasting your time with a child who has everything that they need.”

Looking back, Jada said their case worker “was a nice lady” and remembered her kids feeling a certain type of way about the visit. “The way they were conducting these interviews were literally like, ‘What are you doing here?'” she recalled. “I was like, ‘I need for y’all to be on your best behavior.’ When I tell you it was the complete opposite and I was sitting there like, ‘I cannot believe this.'”

During the interview, Willow came into the room with a bowl of cereal, saying she just got up and was eating her first meal of the day. “Playing games. They already think we’re starving you and you’re gonna walk in with a bowl of cereal at 2:00pm and say this is your first meal,” said Jada. “I was like, Lord Jesus, take the wheel!”

Though it was a tough time, Jada added “that was a moment I feel like we really locked up together as a family.” She added, “the kids got to see for the first time, why Will and I would be so protective. People try to hurt you.”

They were cleared of any wrongdoing.