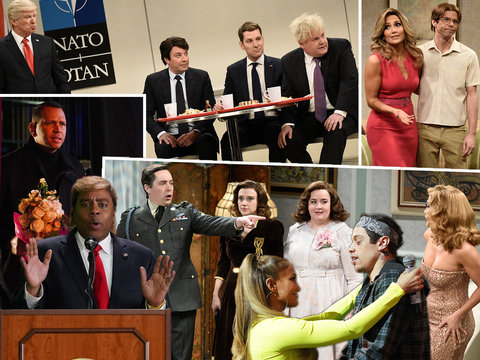 Jennifer Lopez is a versatile and formidable talent, so it’s a shame they only gave her half of a good show this week on "Saturday Night Live" to show off what she could do.

Leaning into weird over funny for many of the sketches, the whole episode felt like it was filled with half-baked sketches that never really came together, and then maybe they ran out of time and just went with it.

Last time with Will Ferrell, they had so much material there were great sketches that were cut before air, but this time they didn’t even have enough good sketches to fill the regular broadcast, which is a shame because J.Lo was game for anything and actually brought everything you wanted in a guest.

She even brought hubby Alex Rodriguez in for a quick cameo, while the cold open brought in more ringers as political heavy hitters. We have mixed feelings about this as we know it’s a great way to generate buzz for the show, but it doesn’t allow the repertory players to flex their muscles in these roles.

That said, James Corden was absolutely inspired as British Prime Minister Boris Johnson in a brilliant cold open with Jimmy Fallon as Canadian PM Justin Trudeau and Paul Rudd as French President Emanuel Macron taunting Alec Baldwin’s Trump. At least Kate McKinnon’s Angela Merkel got to slip in with all the guest stars.

In many ways this was a quintessential episode of "SNL," one that will look much better when they trim it to an hour for prime-time repeats as some of these sketches are just downright awful, while others were laugh-out-loud brilliant. And those that were good were among some of the best of the season.

As usual, we’re ranking all the sketches from worst to first, including the Monologue, Cold Open, "Weekend Update" and any sketches that were cut for time but made their way online. We’ll skip the musical guests, because they’re not usually funny – unless Ashlee Simpson shows up. We wrap up with a look at the cast-member who had the strongest week.

Adam Sandler Gives More Details About His SNL Firing: ‘He Didn’t Like Farley and Me’

Three women from Wisconsin. "Cit-iots." A girl who came with the hardware store. And bears who wake up from hibernation for open food. It’s like the writers room threw darts at a wall of general concepts to come up with this sketch and none of it was particularly funny. Kate McKinnon and Jennifer Lopez could not nail the Wisconsin accent and nothing else about the sketch really worked, either. It was just … weird.

It was great seeing Melissa Villasenor take center stage in a sketch, but this one about two Latinas selling hoop earrings just had absolutely nothing going for it other than bad photoshops of people with hoop earrings in. It was a one-note sketch but even its note wasn’t even funny once.

Was anyone clamoring for a return of the fitness trainers tryout sketch from October? It wasn’t that funny the first time and it certainly didn’t get any funnier this time around. Even the banter between Ego Nwodim and Mikey Day paled in comparison to when it was Alex Moffat trying awkwardly to flirt with Ego at SoulCycle. The characters portrayed by the cast-members trying out weren’t unique or funny enough and it was all moving too fast for any of the jokes (?) to land.

Playing into stereotypes of rich white people being afraid of people of color, "SNL" almost had something here, but mostly it turned into a showcase for J.Lo to sing some ’90s hip-hop songs with Christmas (read "Home Alone") lyrics. The problem was that this one teased a few different directions for the humor to go without really mining any of them, leaving a disjointed sketch that only Pete Davidson seemed to find really, really funny.

It looks like they may have finally run out of ideas for this recurring bit simply about recasting Trump as a black man. In this case, the tide turned when he revealed it publicly at a rally and his own followers turned on him … violently. The social satire was stronger when it was the inherently racist system that didn’t have his back, but it didn’t work as strongly implying his supporters were so dumb they didn’t realize he was black and turned on him the second he … outed himself?

J.Lo was absolutely adorable breaking down an incredibly fertile and exciting time in her life and career to kick off her monologue. She looked great in that tux, and then proved she may actually look better than ever when she ripped it off to reveal her iconic green Versace dress underneath (yes, that’s the one!). She proved why she’s a triple threat with humor, warmth and even a little Christmas ditty complete with a solid Rockettes kickline performance. This woman makes 50 look better and more vibrant than most people’s 20s. Plus, how many people can simply charm their way through a successful monologue? Maybe she’s a quadruple threat.

Yet another sketch about how J.Lo is gorgeous, this one centered around a man coming to wed one of three sisters and the fact that Aidy Bryant and Kate McKinnon had convinced J.Lo that she was hideous. Apparently, they’ve managed to keep her from ever looking in a mirror or seeing a man. Ridiculous? Sure, but the conceit was necessary for the sketch. Everything they tried to make her ugly didn’t work, but the best part of this golden-age movie parody was just how abruptly it ended with the arrival of Beck Bennett’s corporal. That got a surprise laugh.

Colin Jost, a Catholic, went in hard on his own religion in response to Nancy Pelosi’s using it as explanation for why she doesn’t hate Trump with reporters. As a Catholic, this reporter agrees with everything he said. He also went in on Trump calling Trudeau "two-faced," adding, "I’ve definitely seen Trudeau with one other face," before throwing up that infamous blackface pic. All of that is to say it was nice to see the boys back in form with sharp jabs at every target.

Kate McKinnon trotted out her Nancy Pelosi impression to address her comments head on, correcting Colin that at least some of her "passive aggressive" prayers for the president are "aggressive aggressive." The impression itself was more wide-eyed than actually evoking the Speaker of the House and the prayers were just far-left trolling of Trump and the right than being particularly clever or humorous.

The "in other news" segment took a look at that controversial Peloton exercise bike ad, with a horrific slogan, and predicted a murderous future for the baby obsessed with a mannequin head. Thankfully, the news segments were solid this week, because neither of "Update’s" guests were particularly great.

Or maybe we just really don’t like Beck Bennett’s Jules, an unemployed pretentious idiot "who sees things a little bit differently." Maybe it’s because there are people like this and you just want them to get a job and live in the real world. And maybe that’s because if we have to live here, why should they get a pass to live in whatever world they call home? Oh,the trust fund? Maybe that’s why we hate him. In truth, the character is just too thin and repetitive, without the guaranteed humor of a, say, Drunk Uncle or Stefan.

Jennifer Lopez Recalls Director Trying To Get Her Topless

Pete Davidson’s Chad is back, and he’s got the attention of yet another beautiful pop princess. That’s the meta behind our latest look at the world’s biggest slacker, "okay." We love that he had no idea who she was (or A-Rod, who had the perfect cameo to close the bit out) and we loved even more that she poured every bit of her rom-com experience into really laying on the attraction thick while he remains as oblivious and clueless as … well, only Chad could be. The quick cutaways and pure idiocy are always a delight, but proves once again that Chad is only as good as his scene partner, which is why he was great this week.

A fairly straightforward potty tool commercial for men became immediately hilarious when J.Lo stepped in to ask how this contraption works for women and Kyle Mooney could not for the life of him figure out how women’s anatomy works. It spoke so much about marketing targeting men, not bothering to even understand the female market and even went so far as to have brilliant animation that was just as confused about all of this as Kyle. "Is it the clitoris?"

Perhaps even funnier than Jimmy Fallon’s Justin Trudeau and Paul Rudd’s Emmanuel Macron being the "cool kids" at the NATO cafeteria was James Corden’s Boris Johnson both being one of them and also being not quite cool enough. We’re still laughing at him trying to fix his hair. They took it to the next level when they started teasing Kate McKinnon’s Angela Merkel over her Obama crush, all the while shunning and mocking Alec Baldwin’s Trump relentlessly. It was a sketch with so many layers, and yet by coming at it sideways through this "high school popularity" angle rather than straight on, it was a political sketch that felt wholly fresh and exciting. Even better, they nailed the ending with Cecily Strong’s Melania coming out as part of her "Be Best" anti-bullying campaign.

See Also :  ‘Jumanji: The Next Level’ Star Alex Wolff on What He Learned From ‘Hereditary’ and Making His Directorial Debut [Interview]

So the whole joke here is that Jennifer Lopez is so beautiful, Kenan Thompson can’t believe that Mikey Day’s character is her husband. That’s it. And pretty much every moment and every joke served that premise, with Mikey lamenting he never gets lucky (like winning a home makeover) and the fact that J.Lo asked him to marry her … three times! We thought it might get old, but when Beck’s carpenter just automatically assumed she was blind (because of Mikey), we realized they had new depths to plumb here, and it actually worked because of how cluelessly sweet J.Lo was throughout. Props to Kenan for being able to sell the repetitive jokes through force of personality, and Bowen Yang for having the –ahem– cajones to go there.

PLAYER OF THE WEEK

Aside from the sketches focused on her beauty, Jennifer Lopez did a great job of settling into the ensemble, allowing some of the regular players a real chance to shine. And yet, this week’s strongest performances came from the show’s longest-tenured stars.

Heidi Gardner was all over the place, but usually in supporting roles. Nevertheless, she’s making a huge statement for being one of the bright futures of the franchise, alongside a stronger outing for freshman Chloe Fineman.

But it was Kenan Thompson and Kate McKinnon who battled it out this week. Kate was fantastic again as Angela Merkel and one of the jaded sisters in the classic "Corporal" film scene, but faltered a bit with her Nancy Pelosi and Wisconsin hardware employee.

So the edge has to go to Kenan, who was on fire as a rascally caroler and Darius Trump. But he absolutely killed us with his reactions as an HGTV host who can’t believe Mikey Day’s Smurf-loving dweeb is married to J.Lo.