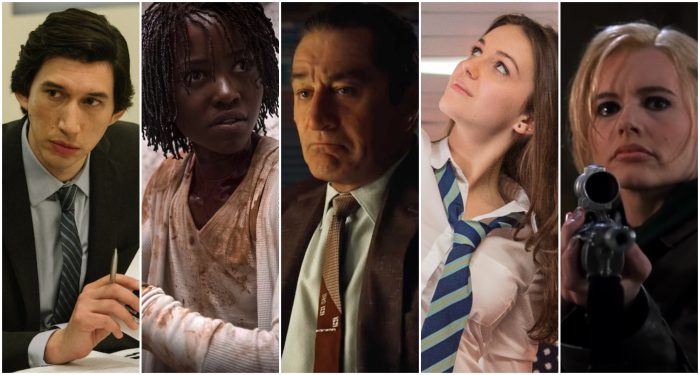 (Welcome to Now Stream This, a column dedicated to the best movies streaming on Netflix, Amazon, Hulu, and every other streaming service out there.)

Hello, streamers! The end of the year is almost upon us, and there’s a surprisingly great group of movies available to stream right this second. Since we’re now in full-blown holiday season mode, I included one or two Christmas-themed films to help get you in the spirit. Beyond that, you’ll find three of the best movies of this year, a Disney classic that’s only gotten better with age, some great Greta Gerwig content, and more. These are the best movies streaming right now. Let’s get streaming!

The Irishman
Now Streaming on Netflix

The Irishman arrived on Netflix just before the Thanksgiving holiday, which means most people have probably watched it by now. But seeing as it’s my favorite movie of the year, I figured I had to include it. Is it a long movie? Yes it is. Does it have long quiet stretches? It sure does. Is it boring? No, not even a little bit. Martin Scorsese‘s crime epic is the logical conclusion to a loose trilogy that started with GoodFellas and continued with Casino. GoodFellas is a film about youth – wild, crazy, coked-up youth being lured into crime. Casino is an adult-to-middle-age journey – a film about growing a little older, but not much wiser. And now, The Irishman tells a tale of life nearing the end of its journey. A film about older people slowly realizing the world has passed them by, and the things they devoted their lives to have blown out like a candle flame. Robert De Niro gives his best performance in years as mob hitman Frank “The Irishman” Sheeran, who, as he approaches death, spins a decades-long tale of his life of crime. De Niro is backed up by Al Pacino, having a blast as the constantly volatile – but somehow likable – Jimmy Hoffa, and Joe Pesci, phenomenal as Frank’s mob boss mentor. Pesci has played gangsters before, but not like this. His Russel Buffalino is the antithesis of the violent hot-heads he’s famous for. Instead, he’s a soft-spoken, almost grandfatherly presence – who also happens to be deadly. As Scorsese follows these men across the years, we watch as they age before our eyes, growing older, and older, and older, to the point where their bodies fail them, their acquaintances leave them, and everything that once seemed so important no longer matters. It’s a masterpiece.

For fans of: GoodFellas, Casino, The Conformist, dipping bread in the good grape juice.

I wish The Report was getting more attention as we end the year. I saw this movie all the way back in January at Sundance, and I haven’t stopped thinking about it since. After an extremely brief theatrical release, Amazon now has the political thriller available to stream – and it’s a must-see. Based on a true story, The Report follows Senate staffer Daniel J. Jones (Adam Driver) as he investigates the CIA’s use of torture in the so-called “War on Terror.” Jones ends up butting heads with practically everyone, even his boss, Dianne Feinstein (Annette Bening). The more he digs, the more he realizes that the government wants the truth to stay hidden. Writer-director Scott Z. Burns packs a lot of information into the movie, which means there are many scenes where characters rattle off page after page of exposition. That could make for a boring experience, but Burns knows just how to make it work. It helps that he has Adam Driver in the lead, because Driver somehow manages to make long monologues as exciting as watching a car chase.

For fans of: All the President’s Men, Spotlight, people throwing file folders on desks and then yelling about the contents therein.

Us
Now Streaming on HBO Now

This year has felt so long that you might’ve forgotten Us opened in 2019, but it did. And it remains one of the year’s most fascinating films. Jordan Peele‘s follow-up to Get Out is a labyrinthine horror movie full of hidden meanings and dense subtext that deserves to be studied and obsessed over. Much like Stanley Kubrick’s The Shining, Us is a movie that reveals new depths and meanings every time you rewatch it. The story follows a vacationing family – played by Lupita Nyong’o, Winston Duke, Shahadi Wright Joseph, Evan Alex – who end up coming across their own terrifying doppelgangers. That concept on its own is creepy enough, but Peele takes things deeper, dealing with classism, marginalization, and more. Nyong’0 is remarkable in her dual role, and it’s a little crazy that she’s not being mentioned more prominently in the current awards season chatter.

For fans of: The Shining, Funny Games, rabbits.

The Long Kiss Goodnight comes from writer Shane Black, the patron saint of violent Christmas movies. Before the Bourne franchise, there was this – the story of a super-assassin with amnesia. Geena Davis is that super-assassin, and she’s now living as a suburban mom, completely unaware of her violent past. Soon, it all comes back – along with people trying to kill her. Davis teams with a private eye, played by Samuel L. Jackson, and the two get caught up in a journey involving lots of explosions, lots of twists, and lots of scenes of Davis kicking ass. The Long Kiss Goodnight wasn’t a flop, but it didn’t attract nearly as much attention as it deserved. Now, years later, it’s developed a healthy cult following. It’s Christmastime setting makes it the perfect movie to watch during the holidays. Sure, lots of people get killed, but isn’t that what Christmas is all about?

Ready to experience the joy of a zombie comedy Christmas musical? No, you’re not. No one is. Anna and the Apocalypse is a gleeful oddity – a low-budget horror musical that just happens to have incredibly catchy songs. The first twenty or so minutes of this film are bursting with energy and delightful dance numbers tailor-made to put a big, goofy grin on your face. The film slowly starts to run out of steam after that, but remains an overall gem. The story involves a zombie outbreak in a small Scottish village, and the high school students who attempt to stay alive – while singing. A lesser film might have found an ironic way to explain why this is a musical, but in the tradition of the great musicals, Anna and the Apocalypse just presents them as-is, and the results are charming.

For fans of: Shaun of the Dead, The Dead Don’t Die, the magic of song!

Hollywood loves a musician biopic, but more often than not, they tend to follow a boring formula. Love and Mercy is one of those rare exceptions that tries something different. The film is the story of Brian Wilson of the Beach Boys, but rather than a by-the-numbers story, Love and Mercy jumps back and forth between the 1960s and the 1980s. We see a young, but already successful, Brian (Paul Dano) slowly being overcome by undiagnosed mental illness. We also see an older Brian (John Cusack) living in a kind of fog, his entire life being controlled by his therapist (Paul Giamatti). The story is told with remarkable compassion, and director Bill Pohlad does a fabulous job conveying Brian’s deteriorating mental state in a realistic, non-exploitative way. Cusack and Dano are both strong as the different Brian Wilsons, and Elizabeth Banks is quite good as a woman the older Brian meets and falls for. If more musician biopics would attempt approaches like Love and Mercy, we’d all be better off.

For fans of: I’m Not There, Rocketman, Paul Giamatti yelling.

The Rocketeer
Now Streaming on Disney+

The Rocketeer was supposed to start a franchise for Disney, but the box office returns were underwhelming. What a shame – we could’ve used a few more films like this, whiz-bang, aw-shucks adventures bursting with art deco style and old Hollywood glam. A pulpy, rollicking adventure, The Rocketeer follows a stunt pilot (Billy Campbell) who comes across a rocket pack that enables him to take to the sky. Of course, since it’s the 1930s, and The Rocketeer is cut from the same mold as Indiana Jones, the Nazis are after this thing, too. Throw in a swashbuckling actor (Timothy Dalton), a beautiful dame (Jennifer Connelly), a mobster (Paul Sorvino), and Howard Freakin’ Hughes (Terry O’Quinn), and you’ve got yourself something special. All of this is underlined with James Horner’s soaring, triumphant score – the type of music that makes you want to fly.

For fans of: Indiana Jones, The Phantom, punching Nazis.

Frances Halladay (Greta Gerwig) is 27-years-old, but in her own words, she’s “not a real person yet.” Frances Ha is a black and white beauty, a portrait of a young woman adrift and unsure just what the hell comes next. While Frances goes through several trials and tribulations, there’s a real warmth at work in this film from director Noah Baumbach, with a script by Gerwig and Baumbach. While this is a Baumbach-directed film, it belongs almost entirely to Gerwig, who makes for such a likable, endearing protagonist, even when she’s making terrible choices.

For fans of: Mistress America, Lady Bird, maxing out your credit card to go to Paris.

Believe it or not, there are some people who have no idea that legendary filmmaker Robert Altman directed the live-action Popeye movie. But he did! And the results are truly strange. All the familiar components are there – spinach, hamburger jokes, and so on. But all of it is filtered through Altman’s unique style, including his love of almost incomprehensible simultaneous multitracks for sound. Robin Williams and Shelley Duvall are both perfectly cast as Popeye and Olive Oyl, and you can’t beat the quirky songs courtesy of Harry Nilsson.

For fans of: Watching Robert Altman movies and thinking, “Wouldn’t it be funny if he directed a cartoon adaptation?”

This slow-burn, very under-the-radar creeper stars Jeff Daniels as a college professor who wakes up on morning and discovers his wife hasn’t come home. He doesn’t want to jump to any conclusions, but soon it becomes clear that something is very, very wrong. Daniels spends the entire movie in one location, and while other characters stop by, it’s more or less a one-man show as we watch Daniels slowly unravel. Is the house haunted? Is he going insane? Is this all a nightmare? You’ll have to watch it to find out.

For fans of: Lost Highway, Silent Hill, Jeff Daniels walking around in his pajamas.

The post Now Stream This: ‘The Irishman’, ‘The Report’, ‘Us’, ‘The Long Kiss Goodnight’, ‘Anna and the Apocalypse’ and More appeared first on /Film.