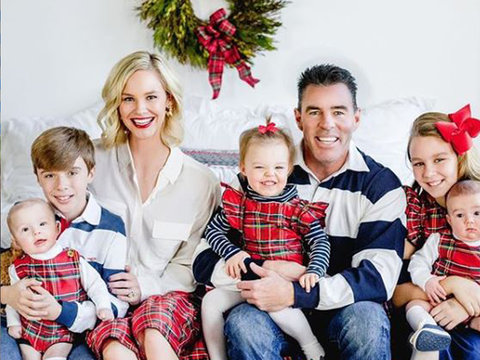 And the former "The Real Housewives of Orange County" star wants as much with her estranged husband, Jim Edmonds, as she has "really high hopes" for their future in co-parenting their three children — daughter Aspen, 3, and twin sons Hart and Hayes, 17 months.

"I think the new year especially, and the new decade, is a great way to kind of launch positive thinking and the law of attraction," the 35-year-old told US Weekly at KIIS FM’s iHeartRadio Jingle Ball on Friday.

Kelly Dodd Willing to Give Up RHOC for Fiance Rick Leventhal, Dishes on Napa Wedding

"I don’t know. New beginnings are huge, so I’m looking forward to that,’ she added.

The former pair settled on 50/50 joint custody of the three children back on November 27, after a lengthy series of public slams against each other, which began after Jim — who filed for divorce in October — allegedly cheated on Meghan with their 22-year-old nanny.

Jim and the nanny both denied the claim, while Meghan clarified her thoughts on the alleged affair in a blog post titled "Broken" in October.

"To be clear, I don’t know if Jim slept with our babysitter or whether they were just being exceedingly inappropriate by hanging out socially without either of them telling me (and Jim expressly lying to me about it)," Meghan wrote at the time.

"I’ve gone back and forth with my thoughts for a couple days but as I write this, I don’t think he did. But I still don’t understand why he’d lie."

Recently, Meghan admitted she was still in a state of shock at their messy split.

"Divorce had been discussed as something that could be possible but I truly thought he could change and work through his demons," she told US Weekly at them time. "Divorce never really crossed my mind. I had to find a divorce lawyer in a matter of hours. He filed so quickly that it seems to me (and others) it had been ready to go and he just was waiting for an event to happen so he could pull the trigger."

Meghan celebrated with their three children at home, while Jim spent the day with his children from previous marriages — Hayley, 22, Landon, 13, and Sutton, 10.