A BRITISH woman was revived after her heart stopped for more than six hours – then made a miraculous recovery in what doctors have called an “exceptional case on a global scale”.

Audrey Mash, 34, became separated from her husband Rohan Schoeman when they were caught in a snowstorm in northern Spain’s Pyrenees mountains. 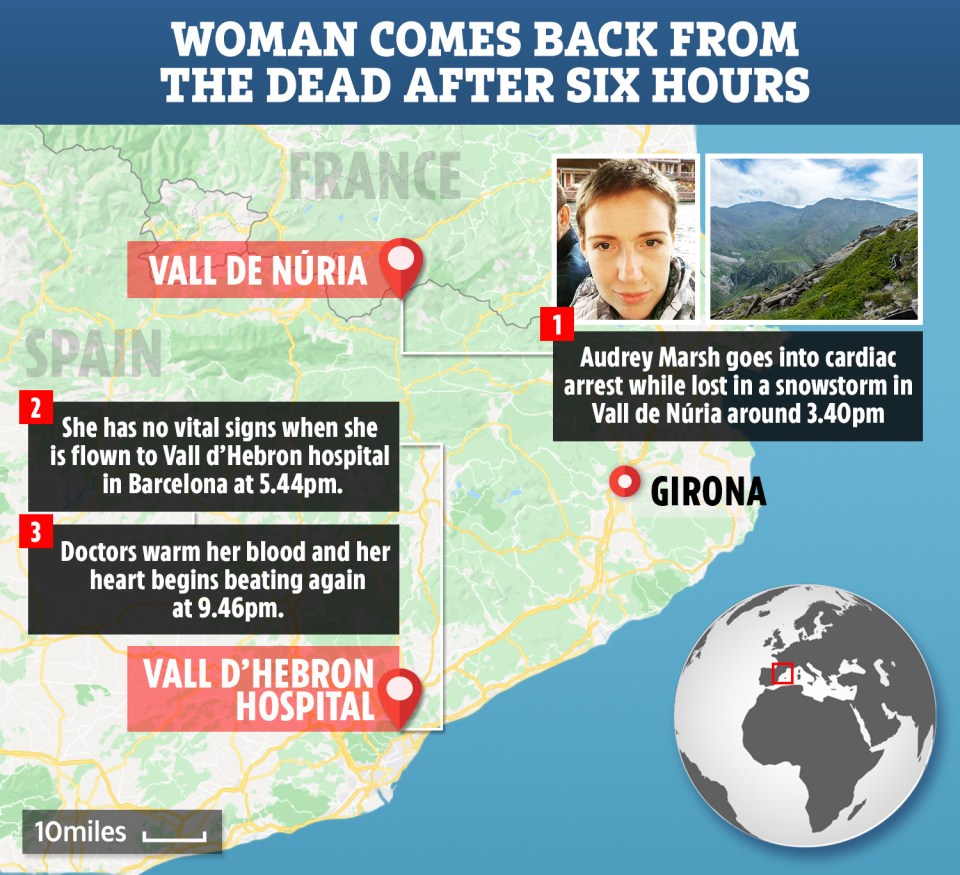 The Barcelona-based English teacher suffered severe hypothermia, lost consciousness and went into cardiac arrest – meaning her heart had stopped beating and she was technically dead.

More than six hours later she was revived at Barcelona’s Vall d’Hebron Hospital.

Dr Eduard Argudo told a press conference today: “This is an exceptional case on a global scale.

“It is the longest cardiac arrest ever recorded in Spain.”

Audrey, who cheated death while walking in Vall de Núria near Girona on November 3, has since made a near-full recovery.

She said of her ordeal: “I can’t remember anything about that weekend.”

She added in quotes published by Catalan media: “I didn’t realise my life was in danger until I was in hospital.”

Audrey was airlifted off the mountain after firefighters used phone calls and photos sent to friends to trace the area where she got lost around 3.40pm.

She had no vital signs when she reached hospital at 5.44pm, her heart had no electrical activity and her kidneys and lungs were not working.

However doctors believed she had a chance if they treated her hypothermia.

A special machine that performs the functions of the heart and lungs kept oxygen flowing in her arteries while warming her blood to raise her temperature from 18C to 30C.

Once she had warmed up, medics tries to restart her heart with a defibrillator but it did not work.

Then her heart started beating on its own at 9.46pm.

Remarkably she was left with no brain damage despite the length of her cardiac arrest, only some problems thought to relate to her hands from the hypothermia.

Dr Argudo said: “There are practically no cases of people who have been revived after their heart has stopped for so long.”

PASS OUT IN PAIN

Moment man faints while being flogged for having sex in Indonesia

Her case is remarkably similar to the miracle survival of seven teenagers who came back to life six hours after their boat capsized into a fjord in Denmark.

We told today how the victims had been dead for two hours when rescuers pulled them from the icy water in 2011.

In the first case of its kind, doctors slowly warmed them up and their hearts started beating again four hours later – six hours after they went into cardiac arrest.

The teens’ extraordinary story is told in a BBC documentary, Back From The Dead, featuring interviews with young survivors and emergency workers.

Although extremely rare, there have been other cases of 'dead' patients with hypothermia who were revived.

In 1999, a 29-year-old Swedish woman was taken to hospital with a body temperature of just 13.7C after she went into cardiac arrest while trapped under ice for 80 minutes.

She looked “absolutely dead” – but after her blood was warmed up, she survived.

And in 2011, seven Danish teenagers whose boat capsized in an icy fjord were revived six hours after their hearts stopped beating.

One boy had a body temperature of 17.5C.

Dr Michael Jaeger Wansche, who treated them at Rigshospitalet in Copenhagen, said it was the hypothermia that gave him hope.

He tells a new BBC documentary: “They’re clinically dead young teenagers… [but] when you are as cold as they were, we know that we can resuscitate.

“They are dead but not really dead. We still have a chance.”

The very low temperature means metabolic processes slow down – so cells don’t need as much oxygen.

Therefore the teenagers did not suffer the irreparable brain damage that usually occurs during cardiac arrest, Dr Wansche said.

See Also :  When did World War One start, how many people died and what was life like for the soldiers in the trenches?