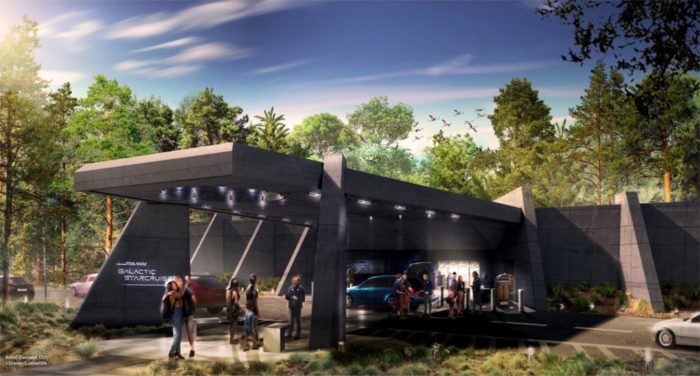 Last night, Disney announced that Star Wars: Galactic Starcruiser, the company’s immersive Star Wars hotel experience, will open at Walt Disney World in 2021. The studio also released a couple of new pieces of concept art, and you can learn more below about how the experience of visiting the hotel will flow directly into Star Wars: Galaxy’s Edge.

According to the official Disney Parks blog, Star Wars: Galactic Starcruiser will launch at Walt Disney World sometime in 2021. (Still no word yet on whether a version is being planned for Disneyland in California.) When guests pull up, either using their own vehicles or Disney transportation, they’ll check in at the curb and then enter through the Galactic Starcruiser Terminal (pictured in the concept art above), a loading area which will then direct guests into “an exclusive launch pod for travel up to the Halcyon, your starcruiser in a galaxy far, far away. Through the pod’s viewports, it looks as though you are traveling through space to approach the massive ship that is much too large to land on any planet.” Every window in the Halcyon makes it appear as if you’re looking out into space; you can see the designs of the ship and learn about its in-universe origins here.

Typically, Disney resort hotels are not located so close to the parks, but this one is different. To complete the feeling of total immersion, the Galactic Starcruiser is built directly next to Star Wars: Galaxy’s Edge – although to travel from the Halcyon ship down to Black Spire Outpost on the planet of Batuu, guests will board specific in-story passenger transport ships which deliver them onto the planet’s surface without breaking the illusion that they’re living out their own Star Wars adventures. 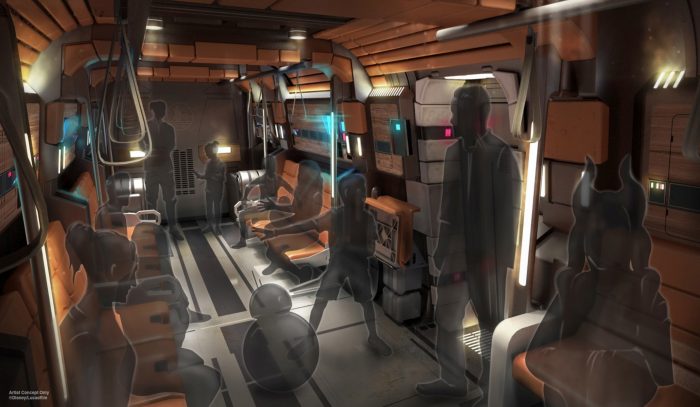 Guests must book at least a two-night stay in the hotel, and Disney Parks explains that “throughout the journey, you will be invited to delve deeper into your personal adventure by participating in onboard activities, interacting with characters, crew, other passengers you meet, and becoming part of the action and the broader Star Wars saga.” While on board, guests will be able to visit the ship’s bridge, where they can control some of the ship’s interactive systems for navigation and defense while a battle rages on just outside. Plus, a previously-released piece of concept art revealed that there will be a training station where you can wield a lightsaber and deflect laser blasts.