Harry Styles is officially riding a “Watermelon Sugar” high following his musical guest performance on Saturday Night Live.
After delivering a couple of One Direction jokes during his opening monologue as the show’s host on Saturday night (Nov. 16) and flexing his comedic chops in a few sketches, Styles donned a sparkling black sequined jumpsuit to sing through “Lights Up,” the first hit off his forthcoming sophomore album.

Instead of going with the highly danceable groove that made the track an instant earworm, Styles opted to change up the vibe of “Lights Up” and went with a smooth, stripped-down R&B rendition of the single instead. With little more than the piano, an acoustic guitar, a trumpet and the intricate harmonies of his back-up singers, Styles belted every high note and danced to the beat of the song’s bridge.
For his second song, Styles donned a ripe, red and pink suit — a perfect choice for “Watermelon Sugar,” which he performed live  merely an hour after he released the audio. 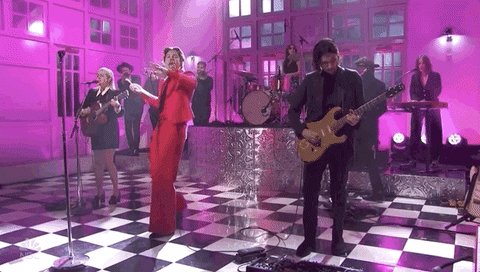 4,516 people are talking about this

“Lights Up” may have been more subdued than the recorded track, but Styles brought all of the energy and might of the band behind him to “Watermelon Sugar.” Styles had teased the name of the tune back in October, and connected the track to “Kiwi” off his self-titled debut album with a mysterious tweet. He was clearly elated to be giving “Watermelon Sugar” its big debut, and euphorically punched the air in between verses.
Styles is set to kick off his Love On Tour trek on April 15, 2020 in Birmingham, U.K. He’ll likely be working “Watermelon Sugar” and “Lights Up” into the setlist, but it remains to be seen if he’ll be taking that watermelon suit out on the road as well.
Source – billboard.com