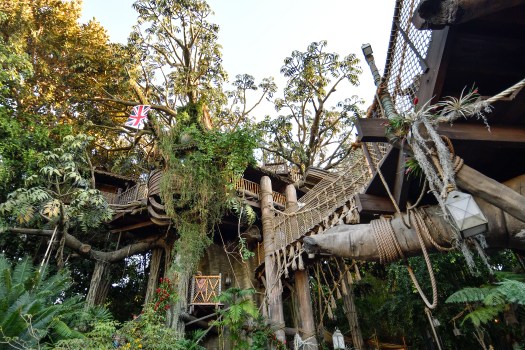 One of the hidden gems of Disneyland is Tarzan’s Treehouse, originally an attraction themed to Swiss Family Robinson. All you do is walk through a very tall treehouse, see some figures from the film, a few show scenes tied to the story of the vine-swinging legend, and that’s that. It’s nice! It’s calm! It…was briefly closed this past weekend because someone caused a wooden slat to fall off a very tall bridge! Though no injuries were reported, this kind of incident is still a bit jarring, and a reminder that even Disneyland attractions are fallible. Next time you think about jumping on that bridge…well, don’t.

Speaking of Adventureland at Disneyland, one of the land’s biggest marquee attractions is preparing to go through a pretty extensive refurbishment in the new year. That would be Indiana Jones Adventure, which celebrates its 25th anniversary at the park next March. The attraction, in which you explore the Forbidden Eye and the horrors and treasures it keeps secret, is one of Disneyland’s best, but even the best attractions need some TLC. Based on the records submitted with the city of Anaheim, Indiana Jones may be getting more than a minor facelift.

Let’s head over to Walt Disney World for our last few stories. Over at Disney’s Hollywood Studios, some eagle-eyed park fans have noticed some odd doings afoot. Specifically, it appears that Disney Imagineers are building a totally new structure that may be tied to the upcoming opening of Rise of the Resistance over at Star Wars: Galaxy’s Edge. A lot is still unknown about the new attraction, except that it’s sure to be a very busy affair with plenty of crowds. The box highlighted in the photo at the link may well be a backstage building for Cast Members, or something entirely different. We’ll find out soon enough, with the ride opening in a few weeks. Moving onto Epcot, I wanted to highlight something here that might not be the first thing you think of when you think of a Disney theme park: art. Specifically, an art gallery that’s opening in the Morocco pavilion at World Showcase. More accurately, the Gallery of Arts and History is re-opening with a new exhibit called “Race Against the Sun”, wherein you can learn more about the detailed history of the Berbers, the people who lived centuries ago in the Sahara. World Showcase has become full of intellectual property, but galleries like these are its secret surprises — there’s plenty of fascinating culture to soak in if you know where to look. For our last story, we’ll stop off at another one of the parks in the Walt Disney World Resort, Disney’s Animal Kingdom. The holiday season is in full swing there as well as the rest of the resort, with some exciting new projections, decor and more for you to discover on your holiday trips. Speaking of culture, you can experience the holiday celebration of Diwali in the Asia section of Animal Kingdom, and see how African culture fuses its own holiday traditions with Western-style celebrations in that area as well. Yes, you can also experience some holiday fun in Pandora, but really, you can use this time to both educate and entertain yourself about how the holidays are experienced outside of the Americas. And you can still have fun!

See Also :  ‘His Dark Materials’ Dramatically Expands Its World(s) With “The Idea of the North”