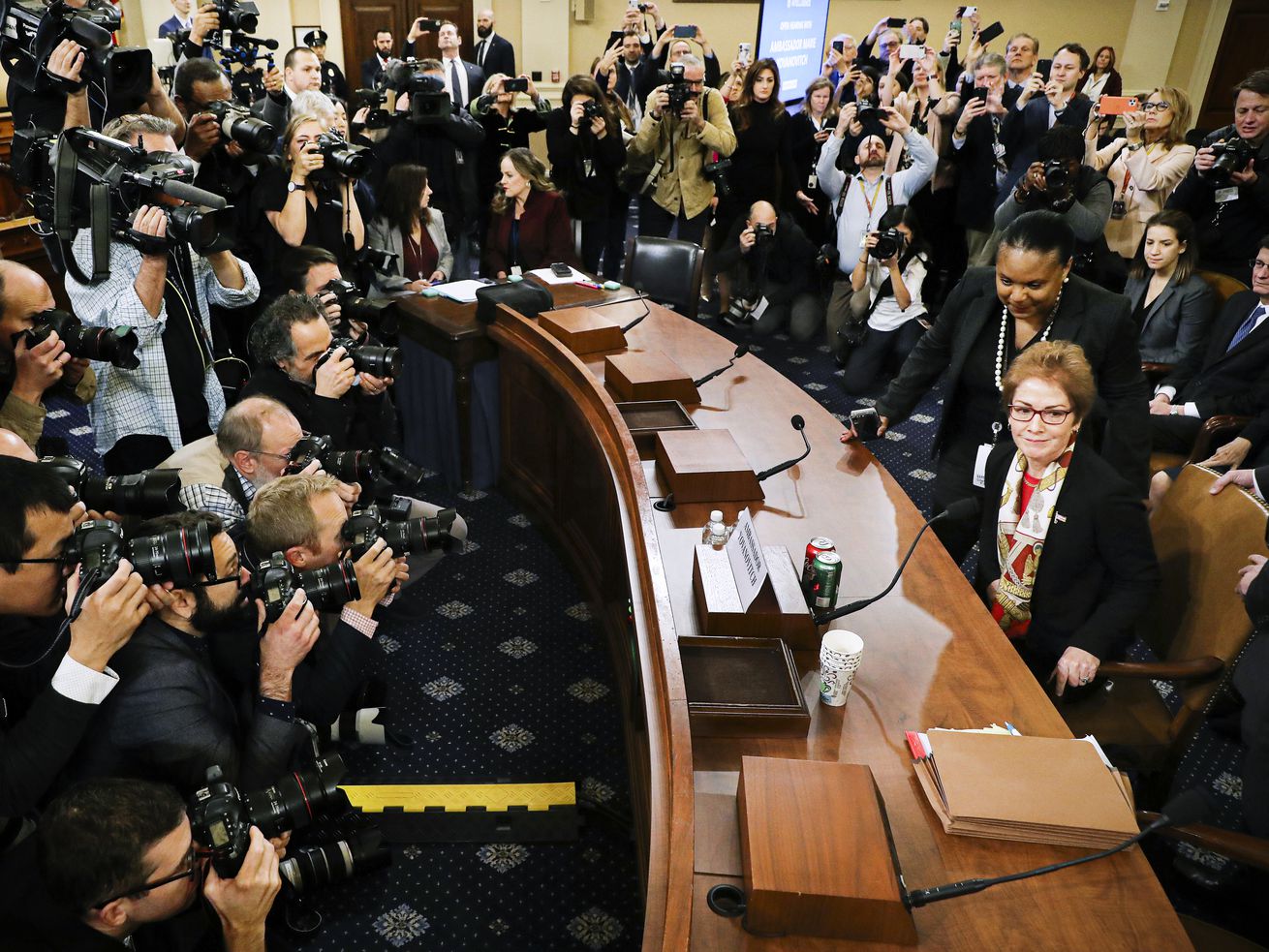 Former US Ambassador to Ukraine Marie Yovanovitch arrives to testify before the House Intelligence Committee on November 15, 2019. | Chip Somodevilla/Getty Images

One takeaway includes a dramatic, real-time attack by President Trump.

The most dramatic moment of former US Ambassador to Ukraine Marie Yovanovitch’s appearance before the House impeachment inquiry on Friday actually happened outside the Congressional chamber.

But while that episode may have had the most pizzazz, it wasn’t the only important thing that happened during the hearing. If you weren’t able to watch all of it, don’t worry — we’ve got you covered. Here are the four key takeaways from the hearing that you need to know.

1. A dramatic attack from Trump in real-time

The biggest development at the hearing was an unscripted intervention from the president himself — one that spurred Democratic cries of witness intimidation.

But about an hour after the hearing began, Trump couldn’t stop himself from weighing in:

….They call it “serving at the pleasure of the President.” The U.S. now has a very strong and powerful foreign policy, much different than proceeding administrations. It is called, quite simply, America First! With all of that, however, I have done FAR more for Ukraine than O.

In the tweet itself, Trump (absurdly) suggested that Yovanovitch — who was posted to the US Embassy in Mogadishu, Somalia, in 1986 as a young foreign service officer — is to blame for the violence that unfolded in the country in the late 1980s and early 1990s.

He also mentioned how Ukrainian President Volodymyr Zelensky “spoke unfavorably” about her during his July 25 phone call with Trump — which is true, though it may have just been an attempt to win Trump’s favor by agreeing with him, as Trump is the one who brought her up, not Zelensky.

Trump also noted that “it is a U.S. President’s absolute right to appoint ambassadors.” That is true: As Yovanovitch herself affirmed numerous times over the course of her testimony, US ambassadors serve at the pleasure of the president.

But it can also be newsworthy if the president removes an ambassador because he’s been duped by a campaign of lies being pushed by corrupt foreign officials — which is what Yovanovitch’s defenders (and Yovanovitch herself) believe happened.

In any case, Trump’s tweet provided the opportunity for Democrats to read it out to Yovanovitch for the first time on live television — and to ask for her response.

Asked by Schiff about Trump’s claim that everywhere she went “turned bad,” Yovanovitch said, “I don’t think I have such power,” adding that she thinks she and her colleagues have “demonstrably made things better.”

Schiff followed up: “The president in real-time is attacking you. What effect do you think that has on other witnesses’ willingness to come forward and expose wrongdoing?”

“Some of us here take witness intimidation very, very seriously,” Schiff said in response — apparently alluding to the possibility that Trump’s behavior could be mentioned in a future article of impeachment.

2. Yovanovitch laid out her narrative of how the smear campaign against her went down

As Yovanovitch herself pointed out in her opening statement, she was no longer in her post by the time the key events Democrats are investigating actually took place — namely, Trump’s alleged efforts to pressure Zelensky by withholding a White House meeting and eventually military aid.

Instead, her fate is a prologue of sorts to that saga. As the US ambassador to Ukraine, Yovanovitch was highly respected among her colleagues. But she ran afoul of two powerful people: Trump’s personal lawyer Rudy Giuliani and Ukraine’s prosecutor general (under the country’s previous administration) Yuri Lutsenko.

Lutsenko began spreading what Yovanovitch says was a completely fabricated story about her: that she gave him a list of people she didn’t want him to prosecute. (Lutsenko has since recanted that story.) Rumors also spread that Yovanovitch was a Trump critic who was bad-mouthing the president in private. The purpose of these rumors seems to have been to push her out of the ambassadorship.

Soon, top Trump allies like Giuliani and Fox News talk-show host Sean Hannity were openly attacking Yovanovitch. The president’s son Don Jr. also tweeted an article about calls to remove her, writing that the US needs “less of these jokers as ambassadors.” (Asked about that, Yovanovitch said that she’d believed at the time that “if the president’s son is saying this” it “would be very hard to continue in my position and have authority in Ukraine.”)

Then, in late April — just three days after Zelensky won the election — Yovanovitch got a call from a State Department official who told her to leave Ukraine on the next plane. The deputy secretary of state later explained to her that Trump had decided Yovanovitch had to go — and the haste was due to fear Trump would attack her in a public tweet.

So Yovanovitch was out. But when Trump spoke to Zelensky during their now-infamous phone call on July 25, her name came up.

“The former ambassador from the United States, the woman, was bad news, and the people she was dealing with in the Ukraine were bad news, so I just wanted to let you know that,” Trump said, according to a reconstructed call readout released by the White House. Later, he added: “Well, she’s going to go through some things.”

Yovanovitch testified that she didn’t learn what Trump had said about her until September, when the White House released the call summary document publicly. But, she said, she was “shocked,” “appalled,” and “devastated” to learn what he’d said about her on that call.

The point of all of this, it seems, was to push out Yovanovitch because she wouldn’t have been helpful to Giuliani’s machinations. And once she was gone, the plot to pressure Zelensky’s administration could proceed in earnest.

3. Yovanovitch says Trump and his allies’ actions may have actually encouraged corruption in Ukraine, not helped curb it

Trump and his Republican allies insist that Trump’s interest in having Ukraine investigate Burisma and the Bidens had nothing to do with improving his own personal political fortunes, but rather was a virtuous campaign to address endemic corruption in the country.

But Yovanovitch tore a giant hole in that line of defense when she assessed that these actions may have actually made its corruption problem worse.

That stunning comment came under questioning from Rep. Danny Heck (D-WA). “What does this mean to Ukraine when the US engages in this kind of behavior?” he asked. “What does that mean to them and their struggling efforts to become a robust democracy?”

“I think when we engage in questionable activity, that raises a question. It emboldens those who are corrupt who don’t want to see Ukraine become a democracy, free-market economy, a part of Europe,” she replied. “That is not a security interest.”

“I think Ukraine looks to us for the power of our example,” she said.

The GOP members of the committee mostly held back from directly attacking Yovanovitch — perhaps believing that would come off poorly. Instead, they directed their belligerence toward Schiff.

Rep. Elise Stefanik (R-NY) disparaged Schiff’s “duplicity” and “abuse of power.” Rep. Mike Turner (R-OH) requested that a litany of news articles in which Schiff was quoted saying the whistleblower would testify be submitted into the Congressional record. Rep. Jim Jordan (R-OH) told Schiff that the GOP’s indulgence of him ran out “a long time ago.”

When questioning Yovanovitch, though, the GOP members tended to emphasize their respect for her service to the country — and to attempt to make implications that they thought would be helpful to Trump, rather than to outright attack her.

For instance, they stressed her lack of knowledge about the key events at the heart of the inquiry, which unfolded after her departure. And they hammered the point that, as president, Trump was within his rights to have her removed from her post.

Yovanovitch said that was entirely true — that “the president has the right to withdraw an ambassador at any time, for any reason.” But, she added, “What I do wonder is why it was necessary to smear my reputation falsely.”

WATCH: “I obviously don’t dispute that the president has the right to withdraw an ambassador at any time, for any reason,” Marie Yovanovitch says. “But, what I do wonder is why it was necessary to smear my reputation falsely.” #ImpeachmentPBS pic.twitter.com/pW6mgbWij5