The mayor of Venice is poised to declare a state of emergency after the city was hit by the highest tide in more than 50 years, with another surge expected to cause further widespread flooding and destruction on Wednesday.
Flooding in the lagoon city reached its second-highest level ever in the wake of the aqua alta, or high waters, which reached 1.87 metres late on Tuesday night amid heavy rain, just short of the record 1.94 metres (78 in) recorded in 1966. 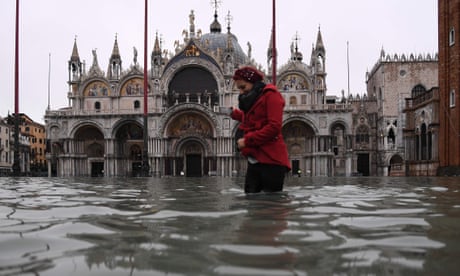 Flooding in Venice – in pictures

An elderly local man from Pellestrina, one of the many islands in the Venetian lagoon, died when he was struck by lightning while using an electric water pump, the fire brigade said. The body of another man was found in his home.
More than 85% of Venice was flooded, authorities said, including the historic basilica and many of its squares and alleyways. While the water level dropped slightly on Wednesday morning, a further torrent of water, whipped up by high winds, is forecast to sweep in later in the day, reaching a level of 1.60 metres.

The mayor of Venice, Luigi Brugnaro, said he would declare a state of emergency, adding that the flood levels represented “a wound that will leave indelible signs”. Saying the cost of the damage would be “very high”, he tweeted: “We ask the government to help us. This is the result of climate change.”
St Mark’s Square was submerged by more than one metre of water, while the adjacent St Mark’s Basilica was flooded for the sixth time in 1,200 years – but the fourth in the last two decades. The last occasion, in November 2018, caused an estimated €2.2m (£1.9m) of damage
The governor of the Veneto region, Luca Zaia, described a scene of “apocalyptic devastation”, saying the city was “on its knees … The art, the basilica, the shops and the homes, a disaster … Venice is bracing itself for the next high tide,” he said on TV. 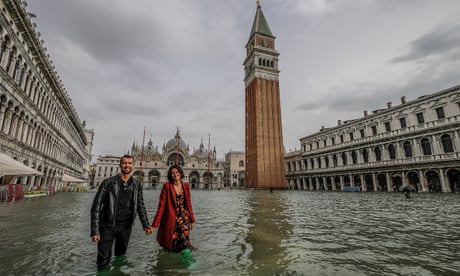 The death of Venice? City’s battles with tourism and flooding reach crisis level

Brugnaro also pledged that the multibillion-euro Mose project, designed in 1984 to protect Venice from high tides but still not in operation, would be completed. Work began in 2003 but has been dogged by delays and myriad issues, including a corruption scandal that emerged in 2014.
The head of the Venice hotels association said the damage was enormous, with many hotels losing electricity and lacking pumps to remove water. Tourists with ground floor rooms were had to be evacuated to higher floors as the waters rose on Tuesday night, Claudio Scarpa told the Ansa press agency.

The coastguard laid on extra boats to serve as water ambulances. Tables and chairs set out for aperitifs bobbed along flooded alleyways in the dark, as locals and tourists alike waved aloft umbrellas, the water slopping over the top of even the highest waders and wellies.
Water taxis attempting to drop people off at the historic hotels along the Grand Canal discovered the gangways had been washed away, and had to help passengers clamber through windows.
At the sumptuous Gritti Palace, which has played host to royals and celebrities over the decades, including Ernest Hemingway, Elizabeth Taylor and Richard Burton, the bar was largely underwater. Rich tapestries were piled on to tables, while the waters lapped around velvet sofas and leather-bound books.

Two French tourists caught out said they had “effectively swum” after some of the wooden platforms placed around the city in areas prone to flooding overturned.
The overnight surge also triggered several fires, including one at the International Gallery of Modern Art Ca’ Pesaro. Video on social media showed deep water flowing like a river along one of Venice’s main thoroughfares.
Other footage showed large waves hammering boats moored alongside the Doge’s Palace and surging over the stone sidewalks. Much of Italy has been pummelled by torrential rains in recent days, with widespread flooding, especially in the southern heel and toe of the country.
Further bad weather is forecast for the coming days

As the climate crisis escalates…

… the Guardian will not stay quiet. This is our pledge: we will continue to give global heating, wildlife extinction and pollution the urgent attention and prominence they demand. The Guardian recognises the climate emergency as the defining issue of our times.
We made a choice: to keep Guardian journalism open to all. We do not have a paywall because we believe everyone deserves access to factual information, regardless of where they live or what they can afford.
Our independence means we are free to investigate and challenge inaction by those in power. We will inform our readers about threats to the environment based on scientific facts, not driven by commercial or political interests. And we have made several important changes to our style guide to ensure the language we use accurately reflects the environmental catastrophe.
The Guardian believes that the problems we face on the climate crisis are systemic and that fundamental societal change is needed. We will keep reporting on the efforts of individuals and communities around the world who are fearlessly taking a stand for future generations and the preservation of human life on earth. We want their stories to inspire hope. We will also report back on our own progress as an organisation, as we take important steps to address our impact on the environment.
Source – theguardian.com