MEXICO has made multiple arrests in connection with last week’s massacre of a family of nine Mormons in the north of the country.

Three women and six children were shot dead and burned by suspected cartel gunmen on a remote road in the state of Sonora.

“There have been arrests, but it’s not up to us to give information,” Security Minister Alfonso Durazo told reporters in Mexico City on Monday night.

He said prosecutors in the region – as well as at the federal level – were now in charge of the high-profile investigation.

Mexico’s government has said it believes the victims were caught in the midst of a territorial dispute between an arm of the powerful Sinaloa Cartel and the rival Juarez Cartel.

On Sunday, Mexico’s government said it had asked the FBI to participate in the investigation into the killings.

Several of those slaughtered in the suspected Mexican cartel hit were shot at point-blank range by their ruthless killers, it’s been revealed.

Shocked investigators have learned the victims – all Mormons – were systematically gunned down after being hauled out of their vehicles.

And one American federal investigator has now told the New York Post that some of the evidence gathered after the bloodshed may have already been compromised.

Christina Langford Johnson was shot while shielding her baby daughter[/caption]

“They were taken out of their cars and shot,” the unnamed investigator said.

“It’s kind of disturbing that the FBI has had no access to the crime scene, which is probably a disaster already because the Mexicans have allowed families to remove the bodies.

“Any evidence that could have been gathered is probably destroyed.”

A Mexican investigator added the gunmen “shot some of the victims at point-blank range.”

The shocking revelations come as it emerged many of the Mormons who re-settled in Mexico are now fleeing the country in the wake of the killings.

More than 100 members of the tight-knit US religious community are heading north to Arizona in an 18-vehicle convoy.

Many more expected to leave the land their ancestors settled in nearly 70 years ago in the wake of the horrific gun ambush on the LeBaron Mormon family.

Bryce Langford, whose mother was one of those killed, said the community had become increasingly wary of cartel gunmen prowling near their isolated ranches.

And after Monday’s sickening attack, they decided they had to leave Mexico for their own safety, he told the Arizona Daily Star.

“The assets that they’ve acquired down there are tremendous,” Mr Langford.

“And to have to up and leave from one day to the next and leave all that behind, there’s definitely a lot of sad people here.”

Leah Langford-Staddon said her mother and sister were headed to join her in Arizona with as many belongings as they could pack into their vehicles.

“They spent the whole day yesterday packing. It was frantic,” she recalled. “When it comes down to it, it’s just things that can be replaced.”

The sickening massacre shone a global spotlight on a fragile community blighted by decades of tragedy.

In a “targeted” hit that has seen a rival of El Chapo arrested, three vehicles belonging to two families were ravaged with bullets on their way to a wedding in Sonora

It was later reported babies were left to burn alive and kids were shot in the back.

Among those killed was Christina Langford Johnson, 31, who was shot in the heart while bravely shielding her seven-month-old girl.

Her funeral was held on Saturday at a moving ceremony attended by dozens of members of the Mormon community. 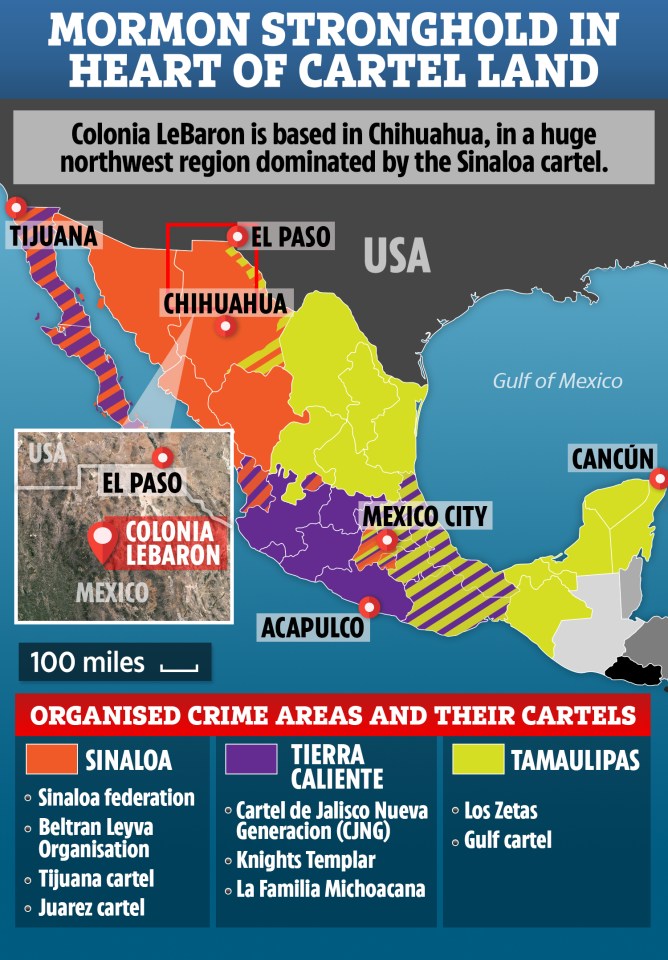 It is understood the convoy was attacked by members of the Juarez drug cartel – currently contesting the border region because it is key to smuggling drugs into the US.

While police are yet to pin down the hitmens’ exact motives, the grisly scene is just the latest chapter in a long, brutal feud between the two very different groups plagued by kidnappings and brutal executions.

The LeBarons – a polygamous community where men take multiple wives –  were first caught in the cartels’ dangerous web in 2009.

The family’s large houses and nice cars attracted the attention of organised criminal syndicates looking to fill their coffers.

It was here that on May 2 16-year-old Eric LeBaron was seized by five armed men as he worked on the family’s Sierra Madre ranch.

The shameless kidnappers called three times to ask for $1million dollars in ransom – refusing to negotiate.

Benjamin LeBaron, who led the campaign to free Eric, had become an outspoken critic of the cartels.

He set up a group, SOS Chihuahua, which helped citizens protect themselves from organised crime – but his actions didn’t go unnoticed.

Boy, 15, found dead in bed after 'drugs and booze binge with his MUM'

Dad calls for lollipops to be BANNED after son, 5, almost choked to death

Girl, 10, 'eight months pregnant after being raped by 15-year-old brother’

Dad, 32, left paralysed with half a skull and 'sunken' brain after brutal attack

Two months after the first ransom attempt, pickup trucks filled with up to 20 cartel members– heavily armed and dressed as police officers – arrived outside his house.

As Benjamin’s children screamed inside, cartel members smashed through windows, seizing him and his brother-in-law Luis Widmar.

Driving them to the outskirts of the town, the cartel heavily beat the pair before executing them with shots to the back of the head.