A SEVEN-month-old girl has been found alive after her hero mom appeared to have shielded her from a drug cartel’s massacre.

Baby Faith may only be alive today because of her parent Christina Langford Johnson’s final act to hide her car seat on the floor when she heard gunshots.

Her family claim that she got out of her car and waved her arms at the gunmen to indicate that she was no threat in Sonora, Mexico, on Tuesday.

Christina’s bullet-ridden body was discovered 15 yards away from her SUV, which has led many to believe she trying to distract them.

The child was shown to be unharmed and strapped into her car seat eight hours after the massacre in released footage, the DailyMail reported.

She has since been reunited with her grieving father Tyler Johnson, who was pictured smiling as he cuddled his daughter at their home.

On Wednesday, one of the suspected gunman was arrested by Mexican authorities who found him with gagged hostages.

The man, who has only been identified as Leonardo, 30, was detained in Agua Prieta, near the Arizona border, and supposedly belonged to the Juarez cartel.

He was discovered inside a white bulletproof vehicle with three women and four assault rifles.

The developments came amid a massive manhunt for the killers of six children and three women of the Mormon faith.

The gut-wrenching and “terribly sickening” attacks saw victims burned alive and raped, while others were shot, according to family member Willie Jessop.

A convoy carrying members of the reclusive sect were believed to have been ambushed by a drug cartel while on the way to a wedding.

Eight young children, including several babies, survived the attack by hiding in the bushes.

Five of the most injured kids were transported to hospital in Arizona for treatment – heartbreaking footage showed one baby who had been caught in the crossfire.

They belonged to a Mormon family who were part of a secretive community with ties to a notorious sex-cult and a polygamous “Mormon Manson”.

This is the time for Mexico, with the help of the United States, to wage WAR on the drug cartels and wipe them off the face of the earth.

The FBI has offered help to the Mexican government to pursue the attackers, hours after President Andres Manuel Lopez Obrador rejected the help of US President Donald Trump.

In a tweet, Trump vowed to “wage war” on the country’s drug cartels in response to the brutal slayings.

He wrote: “The great new President of Mexico has made this a big issue, but the cartels have become so large and powerful that you sometimes need an army to defeat an army.

“This is the time for Mexico, with the help of the United States, to wage WAR on the drug cartels and wipe them off the face of the earth.”

most read in world news

NO WILL TO LIVE

Girl, 17, ‘gang-raped to death by 4 teens who left her with horrific injuries'

While Obrador thanked Trump, he declined the help, saying: “We declared war, and it didn’t work.”

This referred to the previous failed policies of previous administrations. “That is not an option,” he added. 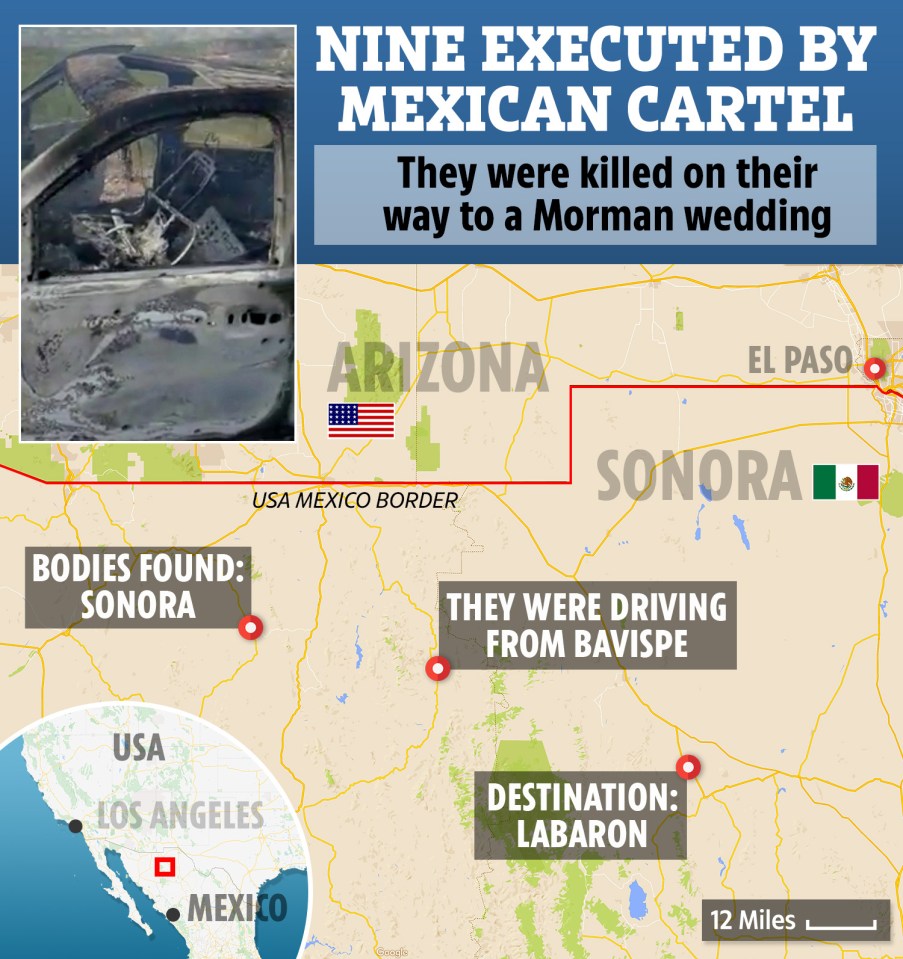 A baby’s car seats was also spattered with blood[/caption]