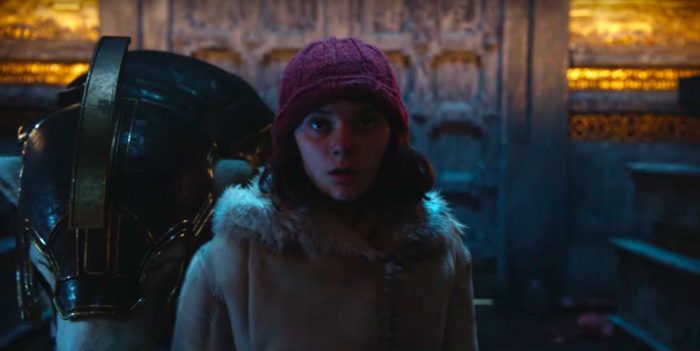 His Dark Materials got off to a strong, albeit imperfect, start last night, dropping viewers right into the alternate world where human souls take on the form of animals and James McAvoy is a bad uncle. While the first episode was comprised of a lot of Dafne Keen‘s bull-headed protagonist Lyra Belacqua running on rooftops and foreshadowing things to come, the rest of the first season of His Dark Materials looks to be packed with plot and action.

His Dark Materials’ first episode may have been a (somewhat confusing) slow-burner, but the episodes that follow will burn through the plot fast, if the season trailer is anything to go by. While I confess I go into the show with extreme anticipation because of my love for Pullman’s books, which may have inoculated me to some of the more confusing narrative choices of the first episode, this trailer feels to me like it will appeal to both newcomers and old fans.

But if the overarching story isn’t any clearer (don’t worry, it’s not in the book either), at least you can be excited for the hints at armored bears, religious wars, and Ruth Wilson tearing through the scenery of this show. We only got a glimpse of her charming villain in the first episode, but this trailer doubles down on the chilling ferocity and savagery of Wilson’s Mrs. Coulter. Of course, let’s not forget the first appearance of Lin-Manuel Miranda as Lee Scoresby, a swaggering aeronaut who, as I said in my review, injects a dose of much-needed comic relief as the story takes a turn for the dark. And yes, he does sing.

See How Hollywood Is Spreading the Love this Valentine's Day

His Dark Materials airs Mondays at 9 p.m. ET on HBO.

His Dark Materials stars Dafne Keen, James McAvoy, Ruth Wilson and Lin-Manuel Miranda. Adapting Philip Pullman’s award-winning trilogy of the same name, which is considered a modern masterpiece of imaginative fiction, the first season follows Lyra, a seemingly ordinary but brave young woman from another world. Her search for a kidnapped friend uncovers a sinister plot involving stolen children, and becomes a quest to understand a mysterious phenomenon called Dust. As she journeys through the worlds, including our own, Lyra meets Will, a determined and courageous boy. Together, they encounter extraordinary beings and dangerous secrets, with the fate of both the living?—?and the dead?—?in their hands.