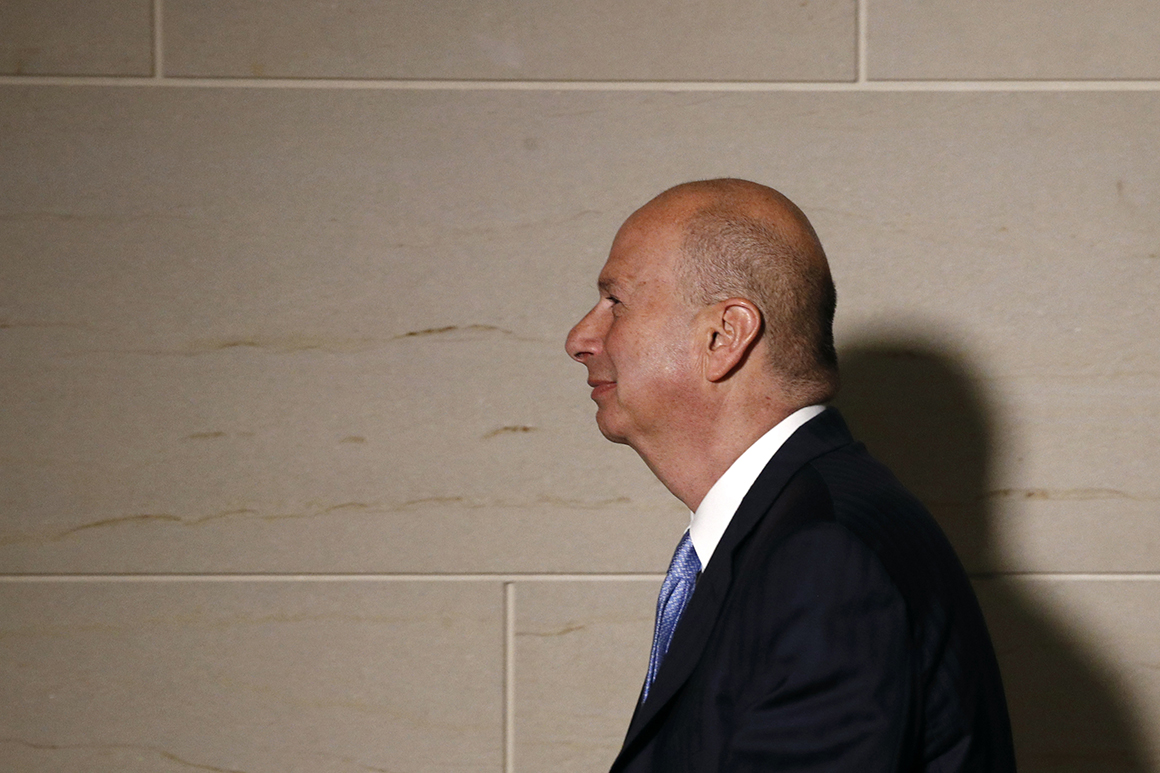 Gordon Sondland, a key witness in the impeachment inquiry, revealed that he told a top Ukrainian official that hundreds of millions of dollars in military aid would “likely” be held up unless the country’s government announced investigations into President Donald Trump’s political rivals — a major reversal from his previous closed-door testimony.

The acknowledgment of a quid pro quo is an explosive shift that threatens to upend claims by the president’s allies that military aid was not used as a bludgeon to advance his domestic political interests.

In his revised testimony, released Tuesday by House impeachment investigators, Sondland said that during a Sept. 1 meeting in Warsaw, Ukrainian President Volodymyr Zelensky raised his concerns directly to Vice President Mike Pence about the suspension of military aid.

Sondland, Trump’s ambassador to the European Union, added that he later told Andriy Yermak, a top Ukrainian national security adviser, that the aid would be contingent on Trump’s desired investigations.

“After that large meeting, I now recall speaking individually with Mr. Yermak, where I said that resumption of U.S. aid would likely not occur until Ukraine provided the public anti-corruption statement that we had been discussing for many weeks,” Sondland wrote in his addendum, which was released on Tuesday alongside a nearly 400-page transcript of his testimony.

Sondland revealed the exchange in supplemental testimony he submitted to House impeachment investigators on Monday, saying he had failed to recall the episode when he testified in person last month. Sondland, who had a direct line to Trump and was a major donor to his 2016 presidential campaign, had previously indicated he was not aware of any effort to connect military aid to Trump’s demand for politically motivated investigations.

Sondland was eager to maintain that public posture, even with other U.S. officials working on Ukraine policy.

“I said that resumption of U.S. aid would likely not occur until Ukraine provided the public anti-corruption statement that we had been discussing for many weeks.”

Evil stepmother jailed for savagely beating up stepson, 6, leaving him with black eyes and horrible injuries

The transcripts released Tuesday — which included that of former U.S. special envoy Kurt Volker — paint a picture of an American president whose deep-rooted hostility toward Ukraine was evident in private conversations, including his belief that the country “tried to take me down,” in reference to a debunked conspiracy theory about the country’s involvement in the 2016 election. Trump appeared to view the election of a new Ukrainian president as an opportunity to extract political benefits.

Trump’s allies initially believed Sondland would provide exculpatory evidence to boost the president’s case, but subsequent witnesses had contradicted many of Sondland’s claims — and Democratic lawmakers even questioned whether he had perjured himself, likely prompting Sondland’s addendum.

The nearly 400-page transcript of Sondland’s Oct. 17 testimony underscores the power and influence Rudy Giuliani had over U.S. dealings with Ukraine.

Giuliani, the president’s personal lawyer, was establishing contacts on the ground in Ukraine — including with the former top prosecutor whom U.S. officials believed was not credible — and conducting what several witnesses for the impeachment inquiry described as a shadow diplomatic effort that ran counter to U.S. goals and interests.

Sondland, for his part, said in his opening statement to impeachment investigators that he was “disappointed” Trump had directed him to involve Giuliani, but said he reluctantly agreed because the former New York City mayor was “the key to changing the president’s mind on Ukraine.”

In fact, according to the full transcript of Sondland’s testimony released Tuesday, the ambassador said he “assumed” that Giuliani’s efforts to pressure Ukraine to investigate former Vice President Joe Biden was illegal.

At least one senior official told Giuliani that he believed the allegations against Biden and his son Hunter — which form the basis of Trump’s overtures to Kyiv — were false. According to the transcript of his Oct. 3 testimony, Volker dismissed the idea that Biden pushed for the removal of a Ukrainian prosecutor in order to help his son.

Everywhere basic income has been tried, in one map

“I said to Rudy in that breakfast the first time we sat down to talk that it is simply not credible to me that Joe Biden would be influenced in his duties as vice president by money or things for his son or anything like that,” Volker said. “I’ve known him a long time. He’s a person of integrity, and that’s not credible.”

In his supplemental testimony, Sondland said he initially believed the public declarations for new investigations could be made by Ukraine’s top prosecutor, but said he later “came to understand that, in fact, the public statement would need to come directly from President Zelensky himself.”

Just three days before Sondland’s conversation with Yermak in Warsaw, on August 28, POLITICO first revealed that the military aid had been frozen.

The transcripts released by impeachment investigators on Tuesday were accompanied by a tranche of text messages chronicling communications among Sondland and two other senior diplomats involved in the Ukraine controversy — Volker and William Taylor.

In one exchange, Volker sent Yermak the precise language that the U.S. wanted Zelensky to use when he announced Trump’s preferred investigations.

“Special attention should be paid to the problem of interference in the political processes of the United States, especially with the alleged involvement of some Ukrainian politicians,” Zelensky was to say. “I want to declare that this is unacceptable. We intend to initiate and complete a transparent and unbiased investigation of all available facts and episodes, including those involving Burisma and the 2016 U.S. elections, which in turn will prevent the recurrence of this problem in the future.”

Sondland said he “always believed that suspending aid to Ukraine was ill-advised,” and although he claims he did not know why the military assistance was initially suspended, Sondland said he later “presumed” that the aid “had become linked to the proposed anti-corruption statement.”

House Democrats launched the impeachment inquiry in late September after learning that a whistleblower had raised concerns about Trump’s posture toward Ukraine and, specifically, toward Zelensky during a July 25 phone call with his Ukrainian counterpart.

Mystery of the ‘Aussie Madeleine McCann’, 3, who vanished in broad daylight in 2014 as police begin fresh search

The inquiry centers on whether Trump abused the power of the presidency to pressure the Ukrainians to investigate his political rivals based on spurious charges. Investigators are also looking into the extent to which military aid and a White House meeting with Zelensky were used as leverage to bend the country to Trump’s will.

Democrats appeared to zero in on the circumstances surrounding Sondland’s testimony — and whether White House officials attempted to interfere. It’s a signal that even as they search for evidence of Trump’s alleged abuse of power, they’re also compiling evidence for a potential article of impeachment on obstruction of Congress.

Sondland revealed that after he was summoned to testify to Congress, he bumped into Trump at the White House and informed him of his plan to speak to lawmakers. He said Trump simply responded “good, go tell the truth.”

Sondland also said he spoke several times with Energy Secretary Rick Perry, including on the day before his initial congressional testimony, to “refresh my memory about a couple of meetings.” When investigators asked him whether he was aware it could look like he was trying to coordinate his story, Sondland repeated, “I wanted to refresh my memory.”

The White House responded to Tuesday’s revelations without addressing Sondland’s conversation with Yermak. In a statement, White House press secretary Stephanie Grisham said the transcripts “show there is even less evidence for this illegitimate impeachment sham than previously thought.”