TEN Brit tourists are reportedly among 33 injured after a London-bound coach flipped during a horror crash in northern France yesterday.

Four of the victims suffered serious injuries when the FlixBus “tipped over” onto its side in the shocking motorway smash. 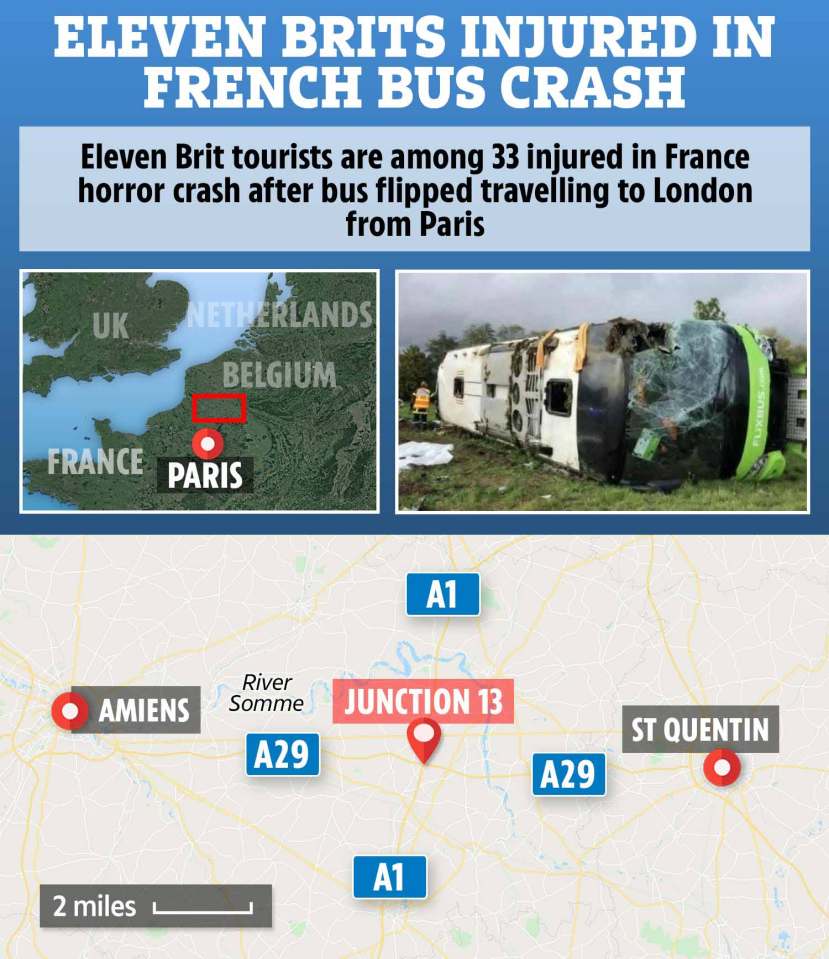 The crash reportedly happened when the vehicle, travelling from Paris to London, hit a safety rail on the busy A1 tourist route between Amiens and Saint-Quentin just before noon.

A source said: “Many of those on board were treated at the scene, while others were taken to hospitals in the area.

“Of the 33 people on board, four are seriously hurt.”

Northern Ireland couple Jamie Kerry and Gemma Given, both 20, were treated in hospital for head and hand injuries.

Eight other Britons were on board.

Police previously said there were 11 Britons on the coach.

According to reports from the scene, firefighters had to cut a hole in the back of the bus to remove trapped passengers.

A spokesman for the Somme prefecture said three of the four “seriously injured” were British, without providing further details.

They added: “The accident happened at Junction 13 of the Al autoroute,’ referring to the motorway that connects Paris and Lille.

Psychological counselling was being offered to all those who had witnessed the worst injuries.

There were 11 people from France, five from the US, two from Romania and one each from Spain, Australia, Mauritius, Japan and Sri Lanka on the coach at the time of the crash.

The driver and all 32 passengers were taken to local hospitals, according to local media.

A picture posted on Twitter by the Somme gendarmerie showed the badly damaged bus lying on its side, with debris scattered around.

It is claimed the bus veered out of its lane on a wet road surface and crashed into the rail before rolling onto its side.

The coach company sent a replacement coach to take passengers to London if they were well enough to continue the journey.

A Foreign Office spokesperson told the Sun Online: “We are in contact with the French authorities following a road traffic accident in France, and will do all we can to assist any British people who need our help.”

A FlixBus spokesman told Mirror Online: “Injured passengers were taken to local hospitals; those not requiring medical attention are being taken care of by local authorities.

“FlixBus is in close contact with the relevant authorities in order to determine the exact cause of the accident and to ensure all passengers receive appropriate support.”

The travel firm is a German company that runs intercity bus service in Europe and the US, working with regional bus companies.

It is the third FlixBus crash this year.

In October, a FlixBus travelling from Barcelona to Bordeaux turned over on the A61 motorway near Bizanet, killing one 21-year-old woman and injuring 17 others.

And in May, a coach travelling from Berlin to Munich veered off an A road in Germany, killing one person.

McDonald's British boss sacked for having relationship with employee

All 74 passengers were thought to be injured in the crash, with nine sustaining life-threatening injuries The Local.De reported at the time.

According to local media, it was thought the driver of the German bus fell asleep at the wheel.

The identities of those involved in the most recent accident have not yet been revealed as local police investigate the crash.