AIRBNB has said it will ban “party houses” after five people were gunned down in a mass shooting at a San Francisco Bay home rented through the company.

CEO Brian Chesky said the company would take steps to “combat unauthorised parties and get rid of abusive host and guest conduct”.

In a tweet Mr Chesky said: “We must do better, and we will. This is unacceptable.”

Three people died at the house, in the city of Orinda, near San Francisco, while two more died later in hospital.

Police found two guns at the house but the shooter is still at large.

Starting today, we are banning “party houses” and we are redoubling our efforts to combat unauthorized parties and get rid of abusive host and guest conduct, including conduct that leads to the terrible events we saw in Orinda. Here is what we are doing:

The house was reportedly booked under a pretence for a small group, before being publicised on Instagram as an “Airbnb Mansion Party”, reports the Mercury News.

Eventually a crowd of more than 100 people flocked to the property although the host did not authorise the party.

The company, which is expected to float on the stock market in 2020, would clamp down users who violated its policies.

According to some initial reports, witnesses saw a man in a hoodie open fire with a machine pistol sparking panic among hundreds of party goers, some of whom jumped from balconies to flee the shooter.

Video from the scene posted by KGO-TV showed multiple patients being loaded into ambulances with others limping away.

The party was being held at an Airbnb house on Lucille Way near Knickerbocker Lane.

Students from nearby Laney College were among those attending, NBC reported.

At about 1o.45 pm local time police were called after gunfire was heard coming from the house.

When police arrived they were overwhelmed by huge surge of party-goers who were fleeing for their lives.

Michael Wang, 58, who owns the home, said he rented it out to a woman through Airbnb for what the woman said would be a family reunion for a dozen people, according to The San Francisco Chronicle. 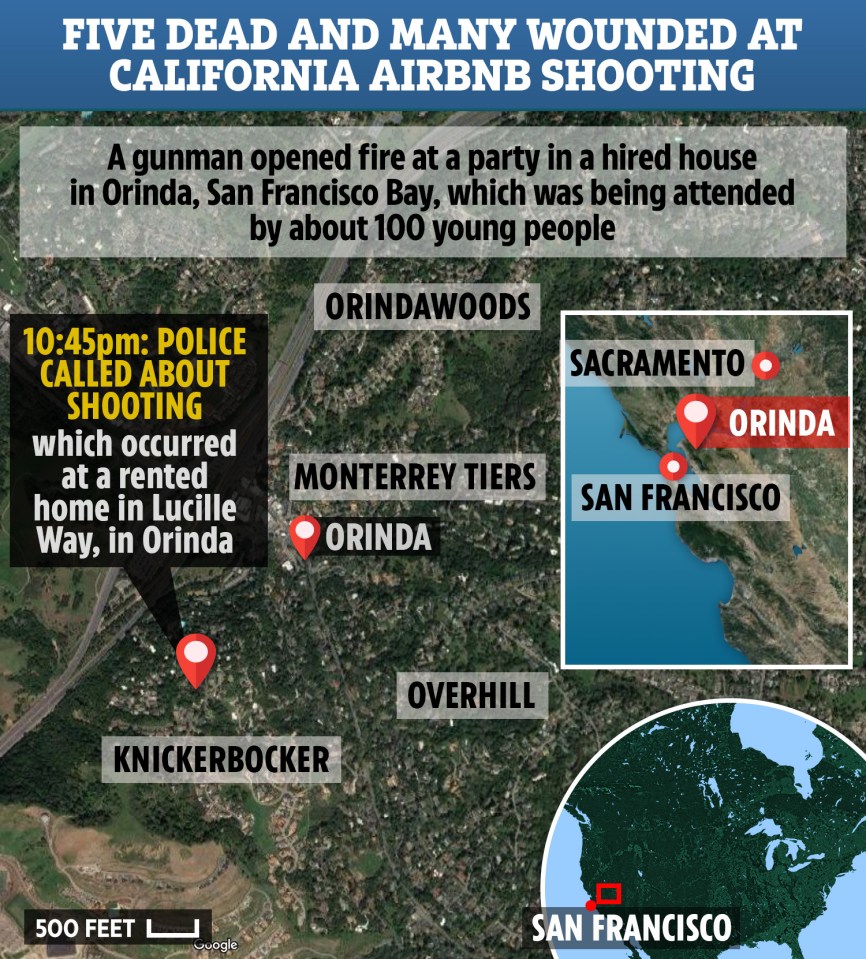 Mr Wang said his wife reached out to the woman hiring their property after neighbours called complaining about excessive noise.

She said there were only 12 people at the party, but he said he could see more people via video from his Ring doorbell camera.

Police did not immediately provide information about the victims or what what prompted the violence at the home in the neighbourhood of multimillion-dollar homes.

Residents of the neighbourhood were frustrated with the party’s noise before the shooting, said neighbour Chris Gade.

“It was just more of a noise complaint that we were worried about originally,” he told reporters.

Then Gade said he heard gunshots and saw people “screaming and fleeing down the hill”.

“I think everybody in our neighbourhood immediately locked our doors and started messaging each other, trying to figure out what was going on,” he said.

“This just doesn’t happen in Orinda.”

Orinda Mayor Inga Miller told KCBS Radio she had not previously heard of any complaints about short-term rentals in the neighbourhood. City officials had regulated the industry with an ordinance and a registry.

“It’s a very sombre day here in Orinda,” she said.

The massacre came two days after three people were fatally shot and nine people were injured in a shooting at a Halloween party in Long Beach, California.

Toddler, 3, died in pool of his vomit 'after being beaten by evil foster mum'

A seven-year-old girl dressed as a bumblebee was shot in the chest last night while trick-or-treating in Chicago.

The girl was collecting candy in Little Village, on the Southwest Side, when at least one person in a group of at least three men began firing at around 5.30pm, reports claim.