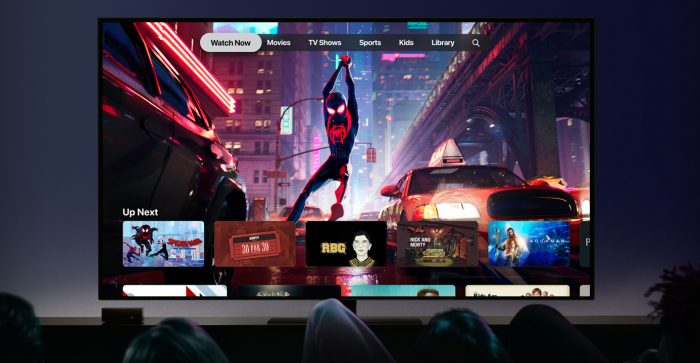 Today brings the seemingly unceremonious launch of Apple TV+, the new streaming service from the tech company who is probably hoping that they didn’t just release the streaming equivalent of the Newton. Apple is hoping to get as many customers as possible to sign up for the service for just $4.99 a month, and AT&T has just made it a little easier for you to make that happen.

If you head to the AT&T online store, you can snag an Apple TV 4K for $90, which is half off the usual $180 price tag. The good news is that you don’t need to be an AT&T customer in any capacity to take advantage of the deal. And even if you’re not thinking of signing up for Apple TV+, this deal is a steal, because the Apple TV is one of the best streaming devices on the market, especially for this price.

Aside from giving you easily access to Apple TV+ on your television (which is only available on Roku, Amazon Fire TV and newer Samsung TVs at launch, the Apple TV 4K allows you to watch movies and TV shows from your iTunes collection on your TV. It also allows for AirPlay from other Apple devices like your iPhone and iPad, and it has Dolby Atmos and Dolby Vision HDR support so you can watch some programming in one of the best formats out there.

The Apple TV 4K also has a hard drive, so you can download on play games right on your TV. And since Apple recently released the Apple Arcade subscription service for games, that’s something that could be very appealing to any gamers or parents with kids who need distracting. Apple even recently introduced the capability to pair a PlayStation4 Dual Shock controller or an Xbox One controller to the Apple TV 4K for much more gaming potential.

But games aren’t the only apps you’ll want to take advantage of, because Apple TV 4K makes it easy for you to download the apps for other streaming services like Netflix, Hulu, Amazon Prime, Criterion Channel, Shudder and many more. Plus, you can also show off your photos, stream music, and so much more.

Usually the price of the Apple TV 4K is a little salty when there are other streaming devices out there which offer almost everything the Apple TV does. But for this discount price, it’s a good time to pick up one of these devices. If anything, it could make a great gift for this holiday season.

You can order the Apple TV 4K at AT&T’s website and have it shipped to your house or pick up at a nearby AT&T store.

The post Get an Apple TV 4K for 50% Off at AT&T, Which Is Useful for Much More Than Just Apple TV+ appeared first on /Film.