THE body of missing British backpacker Amelia Bambridge was today found at sea more than 60 miles from where she disappeared, Cambodian police have said.

Amelia, 21, was last seen leaving a beach party on the tourist island Koh Rong at 3am last Thursday morning. 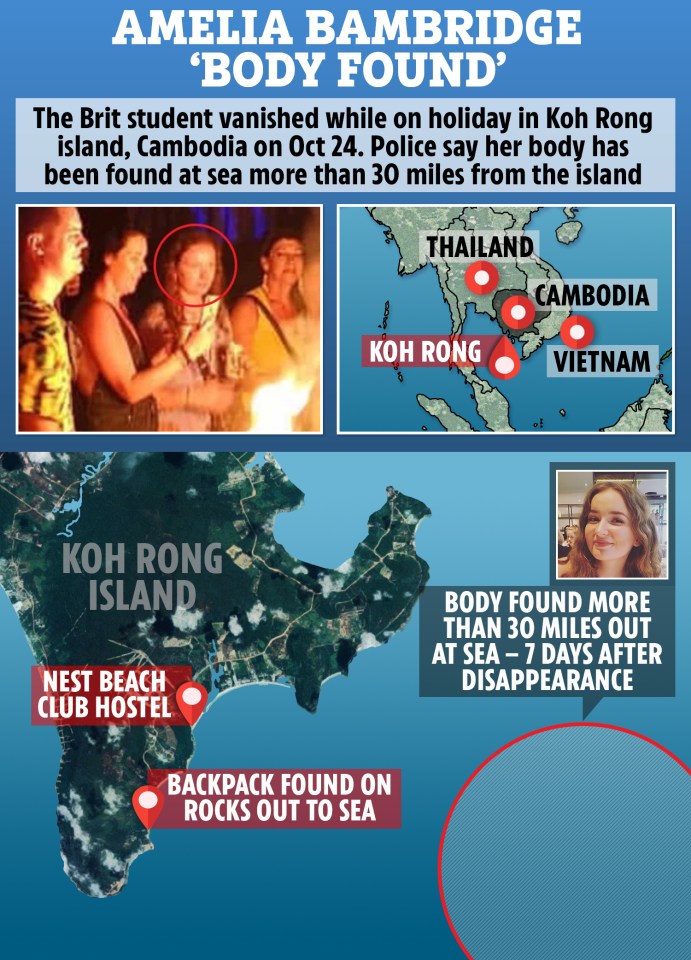 Fishermen discovered her body near the Thai border, around 62 miles away from where she had disappeared last week.

Early indications pointed to drowning as the cause of death, the police chief said today.

Chuon Narin, police chief of the Preah Sihanouk province, said she had been identified by a tattoo on her body and the clothes she was last seen in.

She is now being taken to the Cambodian mainland for an autopsy.

Officials were also checking with local fisherman to see if there were any reports of other missing women who might have been lost at sea.

Authorities found the body floating amid some rocks off Koh Chhlam, an island in neighbouring Koh Kong province.

Amelia, from Worthing, West Sussex, was first reported missing after her rucksack with her purse, phone and bank cards inside was found on a rock in the sea on the morning after the party.

She was due to check out of her hostel at noon on October 25 and planned to leave the island later in the afternoon with a friend, but did not return to pick up her passport.

Her distraught family flew out to join the 150-strong search operation of divers, land-based teams, police drones and volunteers.

Amelia’s family had speculated she could have become lost in the heavy jungle in the island’s interior, but Cambodia officials had openly leaned toward the theory that she drowned in the sea because of where her bag had been found.

See Also :  Girl, 4, dies after being accidentally stabbed through the neck by brother, 14, as he cooked breakfast

Amelia’s mum Linda Schultes, was told of the disappearance by the manager of the Nest Beach Club hostel.

The 52-year-old Tesco worker had previously described her daughter’s disappearance as “very out of character” and had hoped she had got “lost on the way back” from the party.

Speaking on Monday, Phil said he was hoping “for a miracle”, but feared his daughter would not be found.

Tim Loughton, MP for East Worthing and Shoreham, led tributes today, saying: “Devastated to hear the terribly sad news about Amelia Bambridge this morning – the thoughts and prayers of everyone in Worthing are with her family and friends.”

Six men who work at restaurants, hotels and guest houses on the island were questioned by police and released without charge on Tuesday evening.

Officials said the men were taken into custody because of complaints by Western tourists that they had acted badly towards visiting women.

A fundraiser launched by Ms Bambridge’s sister Sharon Schultes to cover the ongoing search had raised more than £16,000 since Friday.

The family launched a separate petition yesterday, claiming the Foreign Office had provided “no support” in their search and left them to run the whole operation themselves.

Amelia had left the UK in September 2019 after completing an apprenticeship. It was her first time travelling on her own.