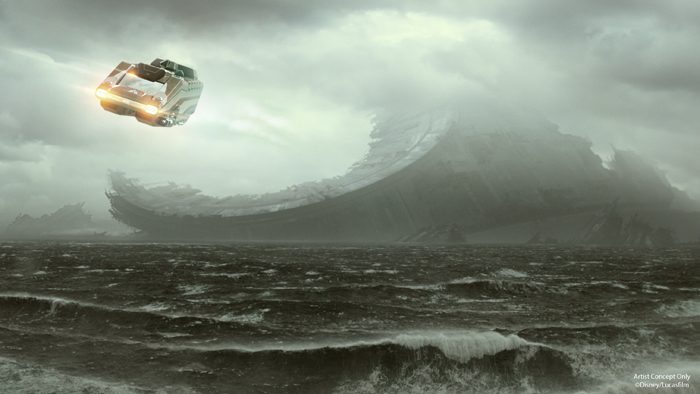 When the second Death Star exploded in Return of the Jedi, where exactly did its remains end up? We know from the Star Wars: The Rise of Skywalker trailers that many of that film’s characters are going to visit the burned-out husk of that mega weapon, but are they going to an unseen section of a familiar planet or uncharted territory? An impending update to a Disney attraction has provided the answer.

Disney’s Star Tours: The Adventures Continue is getting an upgrade on the same day that The Rise of Skywalker hits theaters, and a new announcement reveals the name of the ocean moon where the Death Star remains crashed. Get the details below.

Last month, a rumor began circulating which indicated that a location from The Rise of Skywalker would be appearing in the Star Tours ride. That was pretty much a given, considering that the ride has added new locations from the movies for the past two entries in the Skywalker saga, and there was no way they were going to let a monumental occasion like the final film in the saga go by without including something from it in the attraction.

In the trailers for Star Wars: The Rise of Skywalker, you caught glimpses of the ocean moon Kef Bir. All I can say at this point is that Starspeeders [the Star Tour ride vehicles] will be heading there soon! We’ll be sharing more details in the future, but for now I just wanted to say how super-excited we are that Star Tours – The Adventures Continue is continuing to live up to its name. As C-3PO would say, “Here we go again!”

According to the canonical reference book Ultimate Star Wars, New Edition (via Wookieepedia), Kef Bir is the homeworld of Jannah, the new character played in The Rise of Skywalker by Naomie Ackie. We still don’t know much about her character aside from the fact that she’s a skilled warrior and rider of animals, so there must be enough sections of this moon that aren’t covered in water where Jannah could have trained and learned how to ride on land. Technically, this new announcement doesn’t specifically say that Star Tours guests will be flying past the remains of the Death Star, but that kinda seems like a given, doesn’t it?

It’s also worth noting that the official statement says “Star Tours – The Adventures Continue will be adding new destinations inspired by the latest episode of the Star Wars saga,” meaning that Kef Bir won’t be the only location we visit from that film. So stay tuned for more on that front.

In 2015, Star Tours added footage of the desert planet of Jakku from Star Wars: The Force Awakens around a month before the film arrived in theaters, and a similar thing happened two years later with footage from the salt mining planet of Crait from Star Wars: The Last Jedi – that footage also debuted on the ride just before the movie opened. But the DisneyParks blog says that the newest addition will take effect on December 20, 2019, the same day The Rise of Skywalker opens in theaters.

The post New ‘Star Tours’ Update Will Take Us to Death Star Remains, Reveals Name of Planet Where It Crashed appeared first on /Film.