If you’ve ever thrust your wrist forward while pretending to shoot a web from it, Disney’s upcoming Spider-Man ride is going to try to give riders that sensation courtesy of some new technology. We’ve known for a long time that a new ride was in the works, but thanks to a recent panel at New York Comic Con, a couple of Imagineering executives revealed that it will give each guest the feeling of having Spider-Man’s web-shooters on their wrists as they try to wrangle some Spider-bots that have gotten out of control.

Marvel.com posted a video of the recent NYCC panel, where Scot Drake, a creative executive at Walt Disney Imagineering, explained what we can expect from the new ride:

“When the mischief that Peter Parker gets in, where Spider-bots are released all over the [Avengers] campus, he needs all of our help. That’s where we step up, we get in these vehicles, and we go on this crazy adventure through all different parts of the campus cleaning up and slinging webs right next to Spider-Man.”

The accompanying write-up clarifies that “guests on the attraction will be able to shoot their own webs out of their wrists via immersive technology.” Exactly what that technology is or how it works remains unclear. We’d previously assumed that the new ride might feature individual mounted web-shooters for each rider to shoot digital targets as the ride progresses, similar to Toy Story Mania. But when we saw the first concept art of the ride vehicle, there weren’t any mounted shooters present. 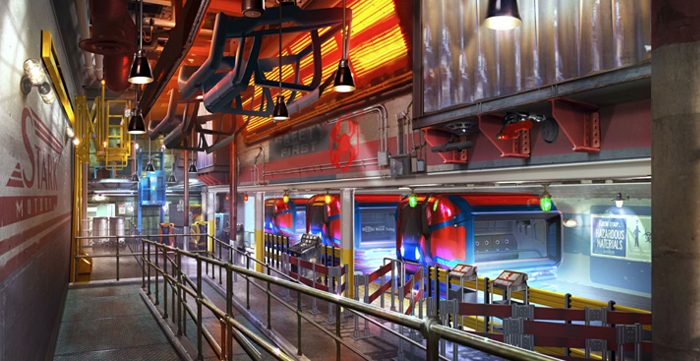 So, is each person going to be outfitted with their own web-shooters as they get on the ride, or will the tech somehow be able to react to everyone’s bare wrists as they’re being flung around the ride vehicle during the experience? Either option seems logistically difficult. Everyone’s wrists are different sizes, so creating a one-size-fits-all physical web-shooter may be tough to accomplish. But if there’s no sensor on guests’ wrists, will the ride be able to properly compute all of the necessary angles of webbing being fired throughout the ride? The concept art at the very top of this page doesn’t seem to include any devices on the riders’ wrists, but since it’s just concept art, I wouldn’t take that as hard proof that there won’t be a physical component just yet. But I look forward to finding out more about how this whole thing works.

We know Disney is looking to create an interconnected experience between these Marvel attractions in its theme parks similar to the way they’ve established a connected cinematic universe. The global Avengers Initiative across the park features narrative links between attractions like the Iron Man Experience, Ant-Man and the Wasp: Nano Battle!, Guardians of the Galaxy: Mission – BREAKOUT!, and more. You can read more about the Avengers Campus here.

The post Disneyland’s Spider-Man Ride Will Let You Fire Webs From Your Wrists Via Immersive Technology appeared first on /Film.