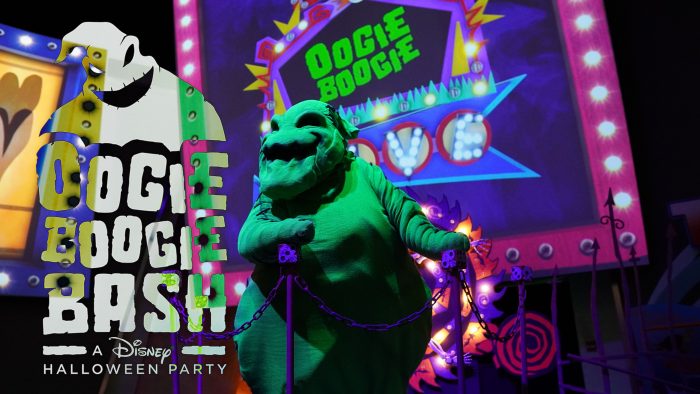 First up we head to Clarabelle’s and got the Hard Cider Float. It was soooo delicious. If you are a cider fan we highly recommend this special Halloweentime adult treat.

We then go over to Hollywoodland and try the Caramel Apple Churro. This was very very filling and tasty. However, it was $6.50 and I don’t think I’d ever order it again.

From there we go to our first treat trail and to our surprise it was the Oogie Boogie themed candy trail. We were met by Oogie Boogie himself and he was larger than life and quite impressive. I wish this character was around for meet and greets all year round!

Finally, Kitra got her drink. She tried the Worms, Dice, and Everything Nice drink. This lime-Mindori booze slushing with Oogie Boogie dice glow cubes was refreshing and totally worth the $21 price tag.

With our drink in hand it was now time to find the perfect spot for the Frightfully Fun Parade. This parade isn’t new (it is from Mickey’s Not So Scary Halloween Party from previous years at Disneyland) and it!is still as great as ever. The Headless Horseman leads the way and although this parade seemed a tad bit short, it is still really fun (frightfully even)!

Since we were so close to the water we made our way down to get front row seats to watch the new World of Color show Villainous. As you can tell by the clips of the show….it was not what we were expecting. It was definitely a good time, but definitely not the best World of Color overlay we’ve ever seen. Our favorite part of the show was getting sprayed by the water from being so close to the fountains. ?

Once the show was over we met up with our friends Tim and Jenn and together saw some rare Disney villains (Big Bad Wolf, Prince John, and The Sheriff of Nottingham) and explored Villains Grove. Villains Grove can be best summed up: “What dark magic awaits in Villains Grove? The Villains have taken root here, turning the forest into a magical grove of light and sound with mystical sights and sounds.”

We finished our night by exploring a few more candy trails and meeting The Evil Queen from Snow White and Maleficent who were both lovely. The immersive treat trails were for sure the highlight of the night and were so much more enjoyable than waiting in long lines to see the characters. It was fun to interact with the villains and get tons of candy to boot.

In conclusion, Oogie Boogie’s Bash was a blast and the only thing missing was a Halloween fireworks show (but don’t worry, you can still watch those fireworks at Disneyland on Friday, Saturday and Sunday during the holiday season for no extra cost!). We had a great time and although it was a bit pricey I’d still recommend going if you are a huge Disney Halloween fan and fan of free candy.

The post Video: We Went To ‘Oogie Boogie Bash’ 2019 Opening Nigh At Disney California Adventure appeared first on /Film.